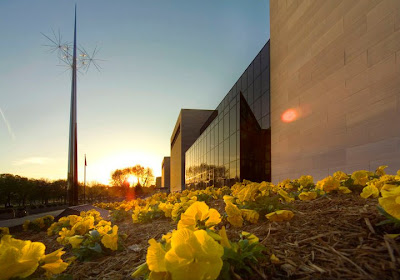 Dynamic Earth explores the inner workings of Earth’s climate system. With visualizations based on satellite monitoring data and advanced supercomputer simulations, the film follows a trail of energy that flows from the sun into the interlocking systems that shape the Earth’s climate: the atmosphere, oceans and the biosphere. Audiences will ride along on swirling ocean and wind currents, dive into the heart of a monster hurricane, come face-to-face with sharks and gigantic whales and fly into roiling volcanoes.

Dynamic Earth was created through a collaboration between Spitz Creative Media, the Advanced Visualization Lab at the National Center for Supercomputing Applications at the University of Illinois, NASA’s Scientific Visualization Studio and Thomas Lucas Productions Inc. The 24-minute film is narrated by Liam Neeson.

Undiscovered Worlds takes audiences on a journey beyond the solar system. With new achievements like the Kepler Telescope and rapidly improving technology, the discovery of exoplanets puts scientists one step closer to the possibility of finding an Earth-like world. This 25-minute film was developed by the Charles Hayden Planetarium at the Museum of Science in Boston.

Individual tickets for all regularly scheduled public screenings of Dynamic Earth and Undiscovered Worlds are on sale and may be purchased up to two weeks in advance. Groups of 10 or more may reserve tickets for any date during the film’s expected run. The public may visit any Smithsonian Theaters box office, call toll-free (866) 868-7774 or visit www.si.edu/IMAX for information or to purchase tickets.

Joe Kleimanhttp://wwww.themedreality.com
Raised in San Diego on theme parks, zoos, and IMAX films, InPark's Senior Correspondent Joe Kleiman would expand his childhood loves into two decades as a projectionist and theater director within the giant screen industry. In addition to his work in commercial and museum operations, Joe has volunteered his time to animal husbandry at leading facilities in California and Texas and has played a leading management role for a number of performing arts companies. Joe previously served as News Editor and has remained a contributing author to InPark Magazine since 2011. HIs writing has also appeared in Sound & Communications, LF Examiner, Jim Hill Media, The Planetarian, Behind the Thrills, and MiceChat His blog, ThemedReality.com takes an unconventional look at the attractions industry. Follow on twitter @ThemesRenewed Joe lives in Sacramento, California with his wife, dog, and a ghost.
Share
Facebook
Twitter
Linkedin
Email
Print
WhatsApp
Pinterest
ReddIt
Tumblr
Previous articleChildren are Worth their Age in Euros at Heide Park
Next articleNorthwestern Mutual Foundation Gives Half Million in Grants to Milwaukee Cultural Institutions