CNN stands to make millions – from each and every ticket and video sale and rental and from the ad dollars surrounding broadcast rights and other CNN coverage of the film, “Blackfish.”

UPDATED 1/13/14: InPark News Editor Joe Kleiman has written an independent report examining the editing used in Blackfish, which can be downloaded here in PDF format.  InPark Magazine did not participate in the creation or editing of this report.

EDITOR’S NOTE: The following piece by InPark’s Joe Kleiman first appeared in an expanded version titled Can a Beluga Make Jokes about a Blackfish? on his blog ThemedReality on December 13, 2013.  It is followed by An Open Letter from SeaWorld’s Animal Advocates, published by SeaWorld in major North American newspapers and on its website December 20, 2012.

It’s up to at least seven now: the number of big name performers who canceled their scheduled appearances for an upcoming concert series at SeaWorld Orlando, over concerns about allegations brought up in the recent documentary film Blackfish.  I have both seen the film, of which I was kindly sent a screener copy by distributor Magnolia Pictures, and read the related book Death at SeaWorld by David Kirby.  It is not my intent to either discredit or validate these works, though I can attest they follow a style of presentation that the animal rights movement established more than a quarter century ago.

At that time (1987), I was an intern at Sea World (in those days it was spelled as two words) when two big things took place – the construction of the new larger orca “birthing” pools and the sudden closure and overnight transit of animals from Marineland of the Pacific.  I spoke with the protesters at the gates and read the articles and literature coming out.  Much of what happened then, I blame on a man I call “The Bookseller,” William Jovanovich. As CEO and President of the theme park chain’s owner, book publisher Harcourt Brace Jovanovich, these were his decisions.  But since then, the park has changed ownership, first to Anheuser Busch, then Blackstone, and now it’s publicly held.  With ownership changes came management changes and radical departures in the way things are done, a point often skirted around in media coverage.  In essence, the SeaWorld of today is not the same chain that operated under HBJ.

If you are interested in the film or the book, I encourage you to watch and/or read them.  But don’t take them as gospel.  It’s important to have a well rounded understanding of this complicated issue, and I highly suggest that you contact organizations on both sides, including the Association of Zoos & Aquariums, the American Association of Zoo Veterinarians, the International Marine Animal Trainers Association, the Alliance of Marine Mammal Parks & Aquariums, the International Fund for Animal Welfare, the Center for Whale Research, the Animal Welfare Institute, and People for the Ethical Treatment of Animals.

peta is one of the biggest proponents of the film.  On the one hand, I agree with their stance on the American Human Association’s monitoring of animals on film and television sets.  It’s a farce.  And not many know that the program is overseen and financed by the Screen Actors Guild, a trade organization that, by its very admission, does not allow animals to be members. On the other hand, peta’s attempt to free SeaWorld’s orcas by claiming that holding them is in violation of the 13th Amendment was just as farcical. The judge was right to point out that the 13th only applies to humans.

There’s a fringe element as well supporting the film.  These folks troll the internet for any mention of SeaWorld and fight back with allegations of lies, and deceit, and “go watch Blackfish.”  At the slightest tweet of something as innocuous as a parade float, the trolls hit en masse.  They’ve hit me and I’ve had reports of them hitting numerous bloggers and reporters as well.

@ThemedReality @seaworld @zoos_aquariums @cnn but #seaworld u have to admit u screwed yourself by abusing animals for ticket sales! Now reap

This kind of approach to the film not only presents itself as hostile, but makes the film appear as if its intent is not “education” but rather “assault.” 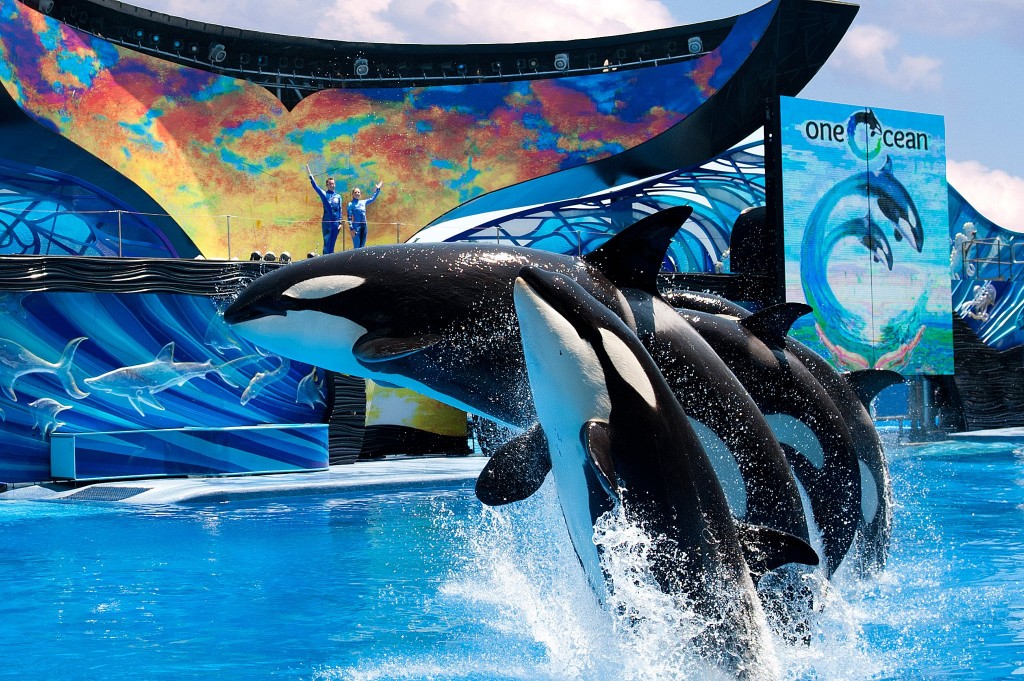 Then there’s CNN, the 24-hour cable network self-described as an outlet that “delivers the most comprehensive, nonpartisan and breaking news and analysis to global audiences across all platforms.” CNN has broadcast Blackfish a number of times over the past couple of months.  Each time it’s been broadcast, there’s been a noticeably sharp increase of anti-SeaWorld comments posted to the park’s Facebook and Twitter accounts, prompting SeaWorld to post on their Facebook page the evening of November 3:

This is a family friendly page, administered by SeaWorld Orlando, for the benefit and enjoyment of its fans. We welcome comments and if you have a question for us, we’ll do our best to answer it. We won’t tolerate offensive language or topics, though…

Much was made about SeaWorld’s reluctance to participate in CNN’s so-called discussion over the film.  Jack Hanna, who admitted to being a paid spokesman for the chain, did appear in a rather awkward appearance on air with the filmmakers and eventually SeaWorld’s Vice President of Communications, Fred Jacobs, responded in writing to prepared questions.  All this, of course, focused suspicion on SeaWorld and its motives.  But SeaWorld had very good reason not to participate.  Earlier this year, at the Sundance Film Festival, CNN’s new film unit acquired Blackfish, a fact not always mentioned in CNN’s web postings.  By demonizing SeaWorld and building interest in the film, CNN stands to make millions – from each and every ticket and video sale and rental and from the ad dollars surrounding broadcast rights and other CNN coverage of the film.

This situation puts me in mind of the recent 60 Minutes interview with Dylan Davies regarding his experience during the terrorist attack on the Benghazi consulate in Libya. When allegations of false testimony arose, 60 Minutes offered something of an apology for not having done a more thorough investigation, but never admitting to doing wrong. As npr’s media watchdog show On the Media pointed out, the segment was tied in with a book written by Davies and published by CBS’s publishing arm, Simon & Schuster, a fact that was never disclosed on air.

Although it’s hard to tell what kind of direct impact CNN’s treatment of Blackfish is having on attendance at SeaWorld’s parks, the aforementioned concert cancellations do show that it is indeed impacting the park’s operations. One great point of irony is that CNN is owned by TimeWarner, which has owned parks with marine life animals and continues to conduct business with parks and aquariums that do so.

CNN’s parent TimeWarner once had an ownership stake in both Six Flags and Village Roadshow Theme Parks. During that time, parks under their ownership featured performing marine mammals, including two dolphins at Six Flags Great Adventure in New Jersey. CNN’s sister company Warner Bros. continues to license its properties to Six Flags and Village Roadshow. One of the Six Flags parks, Discovery Kingdom, which had not been owned by TimeWarner, had a performing orca until it was moved to SeaWorld in August 2012, and while it had that orca, that Six Flags park continued to run shows and attractions based on Warner Bros. characters.

Warner Bros.’ film The Polar Express has for numerous years, including 2013, played onscreen at numerous zoos and aquariums that house marine mammals. One of those happens to be SeaWorld Orlando, the very park targeted in Blackfish, where the Polar Express Experience culminates with a visit with Santa at the North Pole, where he is accompanied by live belugas and polar bears.

CNN’s immediate parent, Turner Broadcasting, in 1991 purchased Hanna Barbera, which from 1978 to 1982 operated Marineland of the Pacific near Los Angeles, which featured two performing orcas that eventually found their way to SeaWorld. Turner Broadcasting is a corporate sponsor of the Georgia Aquarium, with which the “Inside CNN Studio Tour” offers a joint ticket.  The aquarium houses belugas and performing dolphins.

I’ve been paying close attention to CNN’s coverage but haven’t seen them disclose any of the above corporate information.

The issues surrounding the film and SeaWorld are obviously – unlike an orca – not black and white.

SeaWorld: The Truth Is in Our Parks and People 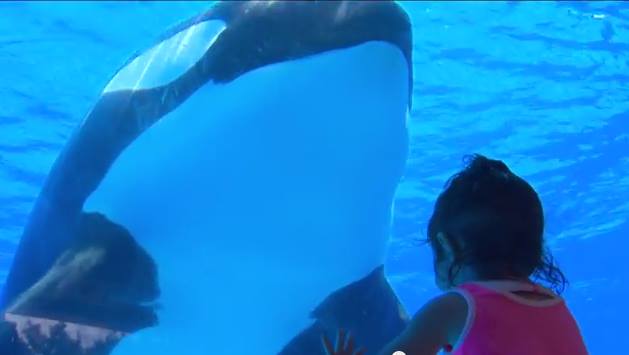 Inaccurate reports recently have generated questions about SeaWorld and the animals in our care. The truth is in our parks and people, and it’s time to set the record straight.

The men and women of SeaWorld are true animal advocates. We are the 1,500 scientists, researchers, veterinarians, trainers, marine biologists, aquarists, aviculturists, educators and conservationists who have dedicated our lives to the animals in our care as well as those in the wild that are injured, ill or orphaned. Whether it’s a sea lion, manatee, sea turtle or whale, we are on call 24/7.

Here are some important facts about SeaWorld and our work:

At SeaWorld, this has been our calling since we first opened our doors 50 years ago. It is a responsibility we do not take lightly. More than 400 million guests have visited SeaWorld. We are proud that their experiences here have a lasting and positive impact on them, and on the world in which we live.

The truth about SeaWorld is right here in our parks and people. Our guests may enter our gates having never given much thought to the remarkable animals in our oceans. When they leave with a greater appreciation for the importance of the sea, educated about the animals that live there and inspired to make a difference, we have done our job.

Joe Kleimanhttp://wwww.themedreality.com
Raised in San Diego on theme parks, zoos, and IMAX films, InPark's Senior Correspondent Joe Kleiman would expand his childhood loves into two decades as a projectionist and theater director within the giant screen industry. In addition to his work in commercial and museum operations, Joe has volunteered his time to animal husbandry at leading facilities in California and Texas and has played a leading management role for a number of performing arts companies. Joe previously served as News Editor and has remained a contributing author to InPark Magazine since 2011. HIs writing has also appeared in Sound & Communications, LF Examiner, Jim Hill Media, The Planetarian, Behind the Thrills, and MiceChat His blog, ThemedReality.com takes an unconventional look at the attractions industry. Follow on twitter @ThemesRenewed Joe lives in Sacramento, California with his wife, dog, and a ghost.
Share
Facebook
Twitter
Linkedin
Email
Print
WhatsApp
Pinterest
ReddIt
Tumblr
Previous articleMerlin Enters New Strategic Partnership with Hongkong Land for Expansion in China
Next articleComparing US pavilion plans for Milan 2015 with Genoa ’92