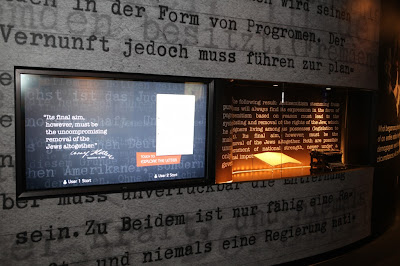 Los Angeles, CA, USA — When the Museum of Tolerance in Los Angeles acquired an early letter written by Adolf Hitler, it turned to Electrosonic to create an interactive exhibit for one of the most important archival documents in the history of the Second World War.

The letter was written in September 1919 and is the only document personally signed by Hitler, linking him to the elimination of the Jewish people. In the letter, Hitler calls for “an anti-Semitism based on reason…[whose]…final aim, however must be the uncompromising removal of the Jews altogether.” The letter was found by an American GI in Nuremberg in 1945.

The four-page typewritten letter was purchased last spring by Rabbi Marvin Hier, founder and dean of the Simon Wiesenthal Center, who called the letter “the most significant ever acquired” by the Center. The letter was written six years before Mein Kampf was published.

The letter’s acquisition was widely covered by the New York Times, the International Herald Tribune, and the media around the world.

Electrosonic has been responsible for many exhibits and permanent installations since the Museum of Tolerance opened in 1993 as an educational arm of the Simon Wiesenthal Center.

Electrosonic sales consultant Les Hill and VP of Entertainment Chris Conte collaborated with Sue Burden, Chief Financial Officer and Chief Administrative Officer of the museum, to determine the best way to showcase the letter. In order to allow the guests to explore the letter in depth, Electrosonic recommended that a multi-touch surface be installed along with digital content generated from the letter itself. To insure that the best digital content was created, Electrosonic turned to long-time creative content partner Cortina Productions to develop the content and interactive software.

The artifact itself is housed in a wall-mounted glass display case along with a 65-inch Mitsubishi LED touchscreen. The touchscreen is powered by CyberTouch. Museum visitors stand in front of the touchscreen to view content crafted by Cortina Productions, which allows them to virtually interact with the letter, reading it in the original German language or translated into English. A graphic image of a magnifying glass enlarges portions of the letter for easier inspection.

“The GUI can be operated by two users at the same time,” says Electrosonic project manager Guy Fronte. “In addition to the user mode for one or two visitors, there’s also a docent mode for museum docents making presentations to groups.”

Visitors can also access major milestones in the history of the Third Reich, as well as, news articles, maps and still photos, plus video clips about the acquisition of the letter in 2011.

Electrosonic provided a Dell Vostro 460 Mini Tower with an ATI Radion HD 5570 graphics card as the interactive video source for the touchscreen display. A ceiling-mounted Dakota speaker array supplies audio for the film clips and sound design elements for the interactivity.

“The Hitler letter exhibit has been a very successful attraction with visitors,” says Sue Burden. “Electrosonic was very professional to work with, as always; it’s a pleasure to do projects with them, and we keep asking them to do more and more things for us.”

At Electrosonic, Win Roach was the exhibit’s lead installer and Julie Adgurson the engineer. All of the vendors worked with the architect, Hansol Park, a Senior Associate with Yazdani Studio of Cannon Design.


ABOUT ELECTROSONIC
Electrosonic is an international audio-visual company that creates tailored, state-of-the-art solutions for a wide range of markets including theme parks, museums, video conferencing and control rooms. Since its founding in 1964, Electrosonic has built a strong reputation for working on complex projects, both large and small, and has developed lasting partnerships with customers and suppliers. Beyond complete integrated systems, Electrosonic provides a comprehensive scope of services including technical design, projector lamp sales, maintenance and operational support. www.electrosonic.com

Joe Kleimanhttp://wwww.themedreality.com
Raised in San Diego on theme parks, zoos, and IMAX films, InPark's Senior Correspondent Joe Kleiman would expand his childhood loves into two decades as a projectionist and theater director within the giant screen industry. In addition to his work in commercial and museum operations, Joe has volunteered his time to animal husbandry at leading facilities in California and Texas and has played a leading management role for a number of performing arts companies. Joe previously served as News Editor and has remained a contributing author to InPark Magazine since 2011. HIs writing has also appeared in Sound & Communications, LF Examiner, Jim Hill Media, The Planetarian, Behind the Thrills, and MiceChat His blog, ThemedReality.com takes an unconventional look at the attractions industry. Follow on twitter @ThemesRenewed Joe lives in Sacramento, California with his wife, dog, and a ghost.
Share
Facebook
Twitter
Linkedin
Email
Print
WhatsApp
Pinterest
ReddIt
Tumblr
Previous articleMain Event Prepares to Open Third Houston Area FEC in Late 2012
Next articleDalniels Wood Land Offers New Shooting Gallery