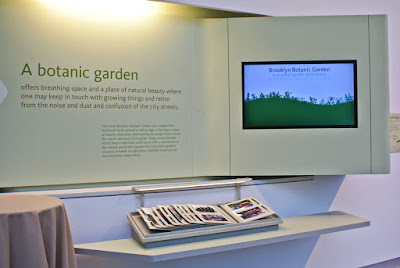 London, UK — With the opening of the Brooklyn Botanic Garden’s (BBG) new Visitor Center and gateway, visitors can now orient themselves to the garden, learn about its current blooms and plantings, and browse the event schedule via a series of interactives supported by Electrosonic for exhibit fabricator Hadley Exhibits.

Founded in 1910, BBG is an independent, non-profit institution committed to education, science and horticultural display. BBG has served communities in New York City and around the world through its extraordinary gardens and living collections, and by pioneering educational and community programs. Situated on 52 acres in the heart of Brooklyn and originally laid out by the Olmstead Brothers landscape design firm, BBG is home to more than 12,000 types of plants and hosts more than 725,000 visitors annually.

The unique design of the new Visitor Center – a grass and tree-covered berm tucked into the natural setting – seamlessly melds architecture and landscape. The energy-efficient structure from the firm of Weiss/Manfredi features a glass wall, which stretches from the entryway to enclose the pavilion and house exhibition space where visitors access an array of interactive exhibits to get a feel for how to visit the BBG. Thinc Design was the exhibition designer for the new space.

Electrosonic faced numerous challenges in the Visitor Center. Working on a very tight schedule, the project required extensive coordination with Hadley Exhibits to ensure that all equipment fit smoothly and tightly inside wall-mounted and table-style interactives. Since the exhibits were designed to feature content that’s easily modified and updated, the AV components were selected to be flexible and easily maintained by BBG staff. For proper viewing of the content, Electrosonic also specified monitors offering optimum performance in the bright ambient light emitted by the new structure’s glass wall.

“The interior space is actually a window onto the gardens, so there’s a lot of ambient light streaming in and a lot of glare,” says Electrosonic account manager Bryan Abelowitz. “We revised our monitor selection to Samsung DX series high-brightness monitors, which have sensors that automatically adjust to light levels.” 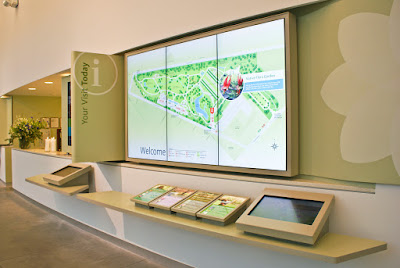 Adjacent to the map is a portrait-mode 46-inch Samsung LCD monitor displaying Today’s Events, an ever-changing roster of BBG happenings. A graphical Bloom Calendar is mounted perpendicular to the events schedule with another Dell interactive PC on the shelf below.

A portrait-mode 27-inch Samsung LED display with mount, which appears to float against the glass wall, features a video of BBG employees challenging visitors to a plant identification quiz. The display is fed by another Adtec signEdje HD MPEG player. 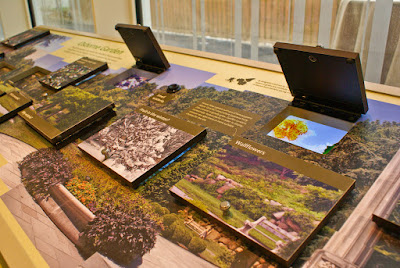 The most innovative interactives in the space are three peek-a-boo tables detailing different areas of the garden and how visitors can explore by using their senses. Hinged, three-dimensional photos of trees, plants and birds can be lifted by small knobs to reveal 6-inch LCD screens; short films about the image in the photograph begin to play when the hatches are lifted.

“Small, solid-state Technovision MPEG players in the tables are triggered by a magnetic switch built into the hinge,” says Abelowitz. Additional push buttons on the tables enable visitors to hear the sounds of the garden and sniff the fragrances of the blooms.

Electrosonic also provided a custom AMX control system to streamline operations and allow non-professionals to maintain efficient control of the system. BBG purchased a small back up roster of equipment, which Abelowitz calls “a very smart thing to do,” as the Visitor Center’s interactives experience daily wear and tear.

The control room is housed in the basement under the exhibit area. Two equipment racks are outfitted with source, control and monitoring equipment; centralized control allows for remote monitoring. Electrosonic furnished systems training for BBG staff and will be providing onsite maintenance and technical support for the first year of the Visitor Center’s operation.

“Electrosonic was wonderful — very attentive, very knowledgeable and willing to help. Everyone was great,” commented Sonal Bhatt, director of interpretation and exhibitions at Brooklyn Botanic Garden.

At Electrosonic, Ellen Simich was the project manager and Ed O’Connor project engineer.

Joe Kleimanhttp://wwww.themedreality.com
Raised in San Diego on theme parks, zoos, and IMAX films, Joe Kleiman would expand his childhood loves into two decades as a projectionist and theater director within the giant screen industry. In addition to his work in commercial and museum operations, Joe has volunteered his time to animal husbandry at leading facilities in California and Texas and has played a leading management role for a number of performing arts companies. Joe has been News Editor and contributing author to InPark Magazine since 2011. HIs writing has also appeared in Sound & Communications, LF Examiner, Jim Hill Media, and MiceChat. His blog, ThemedReality.com takes an unconventional look at the attractions industry. Follow on twitter @ThemesRenewed Joe lives in Sacramento, California with his fiancé, two dogs, and a ghost.
Share
Facebook
Twitter
Linkedin
Email
Print
WhatsApp
Pinterest
ReddIt
Tumblr
Previous articleAstronaut Neil Armstrong Dead at 82
Next articleSanta Cruz Beach Boardwalk Announces Northern Calfiornia’s Only Spinning Coaster