Fredrikstad, Norway — Underlining its ability to provide projectors of different types and specifications to support a single AV project, Norway’s projectiondesign® has supplied core technology to Electrosonic for the new building of the National Museum of American Jewish History in Philadelphia. Electrosonic was the main contractor involved with the installation of audiovisual equipment and systems throughout the building.

Electrosonic was tasked with delivering AV systems that met the needs of media consultancy RomeAntics and media designer and producer Local Projects.

“Almost all the smaller screens at the NMAJH that require projection use projectiondesign,” explains Bryan Abelowitz, system sales consultant at Electrosonic. 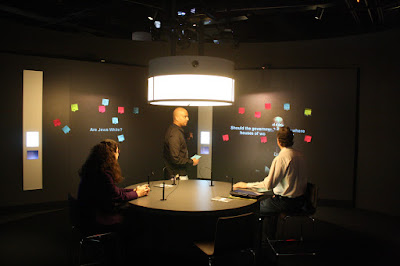 Depending on the throw distance, image brightness and resolution required at each location, Electrosonic selected projectiondesign F12, F22, or F32 projectors, and Abelowitz is pleased with their size and performance.

Anders Løkke, Marketing Director, projectiondesign, adds: “Integrators are often asked to specify equipment from as small a number of suppliers as possible, and in circumstances like these it’s important for a manufacturer to have a wide range of products to meet different technical and application needs. This is exactly what we at projectiondesign strive to achieve, and we are delighted to have been able to supply projectors from three of our product lines to Electrosonic for the new NMAJH building in Philadelphia.” 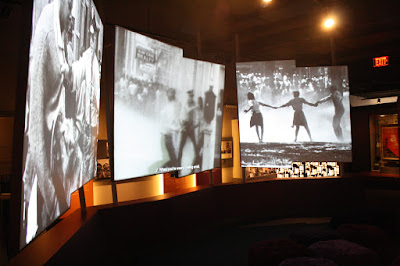 The NMAJH is the only American museum dedicated solely to telling the story of Jews in the US, from their arrival more than 350 years ago to the present day. The museum’s new building offers exhibits over four floors, with themes ranging from ‘Dreams of Freedom’ to ‘Moving to America’, ‘Establishing Communities’, and ‘It’s Your Story’.

A variety of AV techniques are used to bring these themes to life, including the edge-blending of multiple projected images, image-masking, and a mixture of flat and curved screens, as well as the integration of projection and LCD panel technologies.

About projectiondesign
projectiondesign is a Norwegian company that designs, manufactures and markets a range of high performance projectors for professional, business and consumer applications. Amongst its core markets are high resolution scientific visualization, visual training and simulation, medical imaging, broadcast and post production, public media and entertainment. Numerous industry milestones that distinguish projectiondesign’s award winning, innovative technology include the introduction of the world’s first single-chip SXGA DLP projector in 2002, the first commercially available 1080p DLP projector in 2006, the first WUXGA resolution DLP projector, and the first portable and high-resolution active 3D stereoscopic projector in 2008. In 2009, projectiondesign introduced its first 3-chip projector and debuted LED illumination. 2010 signified the company’s first image warp and blend product with the Multi Image Processors, as well as the world premiere of the WQXGA resolution (2,560 x 1,600) projector, and revolutionary patented Remote Light Source technology. The entire professional product range is warranted for 24/7 usage. projectiondesign is located in Fredrikstad, Norway, with representatives in more than 20 offices throughout the world, and regional headquarters in New York and Beijing.


For further information about this and other leading products please visit projectiondesign.com or contact:

Joe Kleimanhttp://wwww.themedreality.com
Raised in San Diego on theme parks, zoos, and IMAX films, InPark's Senior Correspondent Joe Kleiman would expand his childhood loves into two decades as a projectionist and theater director within the giant screen industry. In addition to his work in commercial and museum operations, Joe has volunteered his time to animal husbandry at leading facilities in California and Texas and has played a leading management role for a number of performing arts companies. Joe previously served as News Editor and has remained a contributing author to InPark Magazine since 2011. HIs writing has also appeared in Sound & Communications, LF Examiner, Jim Hill Media, The Planetarian, Behind the Thrills, and MiceChat His blog, ThemedReality.com takes an unconventional look at the attractions industry. Follow on twitter @ThemesRenewed Joe lives in Sacramento, California with his wife, dog, and a ghost.
Share
Facebook
Twitter
Linkedin
Email
Print
WhatsApp
Pinterest
ReddIt
Tumblr
Previous articleGolden Gate National Parks Conservancy Turns to Cinnabar For Two Leading Edge Visitor Centers
Next articleWhiteWater West Opens New Office in Barcelona