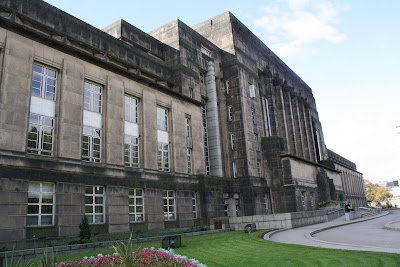 Edinburgh, UK — Electrosonic has successfully upgraded some of the key audio/visual components in the Scottish Government’s Media Centre at St. Andrew’s House in Edinburgh. The Centre has the facility to run presentations, record proceedings and relay images to an adjacent room.

Electrosonic’s Edinburgh office refreshed the essential presentation equipment in “Media 1” (seating 70), “Media 2” (a small briefing/meeting or overflow room), a preparatory “Green Room” supporting Media 1 & 2, a back projection room (for main control and video routing equipment), and a control room (housing video preview and audio equipment). The original equipment was installed around 12 years ago and overdue a refresh.

Carolyne Thomson, Scottish Government Project Manager spoke about the work carried out by the Electrosonic team: “They listened carefully to what we wanted to achieve and they came up with some very good ideas. They worked hard and we are very happy with the results, which actually exceeded our expectations.”

St Andrew’s House is the headquarters building of the Scottish Government and journalists are often briefed on Government news announcements via the facilities in the Media Centre.

Audio performance is of paramount importance since a number of events can be “on the record”. It is essential that the media can acquire “clean” audio signals, that those in the Centre can hear everything with crystal clarity, and that good archive recordings can be made. Media 1’s automatic/manual audio system is equipped with two Polycom C16 Sound Structure units for principal routing and mixing, along with a Soundcraft CPM12 for manual control. Media 1’s stage lighting is LED based and controlled by an Artistic License preset control panel.

Each Media 1 speaker position is equipped with a beyerdynamic MPR211 controlled pick-up line array microphone. These are unobtrusive both to the presenters and to the audience. A Polycom HDX mic array (for overall pick-up) and beyerdynamic Opus 650 radio mics are also on hand. An appropriate number of isolated audio feeds have also been provided for media attendees.

Media 1’s most important display is the rear projection screen which is built into the stage setting. The screen is a DNP New Wide Angle model, used in conjunction with a Barco RLM W8 projector behind it. The room is flanked by three Vaddio Wallview 50 remote controlled cameras. Other video inputs include two Roku Brightsign HD video players (for pre-recorded and backdrop material), and computer image inputs are accessible through floor boxes. The system also includes an Extron MGP picture-in-picture processor to allow the presentation of multiple images. The projector receives its images as DVI from an Extron DXP84 matrix. For maximum flexibility, an Extron 12×12 RGBHV matrix has been included.

Media 2, a less complex space, contains one Vaddio Wallview 50 remote controlled camera, as well as an interactive 70-inch LCD monitor (Smart Technologies/NEC SB8070i), which can be used to relay proceedings from Media 1. There is also an NEC 46-inch LCD monitor in the Green Room.

The primary controller for Media 1 is an AMX NI4000, connected directly to devices located in the same rack, but via Ethernet to remote equipment. An Ethernet to DMX converter is provided for lighting control. The NI4000 can be controlled by a standard AMX touch screen in the control room, from push buttons near the room curtains, or from an Apple iPad.

Electrosonic continue to support the Scottish Government with a three year service agreement, offering services such as telephone and emergency service support. “The on-going support and service we have received – even in the short period since the refresh has been first class, and reassuring,” concluded Carolyn Thomson.

Electrosonic’s dedicated team appreciates the Communications Division of the Scottish Government’s excellent leadership, attentiveness and enthusiasm. Sub-contractors were Blacklight for specialist lighting, Laurence McIntosh for lectern and stage desks, Colinton for other furniture and Mitie, who was the main fit-out contractor.

ABOUT ELECTROSONIC
Electrosonic is an international AV company with a strong reputation for working on complex projects, both large and small, and has through its 47 year history developed lasting partnerships with customers and suppliers. Electrosonic brings a unique breadth of experience to each project; backed by solid engineering skills, project management and quality production facilities. Beyond complete integrated systems, Electrosonic can provide a wide range of services including technical design, maintenance and operational support. www.electrosonic.com

Joe Kleimanhttp://wwww.themedreality.com
Raised in San Diego on theme parks, zoos, and IMAX films, Joe Kleiman would expand his childhood loves into two decades as a projectionist and theater director within the giant screen industry. In addition to his work in commercial and museum operations, Joe has volunteered his time to animal husbandry at leading facilities in California and Texas and has played a leading management role for a number of performing arts companies. Joe has been News Editor and contributing author to InPark Magazine since 2011. HIs writing has also appeared in Sound & Communications, LF Examiner, Jim Hill Media, and MiceChat. His blog, ThemedReality.com takes an unconventional look at the attractions industry. Follow on twitter @ThemesRenewed Joe lives in Sacramento, California with his fiancé, two dogs, and a ghost.
Share
Facebook
Twitter
Linkedin
Email
Print
WhatsApp
Pinterest
ReddIt
Tumblr
Previous articleWilderness Hotel & Golf Resort Bringing Indoor Ropes Course to Wisconsin Dells
Next articleLEC Worldwide Enters Into Strategic Alliance with Shenzhen Unite Environmental Art Project Co.