Endeavor’s Flight to Los Angeles Set for Sept 17; Will Conduct Low-Level Flyovers of Iconic NASA Facilities Across Southern US 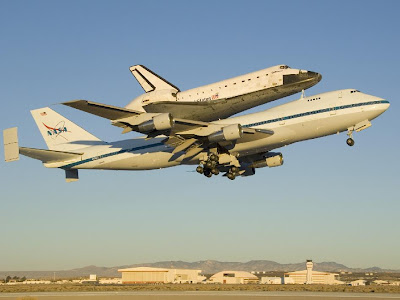 On Oct. 11, 2011, NASA transferred title and ownership of Endeavour to the California Science Center inLos Angeles. Under the terms of a Space Act Agreement with the science center, NASA will safely transport Endeavour to LAX for a planned arrival on Thursday, Sept. 20.

In cooperation with the Federal Aviation Administration, the SCA is scheduled to conduct low-level flyovers at about 1,500 feet above locations along the planned flight path. The exact timing and path of the ferry flight will depend on weather conditions and operational constraints. Some planned flyovers or stopovers could be delayed or cancelled. If the ferry flight must be postponed for any reason, an additional advisory will be issued.

At sunrise on Sept. 17, the SCA and Endeavour will depart Kennedy’s Shuttle Landing Facility and perform a flyover of various areas of the Space Coast, including Kennedy, the Kennedy Space Center Visitor Complex, Cape Canaveral Air Force Station and Patrick Air Force Base.

The aircraft will fly west and conduct low flyovers of NASA’s Stennis Space Center in Mississippi and the agency’s Michoud Assembly Facility in New Orleans. As it arrives over the Texas Gulf Coast area, the SCA will perform low flyovers above various areas of Houston, Clear Lake and Galveston before landing at Ellington Field near NASA’s Johnson Space Center. Weather permitting, the SCA and Endeavour will stay at Ellington the remainder of Sept. 17 and all day Sept. 18.

At sunrise on Wednesday, Sept. 19, the aircraft will depart Houston, make a refueling stop at Biggs Army Airfield in El Paso, Texas, and conduct low-level flyovers of White Sands Test Facility near Las Cruces, N.M., and NASA’s Dryden Flight Research Center at Edwards Air Force Base in California, before landing around mid-day at Dryden.

On the morning of Sept. 20, the SCA and Endeavour will take off from Dryden and perform a low-level flyover of northern California, passing near NASA’s Ames Research Center at Moffett Field, Calif., and various landmarks in multiple cities, including San Francisco and Sacramento.  The aircraft also will conduct a flyover of many Los Angeles sites before landing about 11 a.m. PDT at LAX.

“Endeavour’s flight over Los Angeles’ most picturesque landmarks will be a sight to inspire Angelenos for generations,” Los Angeles Mayor Antonio Villaraigosa said. “Witnessing the shuttle’s final flight over the Griffith Observatory, Hollywood Hills and our historic City Hall will be a sight to behold. I am proud to welcome this world-class landmark to its new home in the City of Angels.”

California Science Center Foundation President Jeffrey Rudolph noted, “It’s great that the people ofCalifornia will be able to see this remarkable flyover. It has great potential to inspire the next generation of explorers and innovators. We encourage everyone to come see it at the Science Center when it reaches its final destination here at the Samuel Oschin Space Shuttle Endeavour Display Pavilion when it opens on October 30.”

After arrival at LAX, Endeavour will be removed from the SCA and spend a few weeks at a United Airlines hangar undergoing preparations for transport and display. Endeavour then will travel through Inglewood andLos Angeles city streets on a 12-mile journey from the airport to the science center, arriving in the evening on Oct. 13.

Beginning Oct. 30, the shuttle will be on display in the science center’s Samuel Oschin Space Shuttle Endeavour Display Pavilion, embarking on its new mission to commemorate past achievements in space and educate and inspire future generations of explorers.

For information about NASA’s transfer of space shuttles to museums, visit: http://www.nasa.gov/transition

For more about NASA missions and programs, visit: http://www.nasa.gov

Joe Kleimanhttp://wwww.themedreality.com
Raised in San Diego on theme parks, zoos, and IMAX films, InPark's Senior Correspondent Joe Kleiman would expand his childhood loves into two decades as a projectionist and theater director within the giant screen industry. In addition to his work in commercial and museum operations, Joe has volunteered his time to animal husbandry at leading facilities in California and Texas and has played a leading management role for a number of performing arts companies. Joe previously served as News Editor and has remained a contributing author to InPark Magazine since 2011. HIs writing has also appeared in Sound & Communications, LF Examiner, Jim Hill Media, The Planetarian, Behind the Thrills, and MiceChat His blog, ThemedReality.com takes an unconventional look at the attractions industry. Follow on twitter @ThemesRenewed Joe lives in Sacramento, California with his wife, dog, and a ghost.
Share
Facebook
Twitter
Linkedin
Email
Print
WhatsApp
Pinterest
ReddIt
Tumblr
Previous articlePlanet Snoopy Expanding at Kings Dominion
Next articleProducers of "Paranormal Activity" Franchise Opening Haunted Attraction in Downtown Los Angeles