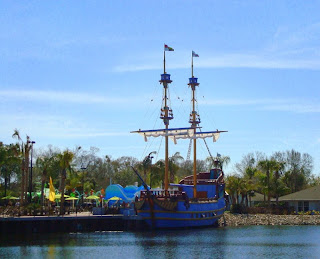 Jacksonville, FL – Environs of Jacksonville Florida is renowned for creating themed and immersive environments for amusement parks, family entertainment centers, museums, zoo’s, hotels, resorts and more. One of Environs’ talents is large scenic ships found in amusement parks, resorts, FECs and other venues across the USA and the Caribbean.

The company’s newest creation is a giant 90’ miracle ship which has been custom designed and fabricated for Give Kids The World Village in Orlando, FL. The ship – named Serendipity – has taken 6 months to build and was revealed for the first time on March 7th 2010 when the Village celebrated Founder’s Day and the grand opening of the new ‘Park of Dreams’ area.

Not only is the Serendipity the largest scenic ship to be developed by Environs to date but this particular ship has a special place in the company’s heart. Serendipity is a donation to Give Kids The World Village whose mission is to provide magical memories for children with life-threatening illnesses and their families. Wish families are granted a week-long cost-free fantasy vacation at the non-profit Give Kids The World Village, complete with accommodation, meals, transportation and donated attraction tickets for the major Orlando based amusement park. Since its opening in 1989, Give Kids The World has welcomed over 100,000 Wish families.

“Knowing our ship will help to provide joy and a sense of wonder for the families at Give Kids The World is truly special” says CEO Derek Mercer who made the decision to donate the $650,000 ship in the summer of 2009. “There’s so many things about the human brain that we don’t know and if this ship can help to bring a positive attitude and a renewed sense of energy to these children, who knows what that can do in their battle against their illnesses.”

The Serendipity is one of the new attractions in the newly enhanced and expanded ‘Park of Dreams’ which is the Village’s water based attraction area complete with a zero depth pool as well as an interactive water garden. Due to an ever increasing number of visiting families, the activities in the area needed further expansion and the Village also wanted to offer guests greater entertainment options. The results are going to be ‘Dive-in’ movies which will be projected onto the ship’s massive sail suspended from the 60’ tall masts. The ship deck will also provide a stage for live entertainment shows as well as form the perfect back drop for the Village’s weekly Pirates & Princesses parties.