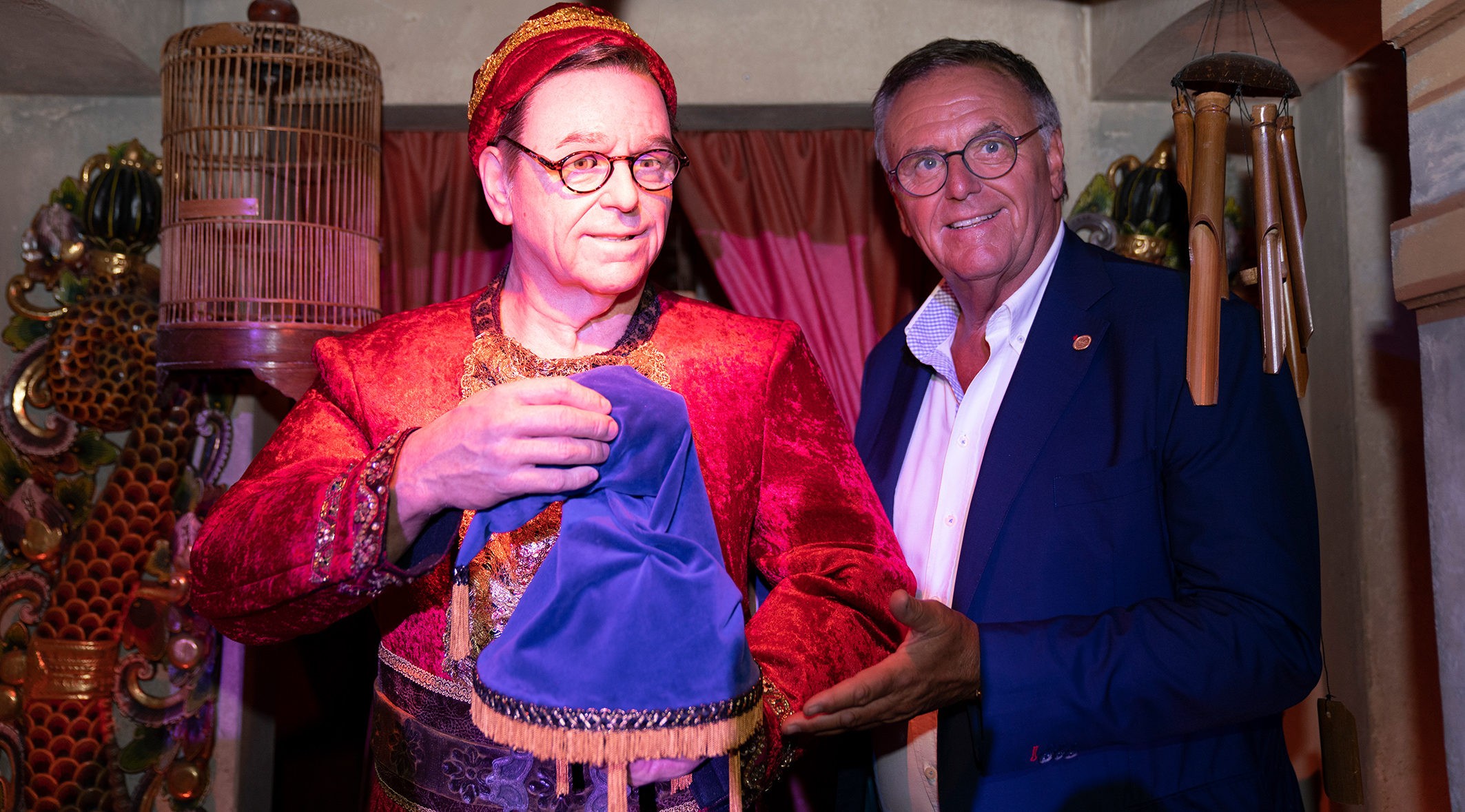 On July 28, 2020, the popular and detailed themed ride Pirates of Batavia reopened with elaborately designed scenes. The Mack Rides boat trip celebrated its premiere in 1987 and has been updated without losing the scenes that visitors love. The route corresponds exactly to the original ride.

The storyline, courtesy of Europa-Park:

“The sun slowly sets behind the wooden gables of the port city of Batavia and bathes the houses in a golden light. But this picturesque image is deceptive… as the pirates are in town! Bartholomeus van Robbemond and Diablo Cortez are on a spectacular chase through Indonesia. The magical object of their desire is a dagger that renders its owner invulnerable – the Fire Tiger!

“The journey begins very quietly in the Netherlands – in a Dutch bar. Pirates and nasty drunkards were raging around here just hours earlier. Half-empty and overturned beer mugs stand on the dark wooden tables, a chandelier hangs from the ceiling. It smells of schnapps, grog and sweat. Empty beer barrels, overturned tables and chairs testify to a wild binge which saw the pirates knocking quite a few back. A quaint brewery sits right behind the bar. This is where the pack stocks up with supplies. The beer barrels tower up to the roof.

“The journey then continues into a mystical space, where the walls are covered with countless land and sea maps from all over the world and exotic props can be found everywhere – a real collection of souvenirs.

“Bartholomeus van Robbemond suddenly stands in front of the illustrious tour group. He tells of his mysterious search, where he uses a magic treasure map to find the Fire Tiger, a magical dagger, and invites all to accompany him on his adventure.

“Boats are already waiting in front of the water lock for the daring passengers who wish to follow the pirate. The anchors are raised. Aye, aye captain! An exciting journey begins. Will it be a dangerous undertaking?

“The ship is heading for a violent storm after a short journey. The waves whip up, flashes of lightning illuminate the pitch-black sky, and a threatening rumble can be heard. Heavy rain hits the planks. The rigging creaks ominously under the weight of the wind. Suddenly the boat approaches a meter-thick wall of fog and plunges into the depths. Shiver me timbers! That was nerve-wracking. The storm has led the adventurers into an Indonesian gorge. Van Robbemond’s boat has not weathered the storm, however, as the wreck now lies splintered on its side.

“Breathtaking waterfalls splash down on both sides. The jungle intoxicates with its variety of smells and noises. Monkeys and birds can be heard. Huge ships can be seen in the background, including the ship of Cortez. Van Robbemond is looking for the magic map that shows him the way to the Fire Tiger. The pirate friend, with his comrade Jopie the cheeky otter, hopes to find them in the nearby village.

“It starts to get dark. The residents of the stilt city are preparing for tomorrow’s market. The streets are busy. The village elder tells exciting stories by flickering candlelight, surrounded by the young and inexperienced children who listen quietly. Bartholomeus van Robbemond takes advantage of the moment and can navigates through with the remains of his treasures.

“A wild expedition is ahead. The landlubbers are now approaching a pirate battle. Cannons thunder through the air, the masts of sunken ships line the way. Only the skull and crossbones flags still flutter in the wind. Many pirates are walking the planks here. Van Robbemond can also be seen again and should be careful – Diablo Cortez has sneaked on board his boat. After a wild duel, he and Jopie are pushed onto the plank. The ship of the adventurers watching the scene can barely navigate and circle the battlefield unscathed.

“Yo-ho-ho! Saved! The residents of Batavia pull van Robbemond and his otter out of the water and save their lives. Behind the thick city walls, the safe, pulsating city attracts and invites visitors into joyous celebration. Indonesian sea shanties ring through the streets and pitchers full of the best rum make their way round. But Batavia is not a fun place for everyone: Many a pirate captain is behind bars. That is exactly where van Robbemond finds himself, and he can only hope for freedom.

“No sooner have visitors left the settlement than the damp fog of the Indonesian jungle envelops the boat and inmates. The barge slowly sails through lush green thickets. A deep growl rumbles through the jungle. In the distance, you can see the familiar face of van Robbemond, who prevails in the final fight against opponent Cortez. Only a few metres separate him from what he seeks, the magical dagger that appears to hover in the middle of a temple. Its power is obvious. The room seems to vibrate with power. The pirate approaches quickly.

“Arr! What an exhausting journey, but now he has done it. The Fire Tiger is in his hands. Bartholomeus van Robbemond quickly packs it into his treasure chest; the powers of the dagger are too dangerous to be given to someone else. He is now its guardian.

“The boats slowly drift back into the harbour. While the Indonesian restaurant Bamboe Baai is waiting on the port with exotic delicacies and enchanting aromas, the finest spices in Asia that makes your stomach growl. To starboard awaits a horde of greedy monkeys, who have sneaked around Cortez again and again, and are now delighted with the stolen goods.

“The wild adventure has passed! As they approach safe anchorage, the sailors happily take each other into their arms. The Fire Tiger is safe. Good has prevailed.”

‘Pirates in Batavia’ is a blockbuster 8-minute boat ride for the whole family. In each of the 17 boats, 16 passengers can go on an adventurous journey with Bartholomeus van Robbemond. Over 80 figures, with the latest technology and delicate movements, create the exciting life of the Indonesian colony full of countless pirates in the Dutch themed area of Germany’s largest theme park.

The Indonesian restaurant ‘Bamboe Baai’ also lures visitors in with its exotic dishes and the best view of the lovingly implemented family attraction. In the middle of the restaurant, artists once again impress with top class performances. Culinary delights, themed rides and shows merge to form an inimitable overall concept that is second to none.

Since the start of the season, there has been a preview centre in the queue area of the ‘Pirates in Batavia’ where visitors can immerse themselves in the story. The short film ‘Departure for Batavia’ is shown three times a day in the 4D Magic Cinema and visitors can follow the pirates through the Indonesian jungle in the ice arena. In addition, the first volume of the new novel series on the Adventure Club of Europe will be published in autumn by Coppenrath Verlag. The story of Batavia plays an important role in the first book.

Joe Kleimanhttp://wwww.themedreality.com
Raised in San Diego on theme parks, zoos, and IMAX films, InPark's Senior Correspondent Joe Kleiman would expand his childhood loves into two decades as a projectionist and theater director within the giant screen industry. In addition to his work in commercial and museum operations, Joe has volunteered his time to animal husbandry at leading facilities in California and Texas and has played a leading management role for a number of performing arts companies. Joe previously served as News Editor and has remained a contributing author to InPark Magazine since 2011. HIs writing has also appeared in Sound & Communications, LF Examiner, Jim Hill Media, The Planetarian, Behind the Thrills, and MiceChat His blog, ThemedReality.com takes an unconventional look at the attractions industry. Follow on twitter @ThemesRenewed Joe lives in Sacramento, California with his wife, dog, and a ghost.
Share
Facebook
Twitter
Linkedin
Email
Print
WhatsApp
Pinterest
ReddIt
Tumblr
Previous articleConsumer Electronics Show (CES) transitioning to fully digital event in January 2021
Next articleJeff Ramesar promoted to Director of Sales at Lighting Services Inc.