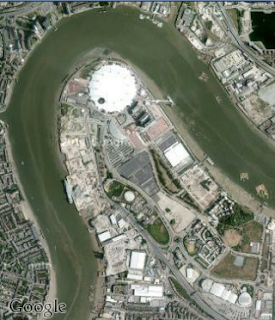 London, UK (February 23, 2012) /PRNewswire/ — After much speculation, it is today confirmed that the Peninsula Festival, London’s most exciting new culture, music and entertainment event has been granted planning permission by Greenwich Council for a temporary Beach to be built in the shadow of the world famous 02.

In time for the Olympics the ‘largest man-made’ beach in Europe will be built on an old industrial site on Greenwich Peninsula- a short walking distance from North Greenwich Tube and Bus Station. In May literally tons of sand will be ferried up the Thames from North Norfolk to the 4-acre site creating a unique leisure venue for up to 5000 visitors and local residents alike.

The Beach London will provide an excellent spot to chill and enjoy London with various sports facilities such as an Olympic size volleyball court, water fountains, a top class eatery and drinking establishments. The organisers plan a full programme of live entertainment, exhibition sports such as beach handball and beach rugby, fashion shows, top music acts and performances from international circuit DJs. The sandy beach will come with deck chairs, chill out beds and play areas for children.

Companies from around the world will be able to hire sections of the beach for a limited number of parties and corporate hospitality.

Mayor of London, Boris Johnson said: “I’m delighted that after a thousand years, London will soon have golden shores to rival even the best of the Caribbean. Greenwich Peninsula has already been transformed from an industrial hinterland into a vibrant commercial and entertainment hub , and the Beach will a magnificent addition to a fantastic series of spectaculars and events we are planning for visitors in the coming months. 2012 is a truly remarkable year for London in so many ways and we’re delighted to invite the world to sample our summer like no other . ”

Frank Dekker, spokesperson for Peninsula Festival commented, “The Beach is part of our legacy from the Olympic Games. We are really passionate about this part of London and believe that the site, with spectacular views over the Canary Wharf skyline and O2, will deliver huge benefits for Greenwich Peninsula and the wider area”.

Cabinet Member for Culture and Olympics at Greenwich John Fahy commented, “Royal Greenwich is already an amazing tourist destination within London and the addition of London’s only permanent Beach will only add to our tourist appeal. 2012 is an exciting year for Greenwich and we love the legacy of the Beach on Greenwich Peninsula”

The Beach is located on the North Western side of Greenwich Peninsula, less than 400m from North Greenwich Tube and bus station and kicks of to the public on 1st June 2012.

City beaches are becoming popular worldwide, with Paris (Paris Plages), New York and Berlin all openingyearly. The London Beach will open from June this year.

For further information and opening times people should go to: www.thebeachlondon.com

Joe Kleimanhttp://wwww.themedreality.com
Raised in San Diego on theme parks, zoos, and IMAX films, InPark's Senior Correspondent Joe Kleiman would expand his childhood loves into two decades as a projectionist and theater director within the giant screen industry. In addition to his work in commercial and museum operations, Joe has volunteered his time to animal husbandry at leading facilities in California and Texas and has played a leading management role for a number of performing arts companies. Joe previously served as News Editor and has remained a contributing author to InPark Magazine since 2011. HIs writing has also appeared in Sound & Communications, LF Examiner, Jim Hill Media, The Planetarian, Behind the Thrills, and MiceChat His blog, ThemedReality.com takes an unconventional look at the attractions industry. Follow on twitter @ThemesRenewed Joe lives in Sacramento, California with his wife, dog, and a ghost.
Share
Facebook
Twitter
Linkedin
Email
Print
WhatsApp
Pinterest
ReddIt
Tumblr
Previous article
IMAX Full 2011 Financials
Next article
Human Circuit Chosen as Media Integrator for Newseum’s Newest Gallery