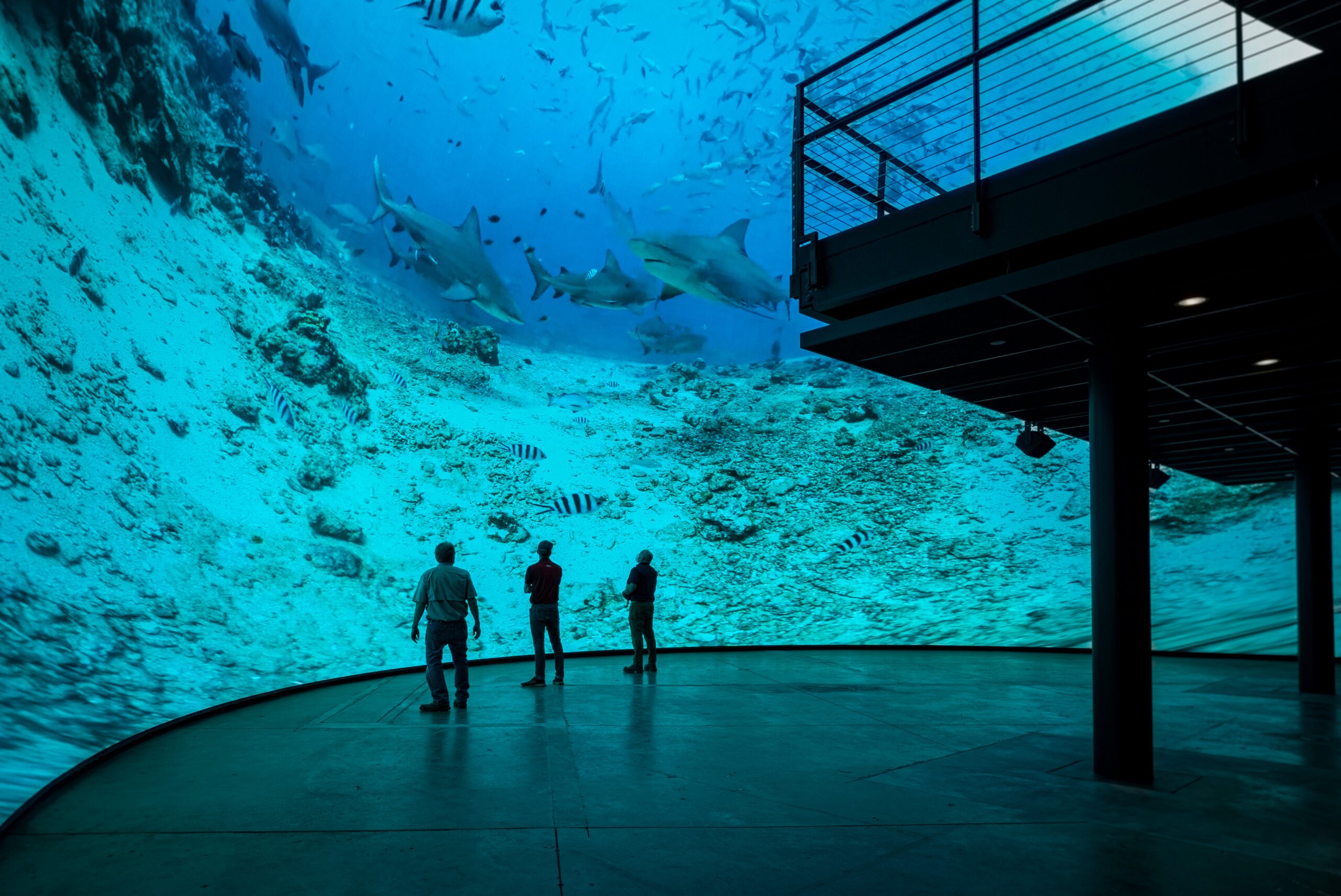 ABOVE: Cosm employees admire their work during an early test of the one of a kind DomeX LED display. All photos courtesy Cosm.

“Cosm is investing in growth to build out an incredible team, expand our capabilities, and leverage our market-leading technology in new ways with a focus on the emerging Experience Economy,” said Jeb Terry, Jr., President and Chief Executive Officer of Cosm, a global technology company that builds end-to-end solutions for immersive experiences.

Cosm announced on Jan 26, 2021, “The company emerges today after months of merger and acquisition (M&A) and research and development (R&D) activity.” The company provides a full stack experience solution including the physical design, engineering, and manufacturing; as well as the software, display engine, and content needs to deliver immersive experiences at scale. Additionally, Cosm unveils its Experience Center which houses a 20-meter diameter immersive 8K LED dome (DomeX) to be used in science, education, theme parks, attractions, sports and entertainment venues.

Cosm’s technological foundation is built on the capabilities of three core companies that continue to operate as individual brands, each of which contributes key components to the portfolio of technology and services offered. Acquired in 2020 via a take-private transaction and additional asset purchase, the Cosm Companies are:

“Great companies can only realize their full potential if they have wildly ambitious goals, a phenomenal team, and the ability to execute; and Cosm has them all,” said Stephen T. Winn, Cosm Board Chairman, and Chairman and Chief Executive Officer of RealPage.

“Each of these companies stands on its own with established legacies of innovation and world-class client partnerships; and when combined, unlock a much greater potential than previously imagined,” said Terry. “The Cosm Team is well positioned to expand and deliver on our robust backlog while also advancing innovation and ingenuity to develop future opportunities.

With over 2,000 experiences delivered and over 500 active installs, the combined companies are the market leader in the planetarium industry. In addition, the companies have also delivered signature experiences at prominent theme parks and attractions such as Universal, SeaWorld, and other well-known parks; counting some of the world’s most notable flying and dark rides as successful screen design and development projects.

Built upon historic “firsts,” E&S has a rich technology-driven legacy, having pioneered both the planetarium and immersive computer graphics fields, as well as developing one of the world’s first VR headsets in the 1960s nicknamed the “Sword of Damocles.”

LiveLike VR is a global leader in live immersive sports and entertainment production and distribution, and streaming architecture for partners around the world. Their production portfolio includes the world’s biggest events working with partners such as FOX Sports, FIFA, Telemundo, IPL, UEFA, Sky, BBC, FranceTV, and more. They empower rights holders and broadcasters to deliver immersive, interactive, and social experiences to consumers digitally via headsets (HMDs) and mobile platforms.

A Cosm employee admires the view of the newly constructed DomeX LED display. The free-standing truncated dome is 20-meter in diameter with an 8K resolution.

The company also announced the Cosm Experience Center. Located on the E&S campus in the University of Utah’s research park in Salt Lake City, the Center showcases an 8K immersive LED dome, also known as DomeX, the only one of its kind in the world. Completed in late 2020, the center demonstrates Cosm’s complete technology capabilities and presents the power of the possible to partners and clients. Visitors experience first-hand the capabilities and impact of the LED technology while also viewing the Spitz NanoSeam, market leader in projection screens. With the LED display, Cosm works to enhance and improve the viewer experience and overcome certain limitations of projection-based systems: shadows, resolution, contrast, reflections, brightness, and more. The Center also features the seventh iteration of the E&S core 3D rendering engine, Digistar, which was recently released in Q3 2020 to the Sciences and Education market. Digistar’s flexibility is also on display, showing off real-time rendered environments, live-streamed and recorded videos, and live content integrations with Unreal Engine and Unity.

Along with the existing leadership at Cosm’s portfolio companies, the expanded Cosm leadership team combines decades of experience in sports and entertainment, immersive and emerging technology, engineering and software development, and immersive content production and distribution.