Christie: Everything is under octrol 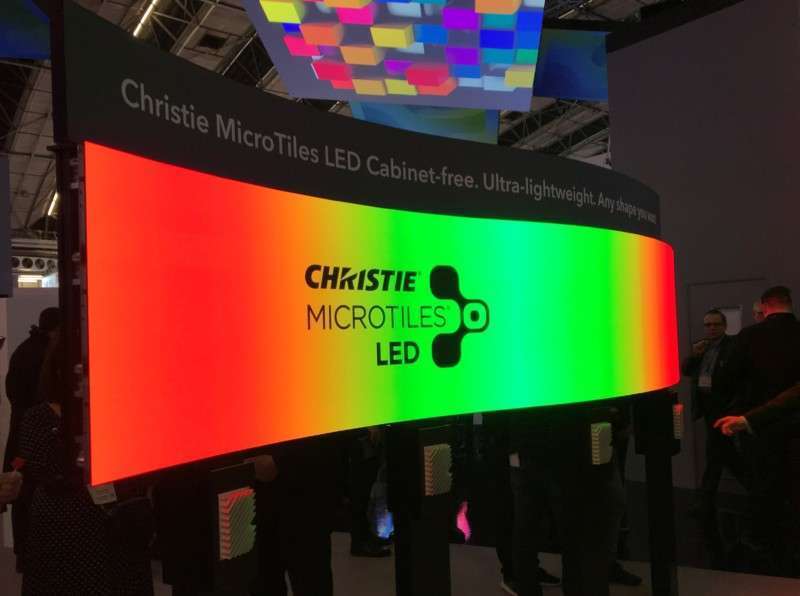 In the first half of 2019, new Christie® MicroTiles® LED have been enthusiastically received at trade events – including ISE, NAB and open houses across Europe and North America. At this writing MicroTiles LED were also heading for the AAM Museum Expo in New Orleans (to be displayed in the Ideum booth) and the InfoComm Show in Orlando, with plans for additional exhibits at theme park trade events later in the year. The product was recognized as best overall new product at ISE by rAVe Publications and is currently a finalist for an AV Technology Award as Display Product of the Year; orders are being taken now and mass production commences in September.

As modular, programmable, mountable digital display units, MicroTiles were a dramatic game changer technology when originally launched in 2009. MicroTiles inspired the re-imagining of digital displays by designers, architects and media producers, who explored their creative potential to reach audiences in world’s fair pavilions, museums, casinos, corporate spaces, retail, broadcast and more. Bob Rushby and Mike Perkins, co-inventors of the original MicroTiles, referred to them as “visual building blocks… pixels as a building material – making display elements an integral part of a space.”

Ten years later, MicroTiles LED are presented as delivering everything that made the first iteration a hit and more, with the vividness of LED display and various features and upgrades that expand the creative possibilities. New MicroTiles LED also have built-in features and compatibilities that support simpler installation, integration, maintenance and operations. They are more conducive to non-traditional shapes and configurations, and more eligible to use in visitor attractions.

For a deep dive into technical specs and other features of MicroTiles LED, visit microtiles.com

“There’s a reason they’re called ‘MicroTiles,’ said Martin Waverley. “They are very small, 9 inches by about 10.5 inches, significantly smaller (about ¼ the size) than the competition. The beauty of that is the ability to create more interesting shapes, tighter radiuses. They can wrap around corners (with a 5mm edge gap); they can do tight-radius concave or convex curves.. They can wrap the inside and the outside of a surface.”

The ability to assume multiple form factors and deliver highend media suggests many creative possibilities for MicroTiles LED in themed entertainment, rides, museums, cruise ships, hospitality and more. Bryan Boehme said, “This technology is excellent for providing something quick and dramatic – also for futuristic displays and sets, and details such as control panels for space ships. In queue lines and preshow spaces, a MicroTiles LED display can help hold people’s attention and show them something interesting before they enter the main attraction. It can
also provide a powerful Pepper’s Ghost effect; we think it will be immediately applied, for instance in dark rides or other attractions where guests get up close to the image.”

In addition to their ability to form inside and outside corners and angles, their ability to form shapes and curves, convex or concave, without detectable seams or shadows, suggests many possibilities. “You can overlap tiles, you can stack them – it’s almost unlimited,” said Boehme. “You can put content on every surface; any structure can be a media surface. They’re competitive with compound curved screens.”

Media and canvas become one

What kind of media can you put on MicroTiles LED for visitor attractions? According to Christie’s experts, just what you might need.

The picture becomes quite holistic – all the features and factors are interdependent. “We’re all about providing a complete system that delivers an experience: manageability, serviceability, interface to the wall, how you interact with it, and more,” said Romanowitz.

Romanowitz continued, “MicroTiles LED are what theme park customers want and need for dark rides in terms of visual performance, supporting full motion video, broad color spectrum and broad viewing angle sans latency and artifacts.” He touts “P3 color space with 97% uniformity, up to 12 bit content, 4:4:4 chroma subsampling, 4K input capacity and refresh rate of 120Hz. And whatever you put in our control system goes directly to the pixel, uncompressed. There is a 40 gigabit connection between the controller and the wall.”

Martin Waverley said, “Media producers have been enthralled to see the color that can be delivered by MicroTiles LED: as good as or better than cinema P3 DCI color today. The high refresh rate of 120Hz allows you to pan the camera very quickly without losing clarity or crispness. That is complemented by the P3 color space and 12 bit color depth to give producers many options and great freedom to create content that will play back just as desired.”

Boehme said, “The expanded color space plus the ability to shape the canvas itself is a powerful creative combination, and producers can rely on built-in upscaling and downscaling (16x and 20x, respectively) to support unusual configurations. Before, if you wanted 1080p the wall had to get that exact size in pixels. Now, if you send us a weird shape we can help you scale it without having to add a new processor.”

“The possibilities go well beyond the physicality of creating shapes,” said Romanowitz. “Producers will be pleased to know that MicroTiles LED have built-in compatibility with the Christie family of support products, such as Pandoras Box, Terra SDVoE AV-over-IP networking solutions and Christie Spyder X80. With those combined resources you can create a dimensional canvas, map the content, share any content anywhere, and make an amazing, dramatic experience.”

Waverley emphasized that MicroTiles LED work with gesture interactive systems. “The system can be configured to work with all the interactive stuff out there such as facial recognition, and this has really resonated with our partners in theme parks, museums, and public exhibitions.”
Boehme pointed out that using MicroTiles LED doesn’t require creating new content, and that existing content can be repurposed quite effectively given the wide range of display options and built-in tools. “With Christie Terra you can take any source, any camera or format, and distribute it over the network, bringing it into the MicroTiles LED controller. There’s broad compatibility.”

A primary upgrade that MicroTiles LED boast is the proprietary, “click and go” quick mount system. “It has cut the install time in half, which also represents a cost saving,” said Romanowitz. “And as they say in the movie industry, ‘that lets you put more of your money on the screen.”

Waverley drew a different cinematic parallel. “It’s like the movie ‘Armageddon,’ when Bruce Willis goes in the spaceship and starts throwing out unnecessary technology. A metal sheet goes on the wall and auto aligns; the chassis magnetizes to the sheet. There are no cables, just one Cat5 to each tile, and that includes power. The normal lead time now is about 10 weeks for the LED tiles and electronic components; the sheet and chassis can be provided in advance, 4-6 weeks out.”

Romanowitz invoked “perfect planarity” facilitated by precision manufacturing: “Once you get the mounting structure on the wall, no x y or z adjustment is needed. The wall adjusters have 20mm of adjustability and the direct mount system will work in any fixed installation.” The thinness of the mount keeps the total installation depth within the four-inch allowance required for ADA compliance.

“In addition to the simplicity and speed of installation, the system can be managed remotely, and doesn’t require a dedicated console, which supports themed entertainment applications,” said Boehme. “Control is via HTML5 based browser, meaning that you can run it and receive alerts on your device from anywhere on the property or in the world. This supports minimal downtime and is one of the features that provide redundancy.”

The ability to locate support equipment at some distance from the display is another boon for visitor attractions. “You can remote the power up to 100 meters away,” said Waverley. “You can remote the video signals, with integrated fiber extenders, and you can locate the LED controllers up to six miles away. You can have your own cloud. All this supports a smaller footprint for the actual attraction and keeps the actual maintenance away from the ride building.”

Enter the “octroller,” a key component. Said Waverley: “Given that your power can be remoted, instead of all receivers and power supply with the display, you put in place the octroller, so named because one octroller feeds 8 tiles (24 modules). You have to get electrical involved with the installation, but by doing so, you are keeping all that equipment heat out of the room, and the power supplies are redundant, telecom grade and hot swappable, which supports 24/7 uptime.”

MicroTiles LED have something like a group consciousness. “From time to time LEDs go bad,” said Romanowitz. “With Christie’s patented system you can remove any module board from anywhere on the wall and replace it, and the new module will match to the rest once initialized into the system.” A related feature supporting uniformity is auto-calibration. Over time, variations can happen in color and brightness. “They are cameracalibrated in the manufacturing process, but once installed, they can auto-calibrate themselves without a camera,” said Romanowitz.

“The system uses built-in sensors to monitor itself constantly, so that each piece knows what the other one is doing, knows every setting,” said Waverley. “Because the tiles talk to each other, if you have multiple attractions using the tiles, you can swap them out one to the other, and even put your spares to work as a wall.”

“They learn from each other,” said Boehme.

The field is more crowded with AV solutions today than it was a decade ago. Christie sees one of the important differentiators for MicroTiles LED and other proprietary product lines is that they are manufactured by Christie, for Christie, under Christie control in its Kitchener, Ontario location.

Another key, general point is partnership with clients and the industry. “We listen to our customers and incorporate what we learn in the design and engineering of our product,” said Boehme. “With Christie MicroTiles LED, we’ve given them a digital canvas they can use in a multitude of ways with fewer constraints than ever before, to share messages and create great guest experiences. We are very excited to see the creative output and unexpected, pioneering concepts and projects that will emerge.” • • •

Judith Rubin
Judith Rubin ([email protected]) is a leading journalist, publicist, strategist, blogger, content marketing specialist and connector in the international attractions industry. She excels at writing about all aspects of design and technical design, production and project management. Areas of special interest include AV integration and show control, lighting design and acoustics, specialty cinema, digital video and world’s fairs. Judith has ties to numerous industry organizations. From 2005-2020 she ran communications, publications and social media for the Themed Entertainment Association (TEA). In 2013, she was honored with the TEA Service Award. She was development director of IMERSA, and co-chair of the 2014 IMERSA Summit. She was publicist for the Large Format Cinema Association in the 1990s, now part of the Giant Screen Cinema Association (GSCA) and has also contributed to the publications of PLASA, IAAPA and the International Planetarium Society. Already making her mark as a magazine and book editor, Judith joined World’s Fair magazine in 1987, which introduced her to the attractions industry. Launching as a freelancer in the mid 1990s she has contributed to dozens of publications and media outlets including Funworld, Lighting&Sound America, Sound & Communications, Urban Land, The Raconteur and The Planetarian. She joined InPark in 2010. Judith earned a Bachelor of Fine Arts from Pratt Institute. She has lived in New York City and the San Francisco Bay Area, and now makes her home in Saint Louis, where she is active in the local arts and theater community.
Share
Facebook
Twitter
Linkedin
Email
Print
WhatsApp
Pinterest
ReddIt
Tumblr
Previous articleJoe Fox joins EXP
Next articleThe Producers Group: “Wherever it takes us”