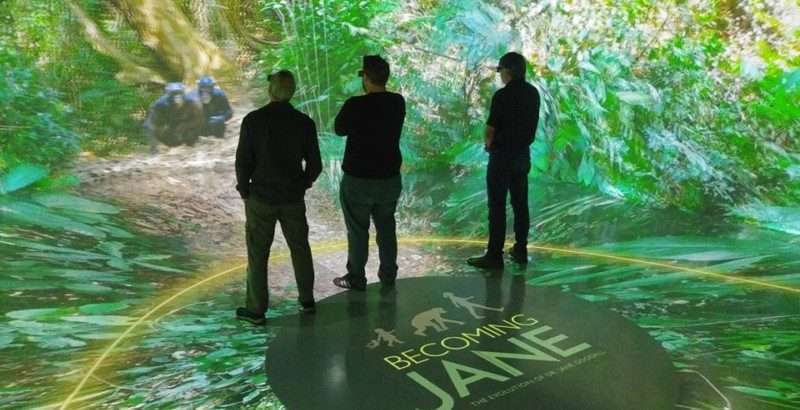 Falcon’s Creative Group has announced that with its latest collaboration with the National Geographic Museum in Washington, D.C., it has provided six multimedia experiences for the new “Becoming Jane” exhibition. This exhibition could not have been produced without the support of the Jane Goodall Institute as well. Visitors become immersed in Jane Goodall’s remarkable story of becoming the first person to live among and study wild chimpanzees, humankind’s closest living relatives.

A variety of storytelling techniques and new technology are showcased throughout the exhibition. An introductory film that is part CG, part historical footage, shares Jane’s personal journey, beginning with her childhood desire for adventure and eventually revealing how she made it to Gombe Stream National Park, the enchanting but danger-filled jungle in Tanzania where she pioneered methods for studying animals in their natural habitat and discovered many surprising behaviors that changed the way the world viewed not only chimpanzees, but humans as well.

A 3D 10K theater experience offers a unique opportunity to truly feel what it was like to be Jane as she trekked through the forest searching for the elusive chimpanzees. The film superimposes CG chimps into footage of Gombe Stream National Park that was shot with a virtual reality 360° 3D camera. The floor and walls serve as additional projection surfaces, further drawing the guest into Jane’s narrative. Gombe’s natural sounds, produced in 7.1 surround sound, round out the authentic environment.

Another portion of the exhibition features a hologram of Jane, standing under twinkling starlight, sharing her most memorable recollections. Jane’s image is projected onto a custom, life-size mold to make it appear as if she is just a few steps away, enhancing the intimacy of the experience. In one of two interactive experiences, guests can learn to talk like a chimpanzee, mimicking their common vocalizations to elicit a positive or negative reaction from a CG chimp.

For the other interactive experience, Falcon’s Creative Group is unveiling Falcon’s Vision™, an augmented reality solution that empowers guests to interact and engage with a physical space in unexpected ways. Becoming Jane visitors will be the first members of the public to use this custom, revolutionary device. They will use a Falcon’s Vision™ headset as binoculars, locking their focus on a target to trigger important findings from Jane’s groundbreaking research. The experience’s animations are accompanied by the voice of Bill Wallauer, a filmmaker with the Jane Goodall Institute who spent many years in Gombe Stream National Park recording the daily behavior of chimpanzees.

The exhibition closes with videos of Jane sharing powerful messages of hope and asking for individuals to pledge to make a positive impact in their world.

“Our mission with this legacy exhibition is to celebrate the extraordinary life and work of Jane Goodall, exploring her early years, her fascinating studies in Gombe, and her current environmental advocacy. With Falcon’s Creative Group, we have created engaging multimedia and interactive, hands-on experiences that will enhance the storytelling. Jane used unorthodox approaches to study chimpanzees, yielding extraordinary results. In a way, we’ve done the same thing with this exhibition,” says Alan Parente, Vice President of Creative at National Geographic.

“The entire team at Falcon’s is honored to partner with National Geographic and the Jane Goodall Institute to bring Jane’s historic, significant, and impactful discoveries to brilliant life. Our creative intent is to invoke feelings of actually traveling with Jane in Gombe Stream National Park as she made history. Though several exciting forms of technology are used, the focus is on immersing visitors in Jane’s personal experiences and leaving them with a deeper appreciation and understanding of chimpanzees and their relationship to humans,” says Jason Ambler, Vice President and Executive Producer of Falcon’s Digital Media.

Joe Kleimanhttp://wwww.themedreality.com
Raised in San Diego on theme parks, zoos, and IMAX films, InPark's Senior Correspondent Joe Kleiman would expand his childhood loves into two decades as a projectionist and theater director within the giant screen industry. In addition to his work in commercial and museum operations, Joe has volunteered his time to animal husbandry at leading facilities in California and Texas and has played a leading management role for a number of performing arts companies. Joe previously served as News Editor and has remained a contributing author to InPark Magazine since 2011. HIs writing has also appeared in Sound & Communications, LF Examiner, Jim Hill Media, The Planetarian, Behind the Thrills, and MiceChat His blog, ThemedReality.com takes an unconventional look at the attractions industry. Follow on twitter @ThemesRenewed Joe lives in Sacramento, California with his wife, dog, and a ghost.
Share
Facebook
Twitter
Linkedin
Email
Print
WhatsApp
Pinterest
ReddIt
Tumblr
Previous articleThe greatest show: InPark explores IAAPA Expo 2019
Next articlePanasonic and Disney partner on blockbuster Star Wars: Rise of the Resistance attractions