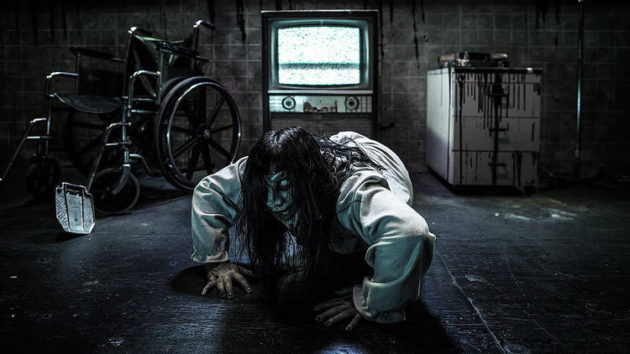 Guests receive timed tickets and enter the venue, which is themed as the Meadowbrook Institute (ominous research facility) for their “appointments.” During the preshow, a video provides the backstory of Katie, a patient about to be transferred from the Institute because her supernatural, telekinetic abilities are more than the staff can handle. Then the alarm is raised: Katie has gone missing!

Entering the showroom for the main experience, eight people at a time are loaded into 4D-effects seats disguised as wheelchairs. Once seated, they are provided with Samsung Gear VR, powered by Oculus headsets, headphones and a panic button. A safety message is displayed while each guest’s hands are strapped down to the wheelchair, and the terrifying, four-minute VR adventure begins. Through the VR goggles, each guest sees a 360 degree, first-person POV scenario as if they were an injured patient in a care facility with things going haywire all around.

Without giving it all away, what are some of the scary things that happen in FEARVR?

David Love: There’s one moment where you feel yourself getting an injection – which I imagine may never have happened before in a 4D experience. There’s a lot of mayhem and blood and some startling sound effects.You’re a helpless patient in this Institute where things are spiraling out of control in gruesome ways…

Where did you do the live action shoot?

We used a studio that serendipitously is very near Knott’s Berry Farm and had a hospital set already in place, built out for 360-degrees. All that had to be done was black out the ceiling. It worked out perfectly for our needs. I have shot at many different hospitals in the course of my career – there are quite a few older facilities out there that are used just for film sets – but this worked out great.

Who was your cinematographer and what gear was used to shoot?

We used a seasoned 360 cinematographer, Nick Lantz, and his GoPro rig. He had the gear, and knew how to use it – allowing me to focus on producing and Ted Dougherty to focus on directing.

The film set was available to us for three days. We spent one day on prep and two days filming, followed by about six weeks on post production in-house at Hollow Studios.

How do you pace the action of a VR horror experience?

There needs to be something happening on screen constantly. It is designed to lull the viewer into a false sense of security which gets interrupted – over and over again. It is a constant build all the way to the end. It’s very similar to doing a ridefilm, in length and pacing, and in being designed around a passive protagonist – of course, VR can be interactive but in this case the passive experience helps maximize throughput. I think that Ted Dougherty’s background in the Halloween theme park industry, Jon Cooke’s experience at Knott’s Scary Farm and my own background in film production all really helped during the writing process for the pacing of the VR horror experience.

What were some special challenges in producing media for VR format?

It helped that we have considerable past experience with narrative projects and media-based attractions. We look to the story to help prepare us to approach the filming.

That said, we had to look at it in a much different way from traditional media because in VR it’s all first-person POV. The camera is now the audience. The person in the wheelchair is the guest – the protagonist, transported into the virtual environment which in this case is the institute scenario. All characters are speaking directly to them and looking at them. We had to visualize the project in 360 degrees and write in that context.

In shooting, there are some special restrictions. You have to build a special set to conceal the photographer. None of the crew can be on set during shooting – they have to be hidden around corners or behind a wall. We were always behind a wall looking on monitors via webcam to make sure the action was right, the line was correct. And we couldn’t play it back right after filming because the footage from the seven cameras has to go through a stitching and blending process. So we had to shoot three or four takes to make sure we’d get what we needed.

We did find a way to be on set during the shoot. In one instance, the director, Ted Dougherty actually dressed as a character in the show, which put him on the set during a particular scene.  While Ted was directing specific elements of that sequence, I co-directed other elements going on at the same time behind and away from Ted. We had a lot more choreography and timing with the actors than we typically use in other productions.

Tell us about your ridefilm work.

Hollow Studios was previously Hollow 4D Studios, and we launched in 2008 with an emphasis on ridefilms. Our first, “The Tomb,” was launched at the IAAPA Attractions Expo in Orlando. It was housed in a mobile trailer with a full Egyptian theme built around it. We won the IAAPA award for best exhibit that year, in our size category. Between then and now we produced a total of six ridefilms that have been licensed to various clients including SimEx-Iwerks, Dave & Busters and Ripley’s.The library is still available in formats that work for all motion theaters.

Does 360 VR production have similarities to producing a show for a digital planetarium or giant screen dome?

Yes – a 360 dome or 360 cinema would be the giant screen equivalent, and the techniques are very similar.

Have you done work with Knott’s in the past?

Ted and I produced a documentary for Knott’s Berry Farm back in 2002 named “Season of Screams,” about the history of Knott’s Scary Farm. Ted also wrote the book about Knott’s Scary Farm named “Knott’s Halloween Haunt – A Picture History.”

How did your production team interface with the internal team at Cedar Fair and Knott’s?

We worked closely with Cedar Fair’s Christian Dieckmann and Brent Barr, who were the executive producers. The conversation had begun early with Jon Cooke, Knott’s Art Director and one of the park’s Halloween designers. Jon came up with the overall design for the experience. The initial plan was just to do it for Knott’s but then Christian took an interest, and it expanded to two additional parks. We had bi-weekly phone calls with Christian and Brent and other executives throughout the process. They are great people to work with –they’re very open-minded, listen to ideas, ask questions. This was very much a team effort and for us, Cedar Fair is a dream client.

On the production side, the Knott’s in-house team was amazing. Jon Cooke and Ted Dougherty did the casting. Knott’s has a superbly talented and professional in-house crew to work with. They built the 4D seats in-house and were our crew for the live action filming – from set dressing to hair and makeup and lighting. It’s like they have been doing film work all their lives. Post production was done in-house at Hollow Studios by me and Ted Dougherty. We both worked closely throughout the process with Jon Cooke.

The Knott’s team is equally adept when it comes to technology and integration. They synchronized the phones to all play back at the same time, at the push of a button on the in-house show control player.

How does the show work with the VR playback devices?

The Samsung Gear VR wireless headset powered by Oculus was found to be the best choice for the head-mounted display. It has a built-in app that plays back 360 video flawlessly, and that helped simplify the process – it was preferable to going through a game engine program. Once the content is output in its particular format, it is loaded directly onto the phone, and the Gear VR app recognizes it.

What do you think about the future of VR?

VR is here to stay. It’s another great platform for media and it has applications to many industries including entertainment. It is another way to create a compelling experience and tell a story. It lends itself to the new wave of ridefilms in that it can be synced to motion seats just like a traditional ridefilm but brings the guest in much closer to the action than a traditional flat movie screen.

Joe Kleimanhttp://wwww.themedreality.com
Raised in San Diego on theme parks, zoos, and IMAX films, InPark's Senior Correspondent Joe Kleiman would expand his childhood loves into two decades as a projectionist and theater director within the giant screen industry. In addition to his work in commercial and museum operations, Joe has volunteered his time to animal husbandry at leading facilities in California and Texas and has played a leading management role for a number of performing arts companies. Joe previously served as News Editor and has remained a contributing author to InPark Magazine since 2011. HIs writing has also appeared in Sound & Communications, LF Examiner, Jim Hill Media, The Planetarian, Behind the Thrills, and MiceChat His blog, ThemedReality.com takes an unconventional look at the attractions industry. Follow on twitter @ThemesRenewed Joe lives in Sacramento, California with his wife, dog, and a ghost.
Share
Facebook
Twitter
Linkedin
Email
Print
WhatsApp
Pinterest
ReddIt
Tumblr
Previous articleDynamic Attractions Secures $21 Million Contract for Ride System in Asia
Next articleAudubon Nature Institute Teams With New Orleans Pelicans on Children’s Book to Promote Wildlife Conservation