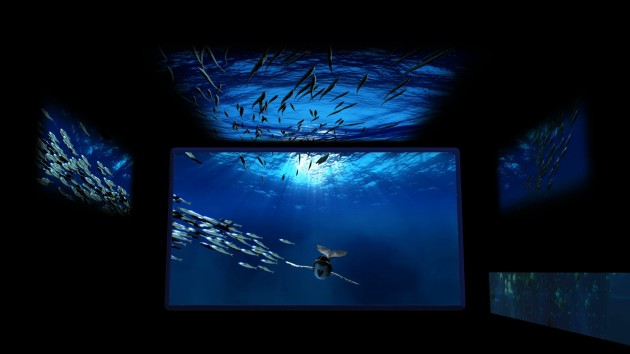 Geneva, Switzerland (March 23, 2016) — Filmmaster Events, with the artistic direction of Alfredo Accatino, developed the renovation process of Genoa Aquarium, the biggest In Europe, creating a format based on experiencing and entertainment.

The agency, which will be working on Rio 2016 Olympic Ceremonies, developed the concept, called “The aquarium is a ship travelling through the world seas”, and the contents. The result is an enchanting experience focused on edutainment.

Filmmaster Events created new interactive installations, reorganized the sound & light design and the scenography and re-named the tanks. It was a great challenge for one of the most important aquariums of the world, which reinvented itself to become one of the top destinations of next summer.

The aquarium underwent several changes. In the Sala Blu, the first room seen by visitors, Filmmaster Events installed a spectacular video mapping showing the entire itinerary using a captivating storytelling. Other installations will be present at the Eels tank, the Penguins Area and the Jellyfish tank.

The hi-tech part of the aquarium will be upgraded with interactive stations, especially developed for the aquarium. Filmmaster Events developed the creativity of the new App which will be launched during the anniversary celebrations.

This project strengthens Filmmaster Events’ leadership in the industry of entertainment and of the creation of artistic, scientific and cultural contents. It also underlines the high diversification of its activities.

Joe Kleimanhttp://wwww.themedreality.com
Raised in San Diego on theme parks, zoos, and IMAX films, InPark's Senior Correspondent Joe Kleiman would expand his childhood loves into two decades as a projectionist and theater director within the giant screen industry. In addition to his work in commercial and museum operations, Joe has volunteered his time to animal husbandry at leading facilities in California and Texas and has played a leading management role for a number of performing arts companies. Joe previously served as News Editor and has remained a contributing author to InPark Magazine since 2011. HIs writing has also appeared in Sound & Communications, LF Examiner, Jim Hill Media, The Planetarian, Behind the Thrills, and MiceChat His blog, ThemedReality.com takes an unconventional look at the attractions industry. Follow on twitter @ThemesRenewed Joe lives in Sacramento, California with his wife, dog, and a ghost.
Share
Facebook
Twitter
Linkedin
Email
Print
WhatsApp
Pinterest
ReddIt
Tumblr
Previous articleADG Mountain Coaster to be Key Component of Branson Mountain Adventure Park
Next articleThoroughly Modern Museums