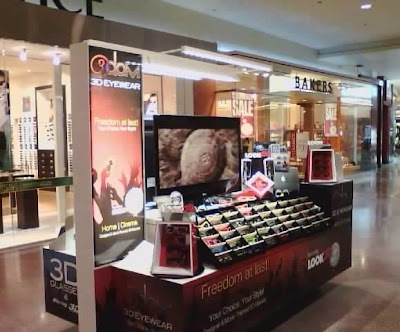 3Dom 3D Eyewear are working with Look3D Eyewear in a retail push that will position themselves as a leader in the 3D Eyewear Retail space.

Look3D Eyewear is a world leader in the 3D eyewear market, being the first company to have its 3D eyewear RealD Certified, and since have produced collectors 3D glasses for many major movie releases such as Harry Potter, Cars 2, Star Wars 3D and the latest glasses for the Katy Perry: Part Of Me 3D release

Along with these themed frames, 3Dom have released Look3D’s 2012 Designer 3D Collection and will also have an Oakley 3D frame and Gunnar Optiks 3D glasses available.

With 3D being a focus to most of the film studios and many of the consumer electronic companies pushing the 3D home entertainment market the company hopes to add additional stores in the near future.

Joe Kleimanhttp://wwww.themedreality.com
Raised in San Diego on theme parks, zoos, and IMAX films, InPark's Senior Correspondent Joe Kleiman would expand his childhood loves into two decades as a projectionist and theater director within the giant screen industry. In addition to his work in commercial and museum operations, Joe has volunteered his time to animal husbandry at leading facilities in California and Texas and has played a leading management role for a number of performing arts companies. Joe previously served as News Editor and has remained a contributing author to InPark Magazine since 2011. HIs writing has also appeared in Sound & Communications, LF Examiner, Jim Hill Media, The Planetarian, Behind the Thrills, and MiceChat His blog, ThemedReality.com takes an unconventional look at the attractions industry. Follow on twitter @ThemesRenewed Joe lives in Sacramento, California with his wife, dog, and a ghost.
Share
Facebook
Twitter
Linkedin
Email
Print
WhatsApp
Pinterest
ReddIt
Tumblr
Previous articleVIDEO: Freshwater Oasis, Discovery Cove, Orlando, FL, USA
Next articleMediaMation Sets Sail at South Korea’s National Maritime Museum