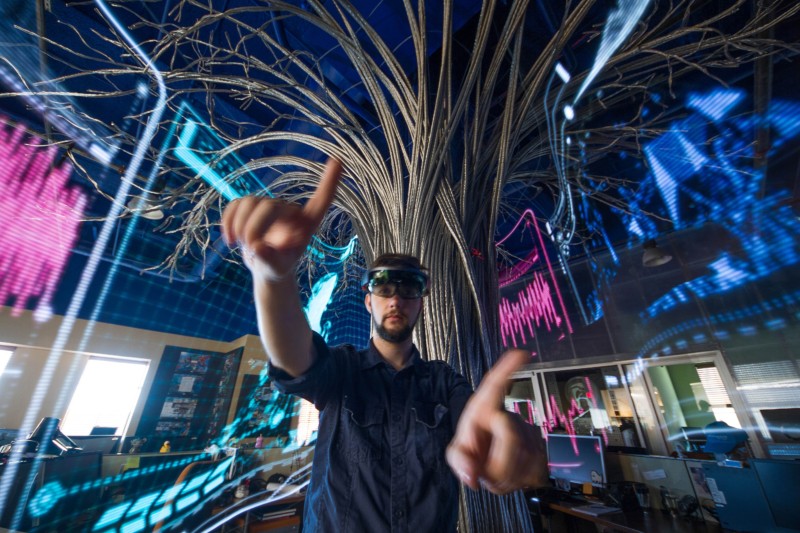 Falcon’s Creative has been hard at work developing alternate reality technologies and experiences, including VR and AR.  InPark’s Joe Kleiman tried out the latest incarnation of the company’s Augmented Reality headset and spoke with Saham Ali, Falcon’s Director of Technology, at their booth during the 2016 IAAPA Attractions Expo.

WHAT ADVANTAGES DOES AUGMENTED REALITY HAVE OVER VIRTUAL REALITY?

With AR, you have an additive feature that is an extension of the real world.  It can be used to enhance existing experiences in a much different way from VR.  When you put on an AR headset,  you can still see others, but you also see additive content over the real world.

WHAT APPLICATIONS IS FALCON’S EXPLORING WITH AR?

AR is great because we could add it to an existing attraction or design one from scratch.  One concept we’ve come up with is a scavenger hunt through a park, with markers provided in the AR headset. We’re also very interested in smart spaces, where information overlays appear in an environment.  Imagine looking at a mural and as you glance over it, information pops up before your eyes explaining the different parts of the mural. We could make it as detailed as we want.

WHAT ARE SOME OF THE CHALLENGES YOU’VE ENCOUNTERED?

Our goal is to try and be photorealistic in a real time application, but that affects battery life.  The more realistic the image, the shorter the battery life.  We’re also looking at tethering vs wireless for conveying data, but ultimately the requirements will be determined by the clients’ needs.

I NOTICED THAT WHEN WEARING THE HEADSET, THE IMAGE APPEARS IN A REDUCED WINDOW.  IS THAT A RESULT OF TECHNOLOGICAL LIMITATIONS?

Our system is based on Microsoft HoloLens, so we’re limited to its current parameters, but that will change over time.

TRYING OUT THE HEADSET, I WAS ABLE TO WALK AROUND AR DINOSAURS AND SEE 3D MODELS OF YOUR RIDE SYSTEMS,  BUT I THINK THE MOST IMPRESSIVE THING I EXPERIENCED WAS THE RIDE VEHICLE AT THE ADJACENT OCEANEERING BOOTH.  AS THE VEHICLE MOVED, THE LIFE SIZE AUGMENTED REALITY PASSENGERS, NOT VISIBLE WITHOUT THE HEADSET, MOVED WITH IT.  IS THIS A SAMPLE OF WHERE RIDES ARE HEADED?

Joe Kleimanhttp://wwww.themedreality.com
Raised in San Diego on theme parks, zoos, and IMAX films, InPark's Senior Correspondent Joe Kleiman would expand his childhood loves into two decades as a projectionist and theater director within the giant screen industry. In addition to his work in commercial and museum operations, Joe has volunteered his time to animal husbandry at leading facilities in California and Texas and has played a leading management role for a number of performing arts companies. Joe previously served as News Editor and has remained a contributing author to InPark Magazine since 2011. HIs writing has also appeared in Sound & Communications, LF Examiner, Jim Hill Media, The Planetarian, Behind the Thrills, and MiceChat His blog, ThemedReality.com takes an unconventional look at the attractions industry. Follow on twitter @ThemesRenewed Joe lives in Sacramento, California with his wife, dog, and a ghost.
Share
Facebook
Twitter
Linkedin
Email
Print
WhatsApp
Pinterest
ReddIt
Tumblr
Previous article
SeaWorld San Antonio Expands Partnership With Texas Marine Mammal Stranding Network
Next article
InPark’s Top Ten Stories from 2016 – #2

ValoArena arrives in the United States