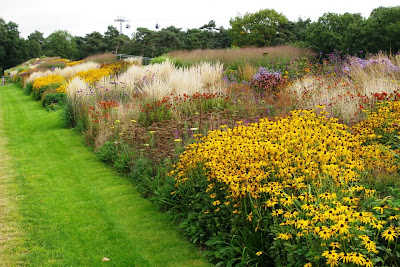 Aalsmeer, The Netherlands — The Dutch city of Almere has been chosen to host Floriade 2022.  The Netherlands Horticulture Council has determined that Almere has a very good and well developed plan that was submitted under the name “Green Growing Cities,” a combination of land and water and of city and countryside. The plan has a solid financial foundation with relatively little risk.

The design of Almere will be realized in the weather and water, a pond on the one side adjacent to the center on the other side to the A6 motorway. The plan is compact and stems from the planned development of Almere based prominently on the Green City philosophy. This is a theme that fits the innovative power of horticulture and a concept that is seen as a development path for all cities worldwide. Almere is part of the Amsterdam Metropolitan Area and benefits from the metropolitan atmosphere of the city of Amsterdam.

The Floriade will be a district in Almere, which will remain as a natural, recreational and cultural park, where small and large scale events will take place. The Floriade is an investment in the future of the city of Almere, both for its residents and businesses. For international visitors, the Floriade in Almere will join the city’s unique location at seabed level as a unique selling point, illustrating the combination of water with urban development, infrastructure and green. This provides additional opportunities for the Netherlands and the Floriade gives it an extra dimension.

The plan for the Floriade in Almere will be organized with the full support of Almere, and also that of other municipalities in Flevoland province, research institutions, governments and industry.

Floriades have received international recognition from the Bureau International des Expositions (BIE) and the International Association of Horticultural Producers (AIPH).

Joe Kleimanhttp://wwww.themedreality.com
Raised in San Diego on theme parks, zoos, and IMAX films, InPark's Senior Correspondent Joe Kleiman would expand his childhood loves into two decades as a projectionist and theater director within the giant screen industry. In addition to his work in commercial and museum operations, Joe has volunteered his time to animal husbandry at leading facilities in California and Texas and has played a leading management role for a number of performing arts companies. Joe previously served as News Editor and has remained a contributing author to InPark Magazine since 2011. HIs writing has also appeared in Sound & Communications, LF Examiner, Jim Hill Media, The Planetarian, Behind the Thrills, and MiceChat His blog, ThemedReality.com takes an unconventional look at the attractions industry. Follow on twitter @ThemesRenewed Joe lives in Sacramento, California with his wife, dog, and a ghost.
Share
Facebook
Twitter
Linkedin
Email
Print
WhatsApp
Pinterest
ReddIt
Tumblr
Previous articleSeaWorld Orlando Launches Multi-Year Marketing Campaign With Miami Dolphins NFL Team
Next articleMammoth Sound & Vision Welcomes New York Visitors to SHI’s Cloud