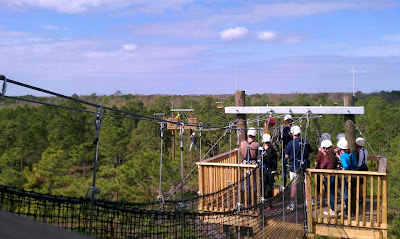 Orlando, FL, USA — Florida EcoSafaris at Forever Florida is introducing an entirely new category of theme park to Orlando visitors, the EcoPark. Launching April 6, 2012, the new EcoPark Admission Ticket at the Central Florida ecotourism attraction will allow for a full day of adventures. The single admission will gain visitors access to six different adventures including the all new Zipline Safari, Cypress Canopy Cycle and four brand new adventures also opening on April 6, 2012. The EcoPark opening will mark the completion of a year-long, $1.5 million reinvention of the attraction located at the 4700 acre Forever Florida Wildlife Conservation Area.

Most notable among the four new adventures is The Rattlesnake, the first zipline roller coaster in the USA. This cutting edge new experience represents the next generation of ziplining. Riders launch from a height of 65 feet, gliding along a rigid rail system that winds through the treetops of the Pine Flatwoods. The ride takes visitors screaming through the trees, swinging, swooping, jumping and dipping through 1000 feet of thrilling adventure.

Also opening is Peregrine Plunge, the longest single straightaway zipline in Florida. Measuring in at 1300 feet in length, this adventure has “breathtaking thrills and views.” Shooting out over the conservation lands, riders will feel “just like a native Peregrine Falcon diving into the distance after its prey.” With two sets of lines side by side, you’ll be competing against another rider as you race toward your landing point. The adventure allows a clear line of sight looking out ten miles over pristinely kept Florida conservation lands.

Rounding out the four new adventures are Panther Pounce and the Swooping Crane. Panther Pounce is a 68 foot high challenge tower that beckons guests to step off into a safely controlled rapid descent to the ground below. The Swooping crane is an extreme swing where guests release from a height of 55 feet into a freefall before swooping back and forth between the trees and over the brush.

The new EcoPark Admission Ticket also includes the all new Zipline Safari which opened in September of last year. As the biggest zipline adventure in Central Florida, the two and a half hour guided journey through the treetops of the conservation lands includes seven different ziplines, three sky bridges and ten connecting observation platforms. Rounding out the day is the relaxing Cypress Canopy Cycle which debuted in July of last year as another first of its kind ride in the USA. Adventurers gently pedal their way through the treetops while suspended twenty five feet over forested wetlands.

“This is a truly first of its kind collection of adventures in the USA”, said Ken Wilshire, General Manager of Florida EcoSafaris at Forever Florida. “We’ve created what amounts to an ecotourism adventure theme park as our way to provide the thrilling experiences that Orlando vacationers are seeking. Where we’re different is that we use these adventures as a way to help visitors build lasting connections with the conservation lands, hopefully inspiring them to join in the effort to save Florida’s rapidly disappearing wild areas.” Florida EcoSafaris at Forever Florida donates 30 percent of all revenues to the non-profit Allen Broussard Conservancy. The funds help to permanently preserve and protect additional lands at the Forever Florida Wildlife Conservation Area, recognized as a biological hotspot hosting one of the highest concentrations of endangered and highly threatened species in the state.

ABOUT FLORIDA ECOSAFARIS AT FOREVER FLORIDA
Florida EcoSafaris at Forever Florida: Florida EcoSafaris at Forever Florida is a unique ecotourism attraction located in St. Cloud, Florida; just one hour southeast of Orlando. Departing from a picturesque Florida cattle and horse ranch, guests journey deep into the 4700 acre Forever Florida Wildlife Conservation Area. This very special place encompasses 12 distinct ecosystems and is pristinely preserved just as nature intended. Guests experience natural streams, forests, pastures, wetlands and learn about the wide array of Forever Florida’s wildlife including alligators, black bears, white-tail deer and the endangered Florida panther. A variety of different adventures are offered including the Zipline Safari, Central Florida’s biggest zipline adventure, the first zipline roller coaster in the USA, The first Canopy Cycle experience in the USA and the always popular Coach Safari and Horseback Safari. Visitors make a positive impact on the environment as a substantial portion of revenues go toward the purchase of additional lands to be conserved at Forever Florida.

Joe Kleimanhttp://wwww.themedreality.com
Raised in San Diego on theme parks, zoos, and IMAX films, Joe Kleiman would expand his childhood loves into two decades as a projectionist and theater director within the giant screen industry. In addition to his work in commercial and museum operations, Joe has volunteered his time to animal husbandry at leading facilities in California and Texas and has played a leading management role for a number of performing arts companies. Joe has been News Editor and contributing author to InPark Magazine since 2011. HIs writing has also appeared in Sound & Communications, LF Examiner, Jim Hill Media, and MiceChat. His blog, ThemedReality.com takes an unconventional look at the attractions industry. Follow on twitter @ThemesRenewed Joe lives in Sacramento, California with his fiancé, two dogs, and a ghost.
Share
Facebook
Twitter
Linkedin
Email
Print
WhatsApp
Pinterest
ReddIt
Tumblr
Previous articleCreative Works to Hold Seminar on Laser Tag Operations
Next articleWynn Resorts And Show Media Place Interactive City Guide in 1000 Vegas Taxis