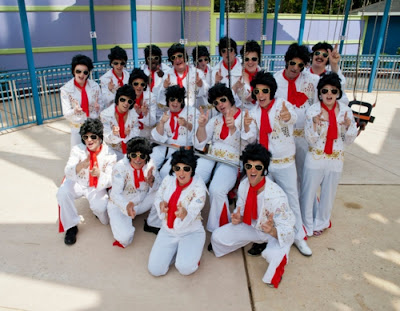 The newest sensation in tower rides, SkyScreamer takes traditional swing rides to the next level. Thirty-two guests board the ride and sit two across in open-air swings as they climb to the top of the SkyScreamer tower while spinning round and round. At full swing, guests soar in a 98-ft. circle at speeds of 40 mph high above the park below.

“This feels like a scene from Honeymoon in Vegas,” said American Coaster Enthusiast’s New Jersey chapter president Bret Ulozas. “Except instead of skydiving, Elvises and thrillseekers alike can take flight on SkyScreamer to achieve the same adrenaline rush.”

Six Flags season pass holders will preview SkyScreamer exclusively through May 20, and the ride will open to the general public May 23. Air Jumbo and Deja Vu are expected to preview to season pass holders this weekend and open to the general public May 23, and Fender Benders will open in June. Adventure Alley joins the park’s already stellar lineup of innovative rides and attractions including three children’s areas and record-breaking roller coasters including the world’s No. 1 wooden coaster, El Toro, the world’s tallest coaster, Kingda Ka, and one of the world’s top steel coasters, Nitro. For more information, visit www.sixflags.com/greatadventure.

Joe Kleimanhttp://wwww.themedreality.com
Raised in San Diego on theme parks, zoos, and IMAX films, InPark's Senior Correspondent Joe Kleiman would expand his childhood loves into two decades as a projectionist and theater director within the giant screen industry. In addition to his work in commercial and museum operations, Joe has volunteered his time to animal husbandry at leading facilities in California and Texas and has played a leading management role for a number of performing arts companies. Joe previously served as News Editor and has remained a contributing author to InPark Magazine since 2011. HIs writing has also appeared in Sound & Communications, LF Examiner, Jim Hill Media, The Planetarian, Behind the Thrills, and MiceChat His blog, ThemedReality.com takes an unconventional look at the attractions industry. Follow on twitter @ThemesRenewed Joe lives in Sacramento, California with his wife, dog, and a ghost.
Share
Facebook
Twitter
Linkedin
Email
Print
WhatsApp
Pinterest
ReddIt
Tumblr
Previous articleOschin Family Foundation GIves Multimillion Dollar Gift to California Science Center; New Air and Space Center and Temporary Pavilion for Shuttle Endeavor To Be Named For Samuel Oschin
Next articleDollywood’s Splash Country Opens for 12th Season