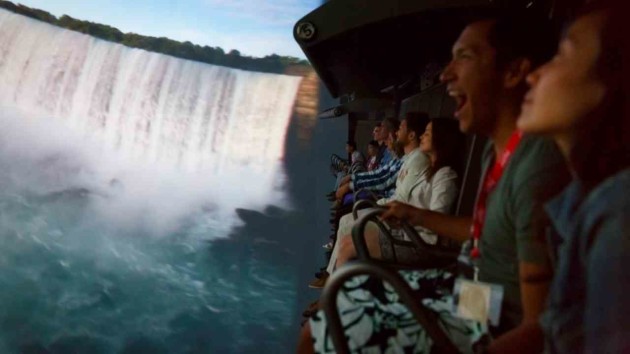 FlyOver America is a flight simulation ride that brings guests on a breathtaking, aerial tour of some of the greatest landmarks and regions throughout the United States in virtual flight technology. The attraction will be a fully immersive experience including wind, mist and even scents while soaring across some of America’s most spectacular sights.

The destination attraction is designed for locals and tourists alike and is suitable for ages 4 and older. During the feature ride, guests will strap in and be suspended in the air with feet dangling 10 to 25 feet above the ground in specialized ride vehicles before a giant half-spherical dome screen. Guests will truly feel the thrilling sensation of flight as they move in concert with theFlyOver America film and use of special effects.

“The addition of FlyOver America will offer guests a one of a kind experience while adding to the many lifelong memories we are committed to helping our guests create during each visit to Mall of America,” said Jill Renslow, Senior Vice President for Mall of America. “The innovative technology and talent behind the attraction reinforces Mall of America as a must-visit tourist destination.”

The custom-built attraction is being created by a worldwide team of technicians, manufacturers and consultants, including Los Angeles based former Disney “Imagineer” Rick Rothschild. Production is currently underway for the FlyOver America film as the FlyOver film crew visits every region in the country, filming from a helicopter over the course of the year to capture all seasons.

“Building on our success in Canada, we looked at many sites around the world before choosing Mall of America and the state of Minnesota for our US expansion”, said Andrew Strang, co-founder of FlyOver®. “We couldn’t imagine a better home for our first FlyOver America and are honored to launch at this world-renowned location. The appeal of feeling like you’re truly soaring over stunning landscapes in a fun environment is universal.”

Joe Kleimanhttp://wwww.themedreality.com
Raised in San Diego on theme parks, zoos, and IMAX films, InPark's Senior Correspondent Joe Kleiman would expand his childhood loves into two decades as a projectionist and theater director within the giant screen industry. In addition to his work in commercial and museum operations, Joe has volunteered his time to animal husbandry at leading facilities in California and Texas and has played a leading management role for a number of performing arts companies. Joe previously served as News Editor and has remained a contributing author to InPark Magazine since 2011. HIs writing has also appeared in Sound & Communications, LF Examiner, Jim Hill Media, The Planetarian, Behind the Thrills, and MiceChat His blog, ThemedReality.com takes an unconventional look at the attractions industry. Follow on twitter @ThemesRenewed Joe lives in Sacramento, California with his wife, dog, and a ghost.
Share
Facebook
Twitter
Linkedin
Email
Print
WhatsApp
Pinterest
ReddIt
Tumblr
Previous article
Disneyland Resort Announces Special Entertainment and Classic Attraction Upgrades for 60th Anniversary
Next article
Art Enthusiasts Unite for an Unforgettable Night of Food, Fun, and Fine Art as Ryman Arts Celebrates its 25th Anniversary on April 19!