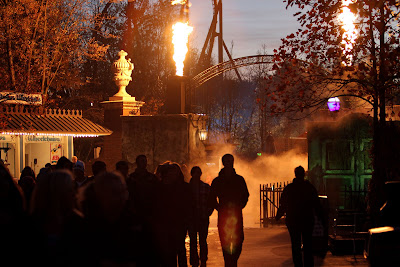 Gurnee, IL, USA (September 20, 2012) — Six Flags Great America kicks off its 22nd season of Fright Fest, which is presented by SNICKERS®, with new haunts and more scares than ever before. Starting September 29 and running weekends throughout October, the theme park transforms into a 100-acre, fog-filled land of shadows, ghosts and ghouls that offers thrills by day and fright by night. Fright Fest, the area’s premier Halloween event, returns this season with five haunted attractions, eight scare zones, eight shows and nearly 200 monsters throughout the park. Guests can also enjoy all of their favorite rides with an eerie makeover.

“We are unveiling our biggest Fright Fest event ever,” said Hank Salemi, Six Flags Great America park president. “In response to our huge success in 2011, we are expanding this year’s Fright Fest into the troughs of Roaring Rapids to create Wicked Woods and out into Hurricane Harbor to unveil a new nighttime dance club experience, Fright Club, which is rated NC–17. You simply cannot find a more immersive haunt experience than Six Flags’ Fright Fest.”

“There is no doubt that we are expanding and raising the bar on Fright Fest this year,” said entertainment manager, Kristopher Jones who has been with the park since the first Fright Fest in 1991. “We have more haunted zones and attractions than any past Fright Fest event.”

Joe Kleimanhttp://wwww.themedreality.com
Raised in San Diego on theme parks, zoos, and IMAX films, InPark's Senior Correspondent Joe Kleiman would expand his childhood loves into two decades as a projectionist and theater director within the giant screen industry. In addition to his work in commercial and museum operations, Joe has volunteered his time to animal husbandry at leading facilities in California and Texas and has played a leading management role for a number of performing arts companies. Joe previously served as News Editor and has remained a contributing author to InPark Magazine since 2011. HIs writing has also appeared in Sound & Communications, LF Examiner, Jim Hill Media, The Planetarian, Behind the Thrills, and MiceChat His blog, ThemedReality.com takes an unconventional look at the attractions industry. Follow on twitter @ThemesRenewed Joe lives in Sacramento, California with his wife, dog, and a ghost.
Share
Facebook
Twitter
Linkedin
Email
Print
WhatsApp
Pinterest
ReddIt
Tumblr
Previous articleWhiteWater West Experiences Strong Summer in Europe
Next articleGateway Ticketing Partners With Metafour UK For New UK Ticketing Solutions Company