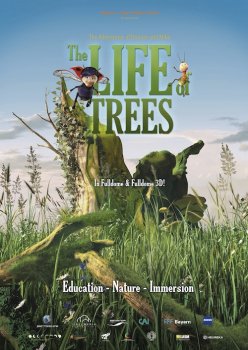 In 2004 the fulldome video “Kaluoka’hina: The Enchanted Reef,” produced by Peter Popp of Softmachine.de, burst onto the scene. This family-oriented animation took viewers on a trip to a magical reef, combining oceanography and astronomy. It tells the story of a reef dwelling fish and his friend, who have a grand adventure searching out the meaning of the Moon. The show has won various awards at such festivals as DomeFest and Animago.

In 2013, Popp, in cooperation with Ilusa Media, C.A. I Systeme GmbH, and Senator AG, released his latest animated fulldome show, “The Life of Trees,” a 360° adventure also available in 3D. This award-winning show follows the antics of Dolores and Mike, a pair of adventurous insects who set out to explore the microcosm of plants and trees, and their relationship to all other life on Earth. It is the first fulldome video created in omni-stereoscopic 3D.

“Life of Trees” is a featured screening at IMERSA Summit 2014, March 6-9 in Denver. Carolyn Collins Petersen of Loch Ness Productions interviewed Peter Popp about the show and asked him to share some insights about the fulldome medium.

You have been producing for fulldome for quite some time now and are one of the pioneers in full-length animation for the medium. What particular challenges do you think producers face in directing animation for fulldome?

Telling a story on the dome is different from telling a story for a flat screen. The shape of the dome has an influence on the use of the cinematographic means. Lighting, editing, camera movements, panning, close-ups have to be adapted to the domed environment. The dome perspective demands attention to the whole 360° environment. In a conventional film, one only has to consider a part of this 360° picture. In the dome all characters which can be seen the 360° scene have to be directed. It is important to direct the attention of the audience to the spot of the dome where the relevant action takes place. One way to achieve an immersive feeling is having a moving camera following the characters. Another way is to move the characters around the dome.

Life of Trees is 3D animation for 360 dome exhibition. Is there any particular scene that was difficult or more challenging to create than you expected?

One big challenge was the opening scene. The camera movement was toward the tree trunk, through a gap in the trunk, moving farther into a narrow opening in the ground inside the trunk. All this had to happen in one continuous camera move without any chance of cutting. The camera had to travel from a distance, from which a very rich environment is visible, up to 50 meters radius, and into the tree trunk. At certain points, details no bigger than fractions of a millimeter became visible. This enormous difference in scale made it necessary to capture a vast amount of data that had to be in the image in any given frame. And the amount of data increased the closer we got to the surface of the tree trunk.

Furthermore, due to the huge differences in scale the digital camera easily ended up suffering rounding errors which resulted in jittering. We faced the same problem in a later scene where photosynthesis was shown.

The IMERSA Summit is a place where people from many aspects of fulldome film production come together to share ideas, new methods, and talk about the future of the community. What ideas you hope Summit attendees will take away from your presentation and seeing The Life of Trees?

Fulldome is a fantastic medium and I would like to show that one can achieve a very good quality in dome productions. This is true for content as well as the quality and richness of the images. And, another important thing I want to point out is that dome films should not just communicate scientific facts but should have a story and also a message. The edutainment format is ideally suited for that.

What do you hope to do next in fulldome?

I hope I can contribute to develop the fulldome medium, bring it to a broader audience and make it more open to any kind of interesting story.

Judith Rubin
Judith Rubin ([email protected]) is a leading journalist, publicist, strategist, blogger, content marketing specialist and connector in the international attractions industry. She excels at writing about all aspects of design and technical design, production and project management. Areas of special interest include AV integration and show control, lighting design and acoustics, specialty cinema, digital video and world’s fairs. Judith has ties to numerous industry organizations. From 2005-2020 she ran communications, publications and social media for the Themed Entertainment Association (TEA). In 2013, she was honored with the TEA Service Award. She was development director of IMERSA, and co-chair of the 2014 IMERSA Summit. She was publicist for the Large Format Cinema Association in the 1990s, now part of the Giant Screen Cinema Association (GSCA) and has also contributed to the publications of PLASA, IAAPA and the International Planetarium Society. Already making her mark as a magazine and book editor, Judith joined World’s Fair magazine in 1987, which introduced her to the attractions industry. Launching as a freelancer in the mid 1990s she has contributed to dozens of publications and media outlets including Funworld, Lighting&Sound America, Sound & Communications, Urban Land, The Raconteur and The Planetarian. She joined InPark in 2010. Judith earned a Bachelor of Fine Arts from Pratt Institute. She has lived in New York City and the San Francisco Bay Area, and now makes her home in Saint Louis, where she is active in the local arts and theater community.
Share
Facebook
Twitter
Linkedin
Email
Print
WhatsApp
Pinterest
ReddIt
Tumblr
Previous articleRando Productions to Auction off Rando Christmas Tree for Shane’s Inspiration Gala
Next articleTurkey’s VIALAND Expanding Theme Park in 2014 With New Attractions