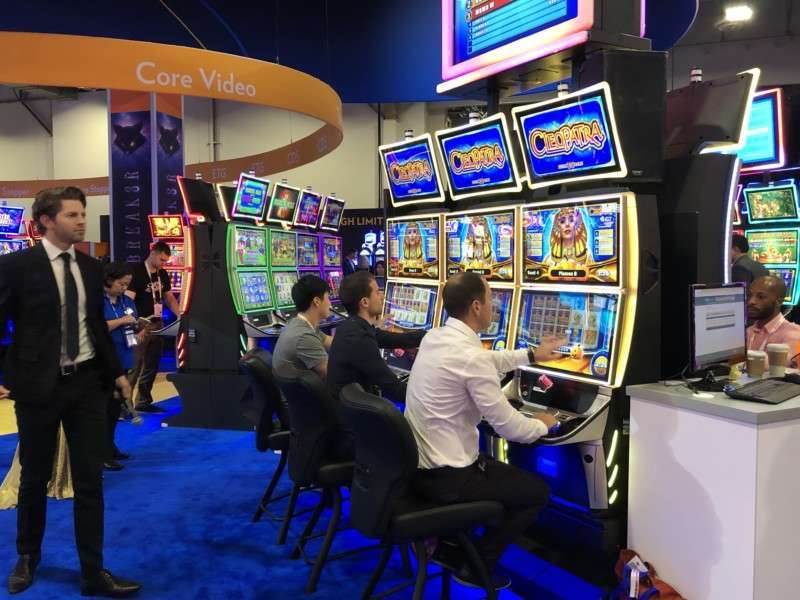 The Global Gaming Expo (G2E), held annually in Las Vegas, frequently makes headlines for the latest slot machines unveiled. That itself draws parallels to themed entertainment, with vendors securing licensing rights for the latest IP-branded games (think Monopoly or Wizard of Oz). There is also an abundance of Asian-themed games, a nod to the fact that, like the theme park business, casinos see much growth potential in Asia.

But there are other issues that the larger gaming community is wrestling with that might be instructive for themed entertainment. In particular, how the industry is integrating VR and a new partnership between Caesars Entertainment and UNLV are interesting developments.

Doubling down on VR

In separate sessions, both Gregg Katano of Hologate and Christopher Crescitelli of Dreamland XR spoke on the applications of VR/AR technology in the gaming and hospitality environment. Katano stressed the importance of ensuring the technology is delivering on its promise, which he claims not all VR experiences do. “If technology doesn’t seem like magic, it’s already obsolete,” he said.

Crescitelli pointed out that VR is already available in Las Vegas, but as standalone experiences not tied to gaming. MGM Grand, The Venetian and Linq have all had or will have VR experiences.

He is currently working on portable VR systems that can be rented and delivered to hotel rooms. He sees this initially as ideal for eSports players who want to practice in their own hotel room before a competition. Of course, it could also be used by regular gamers, and might have appeal in non-gaming hospitality environments as well.

Within the casino, Crescitelli doesn’t think we are close to seeing VR table games, but could see situations where eSports tournaments are experiences via VR, with betting on players taking place, similar to a sports book. As for slot machines, Crescitelli thinks there are still some challenges to integrating VR into slots. Slot machines, which rely on Random Number Generators to determine outcomes, have been experimenting recently with skill-based gaming. As the industry continues to explore how random winning can be paired with skill-based games, Crescitelli predicts a hybrid model will be most likely to succeed. Once those underlying issues are fully addressed, VR could provide an additional layer of interactivity to such systems.

Finally, Crescitelli sees more immediate applications for AR in the casino environment. AR could provide instructive tips for how to play table games or show ads to consumers within the casino, offering deals and resort information. This technology is already largely available today, but has not been adopted yet in such a wholesale fashion.

Early in 2019, Caesars Entertainment formalized a partnership with University of Nevada Las Vegas (UNLV) to allow students the opportunity to help solve real-world problems in the gaming industry with a dedicated space to test and study their ideas. Elly Reed, Product Director for Caesars led a panel during G2E that highlighted the new partnership. She began by explaining how the two institutions came together. The gaming environment can be difficult for innovation, she explained. Casino owners rarely are inspired to try out new ideas in their properties. Dedicating casino floor space or hotel rooms for unproven ideas risks revenue loss.

On the university side, UNLV’s AVP for Economic Development Zach Miles explained that universities had shifted from a reactive model to a more proactive model in the 2000s — engaging with industry, the community and government actively and in a way that had not been done before. Within the last five years, universities have evolved again to provide more of a value-add approach. Instead of developing ideas and research in a vacuum, universities want to push innovation and resources directly into the marketplace.

Caesars and UNLV began to realize they were both looking at opposite sides of the same problem and that they could help one another. The result was Black Fire Innovation. Housed in a new building in Harry Reid Technology Park, Black Fire provides dedicated lab space to test out new ideas and concepts developed by UNLV students. The facility includes two fully built-out hotel rooms, a commercial kitchen and other infrastructure common to the hospitality industry.

Caesars’ Director of Business Innovation and Technology Strategy Andrew Baca stresses that the innovations developed are open to the entire industry. “We are providing a pathway to market,” says Baca. “Students develop ideas, Caesars provides a space, and ultimately we can also provide purchase orders once the idea is tested and successful.”

Miles says he is measuring the success of Black Fire by the quality of corporate engagement with students as well as the rate in pushing out innovations into the marketplace. He’s also hoping to attract more tech companies to partner on the project (currently, Intel is providing technology support for Black Fire).

Both Caesars and UNLV are excited with the initial results of Black Fire Innovation, seeing that ideas and concepts are being accelerated through the development cycle. “Black Fire can make things happen, and much sooner,” says Reed.

Betting on the future

The gaming industry offers many parallels to themed entertainment, and is part of the larger LBE landscape. While Las Vegas and other gambling destinations have at times experimented with large scale themed attractions, there remains growth potential for both vendors and operators in this market. Perhaps that’s why themed entertainment leaders like ETI’s Roberta Perry have been involved with G2E for years. This year she moderated a panel on “Powerful Women Affecting Powerful Change,” featuring C-suite execs from across the gaming spectrum. Says Perry, “Our industries are stronger when we work together and solve problems that transcend sectors.”