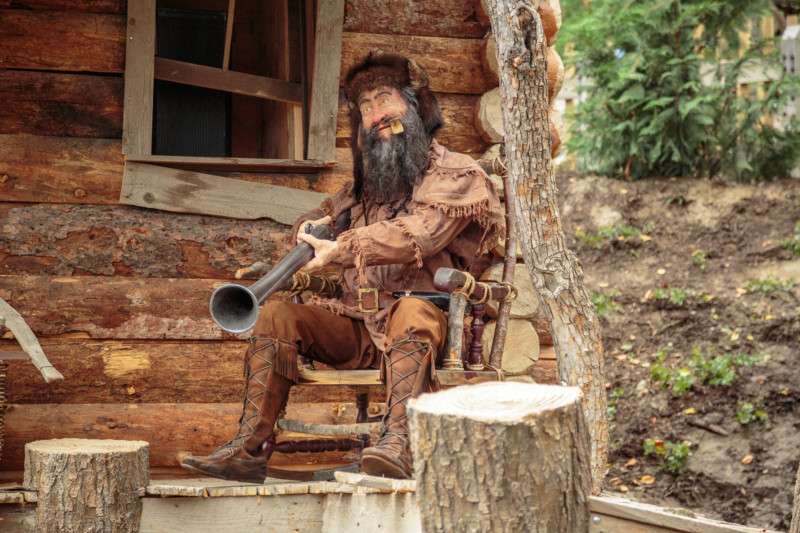 Calico Ghost Town is the original heart of Knott’s Berry Farm theme park in Buena Park, California. Comprised largely of a collection of authentic, 19th-century buildings brought to the park by founder Walter Knott beginning in the 1940s from the real ghost town of Calico in Southern California’s High Desert, Ghost Town is one of themed entertainment’s earliest and most successful immersive “lands” – it feels real because, in a major sense, it is real. When Knott connected with amusement ride impresario Wendell “Bud” Hurlbut, the attractions that would emerge from the relationship would grow the reach and legend of Ghost Town further than its narrow streets and charmingly crumbling buildings.

In 1960, the commercial heart of Ghost Town was established with the opening of Hurlbut’s Calico Mine Ride, a thematic and historic tie to the larger Calico story. At the end of the decade, the story was expanded with the opening of Hurlbut’s masterpiece, the Calico Log Ride (now called the Timber Mountain Log Ride). Now, the residential and industrial centers of the Ghost Town legend make it one of the best immersive locations in any park.

When Garner Holt Productions, Inc. (GHP) was approached to help breathe new life into the Timber Mountain Log Ride in 2012, a major objective was to include references to Ghost Town to further tie the district together. “We wanted to make the characters on the Log Ride seem like they were part of a bigger community,” said Garner Holt, GHP’s founder and president. “It was important when we were adding new animatronics and scenes to populate them with characters that looked like they came right out of Ghost Town.” To that end, certain figures were sculpted to look like, among others, Marilyn and Cecelia, a pair of fiberglass saloon girls used as a photo op in the park. Signage in the attraction added nods to Ghost Town and its denizens, and even to other locations in the park (sharp-eyed guests may have seen a poster advertising an auction at Jeffries Barn, former home of Knott’s beloved Mott’s Miniatures display).

In 2013, when GHP joined Knott’s again to reimagine the Calico Mine Ride, the same philosophy prevailed. “Our sculpts, faces, costumes, colors all had to look like they belonged in that space and time,” said Holt. One new animatronic figure in the revamped ride is Seldom Seen Slim, the same character depicted in the iconic prospector and mule statue that once graced the entrance to Ghost Town (a modern version is the first thing most park visitors see when approaching Knott’s, on the corner of Beach Boulevard and Crescent).

So when Knott’s approached GHP in July 2018 with plans to reimagine yet another classic attraction, it seemed natural to make it part of the larger Ghost Town story, too. The aging Bigfoot Rapids attraction in the park’s southwest corner (known as White Water Wilderness) needed some polishing. Knott’s new creative lead, Ken Parks (creator of the definitive Calico-story expansion, the immersive “Ghost Town Alive” experience), developed a storyline centered around the adventures of Potts and Coulter, two real-life contemporaries of exploration icons Lewis and Clark. The theme would put guests at the center of a rollicking raft ride down uncharted rivers, meeting wildlife and fellow pioneers along the way. “We thought it was a natural fit and perfect expansion of the Calico story,” continued Holt. “It was a prequel to the rest of the area.”

“Calico River Rapids tells the story of the expansion of the Western territories, which can be found just outside of Calico,” said Ken Parks. “The territories are wild, untamed and largely untouched by settlers and civilization. Calico and the area surrounding it exist in the same world. Riders will see that the Calico Mine Company is at work within the wilderness as well as the Timber Mountain Logging Company.”

The redeveloped area was dubbed Calico River Territory, and its star attraction renamed Calico River Rapids. Both the area and ride opened in May 2019. Where the Mine Ride and Log Ride are filled with dozens of animatronic humans and relatively few animals, the Rapids upgrade would echo the wild nature of the region by turning that concept upside down. Of the nearly two dozen new animatronic figures in the attraction, only one is human—a wild old backwoodsman who fires at passing rafts with an oversized blunderbuss. GHP collaborated once again with Knott’s to develop new scenes and characters for the attraction, filling it with a variety of friendly and fearsome critters around every turn. Outside the attraction, guests are invited to use a trio of TNT plungers to soak riders with massive geysers of water— but every once in a while, guests will themselves be hit with a hidden jet of water, a first for the non-riders-as-tormentors trend in water rides.

To give an impression of man’s first incursions into the wild region, GHP constructed two cabins as scenery (they also house control and audio equipment). Aside from these signs of encroaching civilization, Calico River Rapids is populated by new animatronics in the form of woodpeckers, rattlesnakes, wolves, raccoons, bears, foxes, chickens (so many chickens), mountain lions, and, at long last, a “Bigfoot”-type creature in the darkened
tunnel of the ride’s finale. “I always thought that was sort of strange,” said Holt. “You’d get on ‘Bigfoot Rapids’ and never see a Bigfoot!” Now a larger-than-life animatronic version of the hairy beast roars at guests in a newly stalactite and stalagmite festooned cave at the end of the river.

Knott’s invested heavily in the total reimagining of Calico River Rapids including new paint schemes for the six-person rafts, hundreds of new plants and trees, a spectacular new audio and lighting package, plus themed sets and the various animatronics that greet guests along the way. Even the enclosed queue and lots area were given the wilderness treatment, clad with nearly a mile of half-peeled timber native to Southern California, and filled with loving detail that helps make a formerly quasi-themed river ride into a truly immersive family thrill ride experience.

It proves, once again, that the rich vein of stories in Calico Ghost Town is very much alive. • • •

Joe Kleimanhttp://wwww.themedreality.com
Raised in San Diego on theme parks, zoos, and IMAX films, Joe Kleiman would expand his childhood loves into two decades as a projectionist and theater director within the giant screen industry. In addition to his work in commercial and museum operations, Joe has volunteered his time to animal husbandry at leading facilities in California and Texas and has played a leading management role for a number of performing arts companies. Joe has been News Editor and contributing author to InPark Magazine since 2011. HIs writing has also appeared in Sound & Communications, LF Examiner, Jim Hill Media, and MiceChat. His blog, ThemedReality.com takes an unconventional look at the attractions industry. Follow on twitter @ThemesRenewed Joe lives in Sacramento, California with his fiancé, two dogs, and a ghost.
Share
Facebook
Twitter
Linkedin
Email
Print
WhatsApp
Pinterest
ReddIt
Tumblr
Previous articleJRA: “The One with the Pop-Up”
Next articleThe Hettema Group: Elevator Pitch

Cityneon to construct R&D and production facility in Qatar