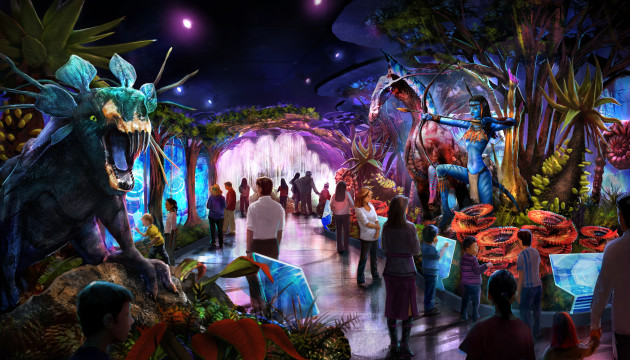 Glendale, CA, USA — Global Experience Specialists, Inc. (GES) has announced a partnership with Twentieth Century Fox Consumer Products (Fox) to develop and tour an exhibition based on James Cameron’s AVATAR.  The state-of-the-art global touring exhibition, which will kick off in the fall of 2016, is inspired by the amazing creatures and environments of the world of Pandora first introduced in the record-breaking film. Fox and GES are developing the interactive attraction in consultation with James Cameron and Jon Landau’s Lightstorm Entertainment.

“This unprecedented global exhibition will create a truly memorable experience for fans,” said Jeffrey Godsick, president of Twentieth Century Fox Consumer Products. “Bringing the world of Pandora to life and comparing it to the wonders of our own planet, the AVATAR exhibition will bring together immersive new storytelling and science in a tangible, engaging forum.”

“We have been longtime fans of James Cameron’s visionary work and this is a unique opportunity to showcase AVATAR to fans around the world,” said Eddie Newquist, chief creative officer and executive vice president of GES.  “We are thrilled to be able to provide visitors the opportunity to learn more about the wonders of Pandora through this exhibition.”

“The world of AVATAR, made possible by James Cameron’s vision and ingenious technological advancements, fits perfectly with GES’ philosophy of storytelling through art and science,” said Steve Moster, president of GES and president and CEO of Viad. “We couldn’t be more excited to present Cameron’s world of Pandora to film fans, school groups and families around the world.”

“As we expand the AVATAR story world, we look for compelling ways to connect with our current – and future – fans.  This exhibition is an ideal way to share new and exciting insights into life on Pandora that we hope will inspire guests during their visit and beyond,” added Kathy Franklin, president of franchise development for Lightstorm Entertainment.

The AVATAR exhibition will include immersive, interactive displays that highlight Pandora, the alien world created by James Cameron, putting it in the context of science here on Earth. The exhibition will treat Pandora as a real place that can be studied and visited. The 10,000 square foot experience will allow for a dynamic 45-minute guest engagement offering a wide range of exciting explorations and captivating environments highlighting bioluminescence, connectivity among Pandora’s living things as well as its incredible and diverse flora and fauna. A unique look at the complexity of indigenous peoples and cultures through the lens of the Na’vi, Pandora’s native inhabitants, will be a key component of the exhibition.  By showcasing the science and wonder of Pandora, the exhibition will allow guests to better understand the beauty – and fragility – of our own planet Earth.

Highlights of the 10,000-square-foot exhibition include:

GES, producer of blockbuster touring-themed attractions and world-class live events across the globe, will design, produce and tour the AVATAR exhibition to multiple global markets to be announced at a later date.

Released in 2009, James Cameron’s AVATAR is the highest-grossing film in motion picture history, with a box office gross of nearly $2.8 billion. Mesmerizing all ages across the globe with its otherworldly visuals and groundbreaking special effects, the film quickly became a worldwide phenomenon so popular it will be followed by three sequels, with the first sequel due for release in late 2017. AVATAR was named best drama at the Golden Globes and won Academy Awards for cinematography, visual effects and art direction.

Joe Kleimanhttp://wwww.themedreality.com
Raised in San Diego on theme parks, zoos, and IMAX films, InPark's Senior Correspondent Joe Kleiman would expand his childhood loves into two decades as a projectionist and theater director within the giant screen industry. In addition to his work in commercial and museum operations, Joe has volunteered his time to animal husbandry at leading facilities in California and Texas and has played a leading management role for a number of performing arts companies. Joe previously served as News Editor and has remained a contributing author to InPark Magazine since 2011. HIs writing has also appeared in Sound & Communications, LF Examiner, Jim Hill Media, The Planetarian, Behind the Thrills, and MiceChat His blog, ThemedReality.com takes an unconventional look at the attractions industry. Follow on twitter @ThemesRenewed Joe lives in Sacramento, California with his wife, dog, and a ghost.
Share
Facebook
Twitter
Linkedin
Email
Print
WhatsApp
Pinterest
ReddIt
Tumblr
Previous articleSally Corporation Creates New Kind of Stockholm Syndrome with House of Nightmares
Next article“TORUK – The First Flight” Announced as Name of Cirque du Soleil’s Avatar-inspired Show