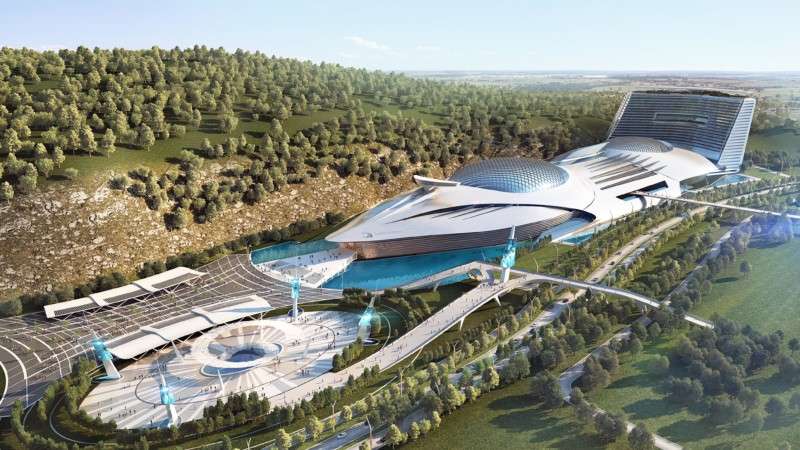 Goddard Group will celebrate its 15th Anniversary in conjunction with IAAPA 2017 in Orlando, Florida. Concurrently, Goddard Group has unveiled the latest details on the company’s roster, including six immersive projects now under construction around the globe. In addition, during the past year the company has also been involved in presenting acclaimed immersive live theater presentations in New York.

“We’ve enjoyed quite a ride these past 15 years!” says Gary Goddard, Chairman/CEO of Goddard Group. “This has been a banner year for us so far, but our sights are really set on 2018 and beyond, when our next generation of highly immersive parks and attractions will be coming online. Between the exciting new experiences we are creating in China, Indonesia, and the Middle East, along with everything else happening around the world, there’s quite a bit to be enthusiastic about.”

He adds, “It’s extremely gratifying that we’ve achieved what we set out to do 15 years ago. It’s also quite humbling for me that at this point in my career, my team and I continue to have the opportunity to create our largest and most exciting projects yet. For that, we’re all very grateful.”

“The Kingdom of Poseidon,” Harbin, China

Goddard Group is pleased with the opening of the massive new indoor theme park, waterpark, and aquarium entitled “The Kingdom of Poseidon,” in Harbin, China, which the company designed for its client, the Malaysia-based KW Zone Group. The new destination attraction, which includes a family hotel and a themed RD&E district, is a unique experience. According toTaylor Jeffs, Goddard Group’s Creative Director, “Our goal was to create something entirely different with ‘Kingdom of Poseidon,’ by providing new ways to involve park guests in the mysteries, adventures, myths, sagas, and legends about the seas – stories which have been with us since mankind’s earliest days of civilization. Man’s connection with the world’s oceans are communicated at the park through a series of exciting and heart-felt emotional attractions.” 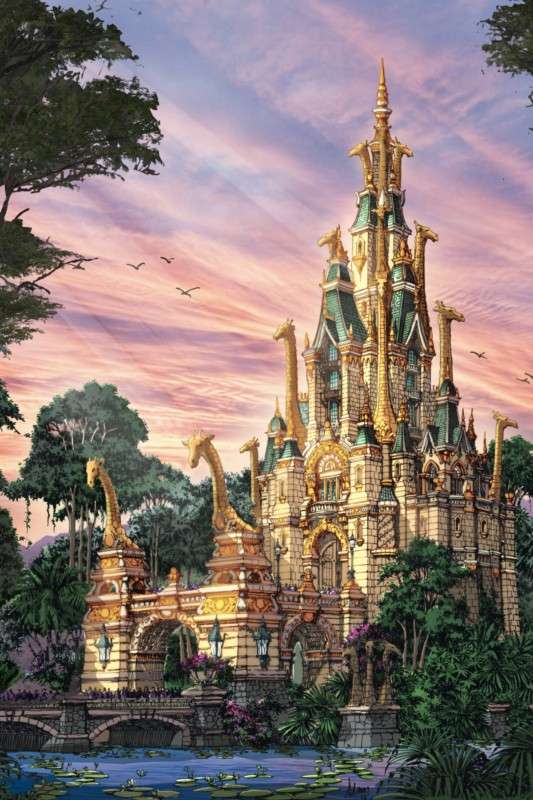 Of Goddard Group’s upcoming slate, the largest project is Chimelong Group’s “Forest Kingdom” theme park, a major new destination resort and theme park that is being built in Qinyun, China. Destined to become a world class attraction, the new “Forest Kingdom” park is a follow up to Chimelong’s wildly successful “Ocean Kingdom” theme park in Zhuhai, China, which debuted in 2014, and hosted a record-breaking 8.4 million visitors in 2016. Goddard Group executives expect the new “Forest Kingdom” to be a “fantastic next step for Chimelong’s continued growth. We are honored to be working with Chairman Su and his dedicated team,” Mr. Goddard said.

A separate project, also being developed for Chimelong Group, will be located next door to Chimelong’s “Ocean Kingdom” (artwork top of page). This separate new project – as yet unnamed – will become a second gate attraction intended to be a complimentary experience to “Ocean Kingdom.” Slated to open in late 2018, and designed to resemble a giant, futuristic, high-tech, above and under water Sea Ship and Submarine, the new attraction will be the world’s largest aquarium when it opens. The attraction will immerse guests in a high-tech sea life experience threaded by messages of education and conservation. 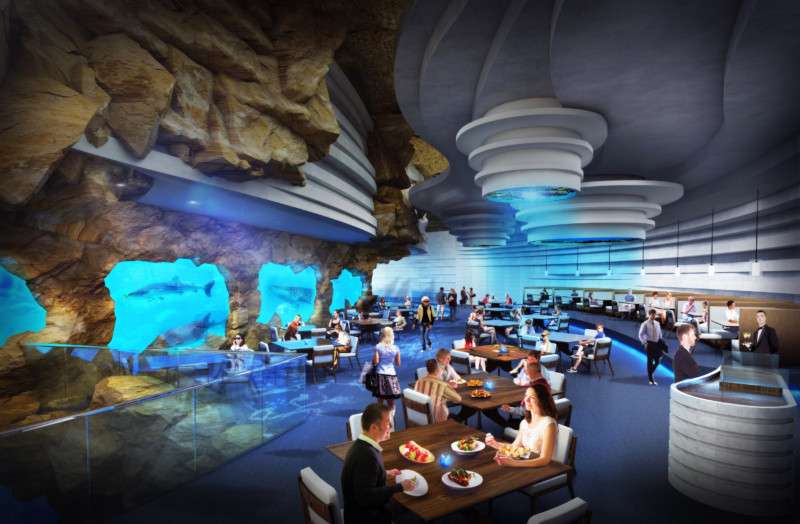 Further north in China, Haichang’s “Shanghai Polar Ocean World” theme park, also designed by Goddard Group, recently celebrated a major milestone. The facility construction was topped off, putting the 300,000 square meter project on-track for its targeted August 2018 debut. The park is intended to bring a new kind of immersive entertainment world to visitors and to become the ideal complement to Shanghai Disneyland. 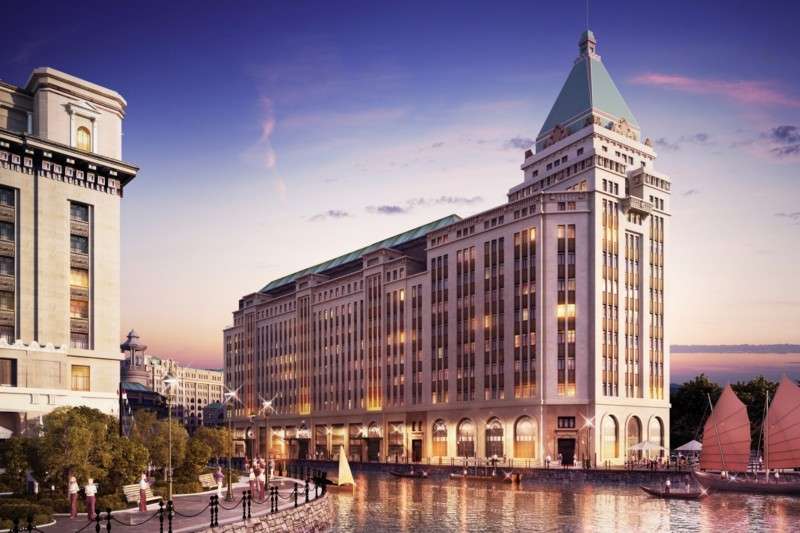 In the Chinese city of Hengdian, another kind of entertainment attraction also designed by Goddard Group is aiming for a 2018 premiere as well. Hengdian Movie Studios, known throughout China for its massive backlot of standing sets, including vintage period Chinese villages and towns, and also including a near full-scale standing set of the Forbidden City, will now present its largest new standing set, entitled “The Shanghai Bund Movie World.” When that new standing set comes online, it will serve dual functions – both as a working film and television production facility, featuring a massive recreation of the pre-WWII Shanghai Bund, as well as a movie-themed theme park that treats guests to an authentic, behind-the-scenes look at how China’s most popular media content is created.

In South Korea, Goddard Group was recently announced as the designer of Lotte’s new theme park, currently undergoing site preparation in the city of Busan. In addition, Lotte’s flagship park in Seoul, “Lotte World,” has seen a surge in attendance over the last few years, following the addition of eight new Goddard Group-designed attractions.

Furthest out on the horizon is one of Goddard Group’s mostly highly-anticipated projects – the inaugural collaboration between the company and Cirque du Soleil of a Cirque-themed park set to open near Puerto Vallarta, Mexico, in 2020. 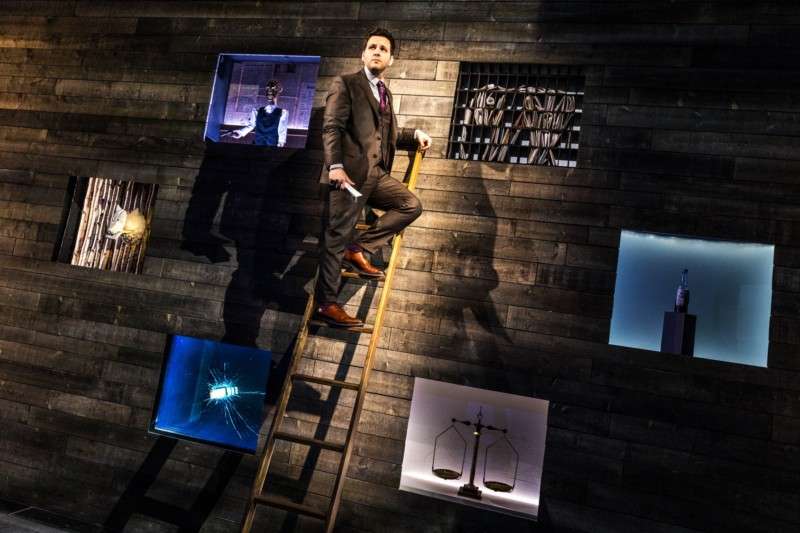 “In & Of Itself” and “The Encounter” – Live Theatre in NYC

In the world of New York City theater, Gary Goddard Entertainment Live (GGE LIVE), the company’s Live Entertainment Division led by Tony Award winning producers Gary Goddard and Forbes Candlish, has recently produced two highly successful and immersive theatrical presentations: “In And Of Itself” (Off Broadway) and “The Encounter” (On Broadway). Both shows were designated New York Times Critic Picks. “The Encounter” was called “One of the most fully immersive theater pieces ever created,” by Ben Brantley of the Times, while Alexis Soloski of the Times has said of “In & Of Itself,” “Derek DelGaudio sets himself apart from the abracadabra crowd. Beautiful! Tender! Astonishing!”

“In & Of Itself, has just announced its 4th extension in New York – the play is now set to continue through May 6, 2018.  Says Forbes Candlish, GGE LIVE’s Supervising Producer, “For over 30 years we have been producing shows on and off Broadway, and during that time, we have always been interested in pushing the envelope and breaking the fourth wall. As the medium of live theater keeps moving in the direction of immersion for the audience, we plan to remain at the forefront of this movement. We believe this is the future of live entertainment.”

In addition to their on-going current work, Gary Goddard and Goddard Group’s legacy of success can be seen in the many milestone anniversaries currently taking place around the world during 2017 – anniversaries of acclaimed, high-profile projects he and his team designed and/or produced in the past. These include:

** The ten year anniversary of the “Magic Light Parade” at Six Flags in Mexico City, Mexico.

** The 27th anniversary year of both “Sanrio Puroland” in Tokyo and “Sanrio Harmonyland” in Kyushu, Japan.

** The 12th anniversary year of the Georgia Aquarium.

** Other Gary Goddard designed attractions which continue to thrive decades after their initial openings include “The Enchanted Kingdom” in Manilla; multiple “Fantasia Lagoon” water parks in Bangkok; and “Jurassic Park: The Ride,” “Terminator 2: 3/D,” and “The Amazing Adventures of Spider-Man 3D/4D” ride, all of which premiered at Universal Studios’ theme parks in the years between 1996 and 1999.

Joe Kleimanhttp://wwww.themedreality.com
Raised in San Diego on theme parks, zoos, and IMAX films, InPark's Senior Correspondent Joe Kleiman would expand his childhood loves into two decades as a projectionist and theater director within the giant screen industry. In addition to his work in commercial and museum operations, Joe has volunteered his time to animal husbandry at leading facilities in California and Texas and has played a leading management role for a number of performing arts companies. Joe previously served as News Editor and has remained a contributing author to InPark Magazine since 2011. HIs writing has also appeared in Sound & Communications, LF Examiner, Jim Hill Media, The Planetarian, Behind the Thrills, and MiceChat His blog, ThemedReality.com takes an unconventional look at the attractions industry. Follow on twitter @ThemesRenewed Joe lives in Sacramento, California with his wife, dog, and a ghost.
Share
Facebook
Twitter
Linkedin
Email
Print
WhatsApp
Pinterest
ReddIt
Tumblr
Previous articleTech Museum of Innovation Develops AR Program for Newest Body Worlds Exhibit
Next articleHong Kong Disneyland Begins Construction on Six Year Expansion

MARTIN PALICKI: Find voices that can help share stories for a global audience