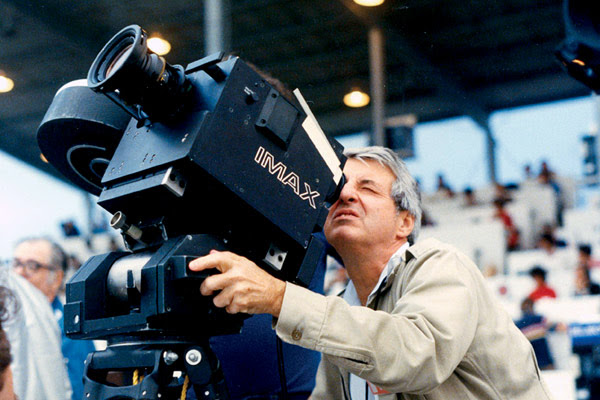 Holly Springs, NC, USA — The Giant Screen Cinema Association (GSCA) is very pleased to announce that renowned filmmaker and IMAX co-inventor and co-founder Graeme Ferguson is the recipient of its inaugural Outstanding Achievement Award. Mr. Ferguson accepted the award at the GSCA Achievement Awards on the evening of Tuesday, October 4, at the Fairmont Royal York Hotel in Toronto.

Toronto native Graeme Ferguson was the driving artistic force behind IMAX. For Expo ’67 in Montreal, Ferguson directed the multi-screen, multi-projector filmPolar Life, which viewers watched while seated on a central rotating turntable in the middle of 11 screens. The film was so successful that Ferguson, along with fellow filmmaker Roman Kroiter, had the idea of creating a movie theater with a similar immersive experience but with a single giant screen using only one projector. To achieve that, Ferguson and Kroiter recruited high school friend and businessman Robert Kerr, and engineer William Shaw, also a high school friend, to develop the camera, projection system, and theater configuration. Their IMAX (Maximum Image) system debuted at Expo ’70 in Osaka, Japan, with the first-ever IMAX film, Tiger Child. With a 15 perf/70mm film frame that was nearly 10 times larger than conventional 35mm film, the bright, clear, steady, and giant images resulted in a revolutionary immersive theater experience.

Ferguson has continued to make giant screen films throughout his career as director, producer, writer, and cinematographer, and his films have been seen by millions of people around the world. He was instrumental in getting IMAX cameras into space and fueling the dreams of would-be astronauts. Susan Helms credits the film The Dream Is Alive for inspiring her to become an astronaut, and she appears in the IMAX documentarySpace Station 3D.

“We are so honored to present the first GSCA Outstanding Achievement Award to Graeme Ferguson,” says GSCA Executive Director Tammy Seldon. “He has inspired an entire industry and countless viewers around the world for decades.”

“We respect and thank him for his artistic vision and passion,” says GSCA board member Diane Carlson of Pacific Science Center. “Simply put, without Graeme Ferguson, we would not have the industry we now have.”

“I have admired Graeme ever since I first entered the giant screen industry,” says GSCA Board Chair Gordon Stalans of the Tennessee Aquarium. “The films he has brought to our audiences are outstanding and impactful. But even more than his work product, I admire the way Graeme goes about conducting his business in a quiet, humble way but with the unwavering determination to do the job and do it right. That is the mark of a true giant in any industry.”

The annual GSCA Achievement Awards honor excellence in giant screen filmmaking, marketing, and lifelong learning and are presented during the GSCA International Conference and Trade Show. The 2016 conference continues through September 7 in Toronto, Ontario, Canada, hosted by the Cineplex Scotiabank IMAX Theatre and Ontario Science Centre. The conference, which is attended by giant screen industry professionals from around the world, includes screenings of new films, films in production, projects in development, professional development sessions, a technical session and trade show. For more information visit www.giantscreencinema.com.

Joe Kleimanhttp://wwww.themedreality.com
Raised in San Diego on theme parks, zoos, and IMAX films, Joe Kleiman would expand his childhood loves into two decades as a projectionist and theater director within the giant screen industry. In addition to his work in commercial and museum operations, Joe has volunteered his time to animal husbandry at leading facilities in California and Texas and has played a leading management role for a number of performing arts companies. Joe has been News Editor and contributing author to InPark Magazine since 2011. HIs writing has also appeared in Sound & Communications, LF Examiner, Jim Hill Media, and MiceChat. His blog, ThemedReality.com takes an unconventional look at the attractions industry. Follow on twitter @ThemesRenewed Joe lives in Sacramento, California with his fiancé, two dogs, and a ghost.
Share
Facebook
Twitter
Linkedin
Email
Print
WhatsApp
Pinterest
ReddIt
Tumblr
Previous articleD3D Updates Arizona Science Center’s Giant Screen to 4K 3D Digital.
Next articleIAAPA Offering Four Marque Networking Opportunities During Attractions Expo 2016