When you think about it, this year’s Halloween Horror Nights theme of “Ripped From the Silver Screen” couldn’t be more appropriate for Universal Studios. They are a company founded on making movies, and their park lives by the motto of “Ride the movies.” Perhaps that is why I most thoroughly enjoyed the park’s icon house, Silver Screams.

Silver Screams features this year’s icon character, the Usher, who, having been killed at the movie house decades ago, has come back to show some of his favorite hits, and perhaps trap a few more souls in the theater. Upon entering the dilapidated façade of the Universal Palace theater, it is seemingly brought back to life as the usher guides you into different hallways with giant movie posters detailing the movie scene you are about to walk into. Some, like Shaun of the Dead, are amusing, others, like The Strangers, are downright creepy. All are increadibly well themed. This house seems to be the most cerebral, and requires a second walkthrough to fully appreciate all the details.

Chucky’s house was also a favorite. As you are shrunk down to toy size, Chucky comes to life and battles it out with you and a variety of other childhood toys, like the Hanging Monkeys game, where chains of plastic monkeys hang from the ceiling and, in addition to distracting you from a scare, also are adept at grabbing glasses and pulling them from your face (bespectacled haunters beware!).

The rest of the houses run the gamut from the campy, tongue-in-cheek Leave it To Cleaver! House, to the ornately themed Dracula soundstage house. Although some themes seemed recycled from previous haunts, each house was refreshingly unique. I was impressed that there was no “house” house…that each environment brought to life wasn’t just a haunted “house” but a unique and special locale.

It also seemed as though scare tactics made more use of light and sound to scare people. Scare-actors activated switches that triggered strobe lights or other lighting effects, as a loud scene-appropriate noise startled even the most casual observer (one scare so startled a member of our party that he ran ahead of our group two scenes before finally putting the brakes on!).

The park’s scare zones are as to be expected. The typical themes of contamination, anarchy, invasion and desolation are all addressed, though the “Lights, Camera, Hack-tion” zone provided a new setting for heavily make-upped people to come up to you and plead “Help me!!”

Finally, the Bill & Ted show delivered on its annual promise of lampooning pop culture’s best and worst in a completely and unabashedly crass manner.

The entire event is well-done, especially in a year that could have seen a large number of cost cutting moves and rehashed gags. As usual, expect every night to be popular, moreso on weekends, so be sure to plan ahead and consider one of Unviersal’s Express or RIP options. For more information, visit www.halloweenhorrornights.com. 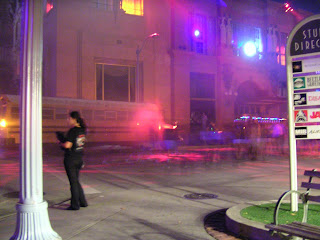 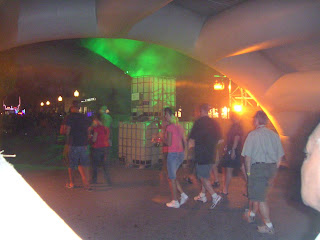 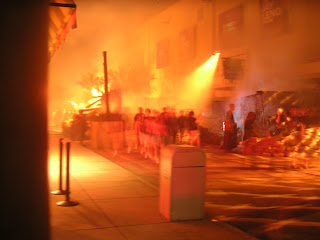