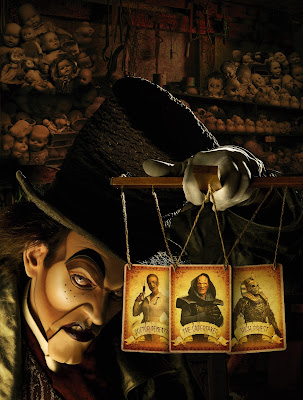 Singapore — This October, Universal Studios Singapore once again morphs into a land of horror with the region’s largest and most elaborate scare-fest– Halloween Horror Nights 2.
Riding on the immense success of its debut last year, Halloween Horror Nights returns this year as a bolder and bigger incarnation. Universal Studios Singapore is upping the scare ante by doubling the number of scareactors and building three elaborate haunted-houses amongst five highly immersive scare zones.
This year, guests will be transported into a terrifying nightmare, which will begin in the underbelly of the Puppet Master’s production line. His imaginary friends are more than what they seem, as guests stand witness to the Puppet Master’s brutal strive for perfection, only to discover the morbid truth about visitors to his puppet workshop that mysteriously went missing.
Thrill seekers will experience an intensifying series of scares from the event’s line-up of haunted houses from the foreboding atmospheres of The Insanitarium with Doctor Dementia and her ruthless experimental therapies, to the Dungeon of Damnation, a desolate realm of death where pure evil and suffering resides under the merciless hands of The Undertaker.
Ms Andrea Teo, Vice President of Entertainment, Resorts World Sentosa, said: “Halloween Horror Nights was a sell-out event last year. This year we have pushed the envelope in creating even better – and scarier – experiences for our guests. With even more scare-zones, haunted houses, effects, props and scareactors this year, we will surpass the high standards that we have set last year.”
Halloween Horror Nights 2 will increase its footprint to include an additional zone to take up part of The Lost World, where the all-new haunted house, The Insanitarium, resides. Nine of the park’s favourite theme park attractions, including TRANSFORMERS The Ride, Battlestar Galactica and Shrek 4D will also be open this year.
“Those who found last year’s event thrilling should brace themselves for even more scares this year,” Ms Teo added.
Halloween Horror Nights 2 will run for seven nights over two weekends, from 19 to 21 October and 25 to 28 October 2012, from 8 pm to 12 midnight each evening.
Halloween Horror Nights 2 is a separately ticketed event and not included within regular daytime theme park admission. Daytime theme park guests will be able to upgrade their daytime park admission tickets in order to re-enter the park for the Halloween Horror Nights 2 event.
Halloween Horror Nights may be too intense for young children and is not recommended for children below the age of 13. No costumes, masks or face painting are allowed. Due to the event’s popularity, tickets are expected to sell out and should be purchased in advance.
For bookings and more information on the full range of packages, please log on to: www.rwsentosa.com.
About Resorts World Sentosa
Resorts World Sentosa (RWS), Singapore’s first integrated resort is located on the resort island of Sentosa. Spanning 49 hectares, the resort opened in January 2010 and welcomed over 30 million visitors in its first two years of opening. RWS is home to the region’s first-and-only Universal Studios theme park, the Maritime Experiential Museum, a casino, luxurious accommodation in six unique hotels, the Resorts World Convention Centre, celebrity chef restaurants, a world-class destination spa as well as specialty retail outlets. The resort also offers entertainment including public attractions such as the Crane Dance and the Lake of Dreams. Coming soon is the world’s largest oceanarium – the Marine Life Park. Resorts World Sentosa is wholly owned by Genting Singapore, a company of the Genting Group. For more information, please visit www.rwsentosa.com.
About Universal Parks & Resorts
Universal Parks & Resorts (UPR), a unit of Comcast Corporation’s NBCUniversal, encompasses today’s most relevant and popular entertainment experiences, creating emotional connections with guests around the world. Each year, millions of guests visit UPR theme parks to experience thrilling, world-famous attractions that use ground-breaking technology and cannot be found anywhere else. Universal Studios is a globally respected and internationally renowned theme park brand. With three-time Academy Award winner Steven Spielberg as creative consultant, its theme parks are known for some of the most thrilling and technologically advanced “ride-the-movies” motion picture and television show-based attractions. NBCUniversal owns and operates a valuable portfolio of news, sports and entertainment networks; Universal Studios, a premier motion picture company; significant television production operations; a leading television stations group; and world-renowned theme parks. NBCUniversal is 51%-owned by Comcast, with 49% owned by General Electric.

Joe Kleimanhttp://wwww.themedreality.com
Raised in San Diego on theme parks, zoos, and IMAX films, Joe Kleiman would expand his childhood loves into two decades as a projectionist and theater director within the giant screen industry. In addition to his work in commercial and museum operations, Joe has volunteered his time to animal husbandry at leading facilities in California and Texas and has played a leading management role for a number of performing arts companies. Joe has been News Editor and contributing author to InPark Magazine since 2011. HIs writing has also appeared in Sound & Communications, LF Examiner, Jim Hill Media, and MiceChat. His blog, ThemedReality.com takes an unconventional look at the attractions industry. Follow on twitter @ThemesRenewed Joe lives in Sacramento, California with his fiancé, two dogs, and a ghost.
Share
Facebook
Twitter
Linkedin
Email
Print
WhatsApp
Pinterest
ReddIt
Tumblr
Previous articleSteve Schklair is back in the realm of special venue, and he’s got the 3ality Technica 3D toolkit behind him
Next articleProSlide Supplies Attractions for Russian and Ukranian Waterparks