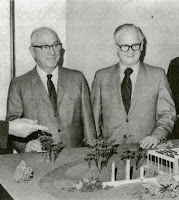 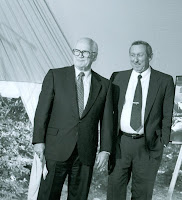 Harrison “Buzz” Price, the research economist who recommended Anaheim to Walt Disney as the location for Disneyland, passed away Sunday, August 15, at the age of 89. He had been in declining health during the last year, his family said, due to a chronic anemic condition.

“Despite his failing health, he continued to demonstrate his trademark humor, cutting edge wit and enduring love for family and friends,” his son David Price said on behalf of his mother, Anne Shaw Price, and the Price family. “His legacy of laughter, wit, love, passion and commitment leaves its mark on each of us – family, friends and colleagues in the leisure and recreation industry he loved.”

Funeral arrangements will be conducted privately by the family.

“Buzz” Price was recognized as the pioneer in the field of theme parks, resort and leisure-recreation project feasibility almost from the day in 1953 that Walt and Roy O. Disney chose him “to determine the economic feasibility of the best location for a new project – Disneyland.” Price, an engineering graduate of California Institute of Technology, had joined Stanford Research Institute after receiving his Masters in Business Administration from Stanford University.

“I asked Walt if he had a bias about the location for his Magic Kingdom,” Price recalled years later. “’Absolutely not!’ he said. ‘You tell me where the best location is.’” Price analyzed the potential sites in the Southern California area, ultimately focusing on Orange County after considering population trends, accessibility and climate factors.

They selected 160 acres of orange groves in Anaheim, just off the Santa Ana Freeway at Harbor Boulevard. “We hit it right on the nose,” Price later recalled, “dead center. That was the perfect place for it.”

Encouraged by Walt Disney, Price formed Economics Research Associates (ERA) in 1958. Ultimately, he conducted 150 studies for the Walt Disney Company (including site and feasibility analysis for Walt Disney World in Florida and Tokyo Disneyland) and “over 3,000 projects” for other clients.

“Buzz was the father of our industry of economic consulting,” notes Ray Braun, Entertainment Practice Leader for AECOM Economics (formerly ERA). “He invented the science. He was mentor to me and many of us in this practice. He set the course and paved the way for us.”

Judith Rubin
Judith Rubin ([email protected]) is a leading journalist, publicist, strategist, blogger, content marketing specialist and connector in the international attractions industry. She excels at writing about all aspects of design and technical design, production and project management. Areas of special interest include AV integration and show control, lighting design and acoustics, specialty cinema, digital video and world’s fairs. Judith has ties to numerous industry organizations. From 2005-2020 she ran communications, publications and social media for the Themed Entertainment Association (TEA). In 2013, she was honored with the TEA Service Award. She was development director of IMERSA, and co-chair of the 2014 IMERSA Summit. She was publicist for the Large Format Cinema Association in the 1990s, now part of the Giant Screen Cinema Association (GSCA) and has also contributed to the publications of PLASA, IAAPA and the International Planetarium Society. Already making her mark as a magazine and book editor, Judith joined World’s Fair magazine in 1987, which introduced her to the attractions industry. Launching as a freelancer in the mid 1990s she has contributed to dozens of publications and media outlets including Funworld, Lighting&Sound America, Sound & Communications, Urban Land, The Raconteur and The Planetarian. She joined InPark in 2010. Judith earned a Bachelor of Fine Arts from Pratt Institute. She has lived in New York City and the San Francisco Bay Area, and now makes her home in Saint Louis, where she is active in the local arts and theater community.
Share
Facebook
Twitter
Linkedin
Email
Print
WhatsApp
Pinterest
ReddIt
Tumblr
Previous articleCall for participation: IMERSA Fulldome Summit 2010 (Denver, 26-28 Oct.)
Next articlePGAV Destinations provided design services for Georgia Aquarium exhibit expansion