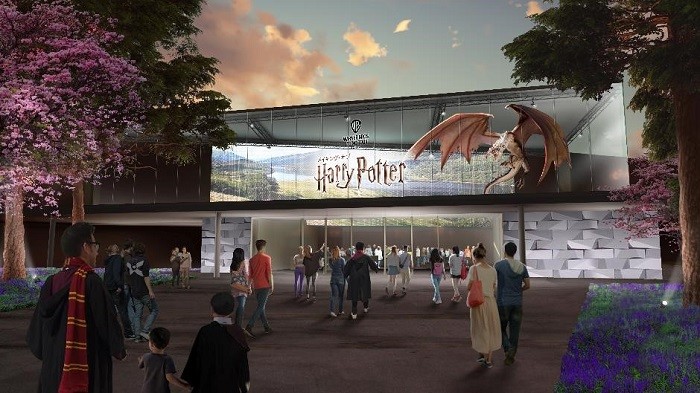 The Tokyo Metropolitan Government plans to develop a public park on a plot which includes the current grounds of Toshimaen Amusement Park which is scheduled to close at the end of August this year. The development will be conducted in a phased manner. The Studio Tour Tokyo facilities will be developed in conjunction with the development of this park. The involved parties will continue to work in cooperation with Tokyoʼs park plans in furthering the development of the Studio Tour Tokyo facilities.

The popular area is lined with carefully maintained trees and surrounded by lush greenery. Added to that, the easy access from the center of Tokyo makes the area an attractive location, the ideal setting for the Tour. The partners will create facilities suitable for this to become a popular new destination.

The Studio Tour Tokyo will be the second facility of its kind in the world, after London, and will offer a new type of experiential entertainment in Japan. Building on the success of the Harry Potter experience in London which has claimed unparalleled popularity and recognition, the indoor attraction will take visitors on a fascinating behind the scenes tour of the Wizarding World series.

Next year will mark the 20th anniversary of the release of the first “Harry Potter” film, “Harry Potter and the Philosopher’s Stone”. The Wizarding World of Harry Potter has now been passed on to the “Fantastic Beasts” series, making the franchise an enduring and much loved one by multiple generations, as adults who grew up with Harry Potter now take their own families to the theaters.

The Studio Tour Tokyo will offer special features to enable visitors to deepen their understanding of the Harry Potter and Fantastic Beasts worlds. Visitors can explore the iconic movie sets that were actually designed and built by the creators of the Harry Potter series. Showcasing original costumes and props, the indoor attraction invites visitors to experience scenes from the films firsthand and discover how the world’s favorite book series was brought to life on the screen.

The facility covers an area of about 30,000 square meters, and the exhibition space within the “sound stage” and “backlot” (outdoor filming area) zones will take approximately half a day to walk through.

Tickets allocation for the Studio Tour Tokyo will be controlled in a manner that allows the optimal number of people to be in the facility at any one time to ensure the best possible experience.

The open space just outside the Studio Tour Tokyoʼs entrance will be a landscaped area placing bespoke sculptures of mystical characters from the films, which will be accessible to the local residents and visitors alike.

The parties plan to work in cooperation with each other to proceed with the construction of the Studio Tokyo Tour, which is set to open in the first half of 2023.

“We are delighted to be working with Seibu Railway Co. Ltd, ITOCHU Corporation and Fuyo Group to bring this world-class attraction to Japan. Warner Bros. has been telling stories for almost 100 years, and Harry Potter is among our most popular and beloved. The Studio Tour Tokyo will continue this tradition while offering fans of all ages a unique way to get closer to the films and truly immerse themselves in the Wizarding World. As an established tourist destination with beautiful green spaces, Toshimaen is the perfect environment for this attraction. It is also important to us that the local community is involved in the development process, and we are looking forward to creating something very special.”

“We are really pleased to reach the agreement with Warner Bros. Japan LLC, ITOCHU Corporation, and Fuyo Group, introducing Warner Bros. Studio Tour Tokyo – The Making of Harry Potter, second only to the London, in the site of former Toshimaen Amusement Park.

“Due to the grand open in the first half of 2023, we will proceed the construction of Warner Bros. Studio Tour Tokyo, cooperating with related parties. We are also considering various sales promotions including renewal of Toshimaen Station, by the cooperation between Warner Bros. Japan LLC and Seibu group companies such as Seibu Railway, in order to revitalize the areas along Seibu line, by which we try to offer added value to the local community.”

“Regarding Warner Brothersʼ proposal for making inroads into Japan through a studio tour, ITOCHU Corporation (“ITOCHU”) considered TOSHIMAEN to be a suitable location surrounded by forest and close to central Tokyo, and made adjustments in cooperation with Seibu Railway and Warner Brothers.

“Subsequently, Fuyo General Lease Co., Ltd. joined the team and all related parties were able to start the realization of the studio tour at TOSHIMAEN.
ITOCHU will play a role in the development of buildings and intends to make every effort for the completion of a fantastic studio tour with the related parties. Playing the key role in the development of the building, ITOCHU will exert its efforts to the fullest extent to work with the team to bring the Studio Tour to its completion.”

“Fuyo General Lease sincerely welcome the Studio Tour to Japan and are very pleased to be a part of this project. We shall contribute to this project by providing Warner Bros. Japan with a long term lease of the Studio Tour facilities. While we have leased many pieces of our real estate to various customers, this is the first time the company will be contributing to this type of business. We strongly believe that our partnership with all parties involved will become an invaluable asset for us.”

Joe Kleimanhttp://wwww.themedreality.com
Raised in San Diego on theme parks, zoos, and IMAX films, InPark's Senior Correspondent Joe Kleiman would expand his childhood loves into two decades as a projectionist and theater director within the giant screen industry. In addition to his work in commercial and museum operations, Joe has volunteered his time to animal husbandry at leading facilities in California and Texas and has played a leading management role for a number of performing arts companies. Joe previously served as News Editor and has remained a contributing author to InPark Magazine since 2011. HIs writing has also appeared in Sound & Communications, LF Examiner, Jim Hill Media, The Planetarian, Behind the Thrills, and MiceChat His blog, ThemedReality.com takes an unconventional look at the attractions industry. Follow on twitter @ThemesRenewed Joe lives in Sacramento, California with his wife, dog, and a ghost.
Share
Facebook
Twitter
Linkedin
Email
Print
WhatsApp
Pinterest
ReddIt
Tumblr
Previous article
Funding, revenue, reopening and saving the animals: Museums struggle in COVID times
Next article
Christie participating in Beijing International Radio, TV & Film Exhibition online trade show