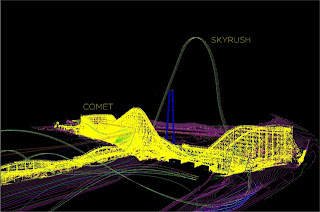 Rising out of the earth at Hersheypark will soon be a whole new breed of roller coaster – Skyrush, a mega/hyper coaster with winged seating. It will be the tallest, fastest and longest coaster in the Park.

Skyrush, which will feature cantilevered trains that are to be the first of their kind in the United States, will cost approximately $25 million and raise the number of coasters in Hersheypark to an even dozen.

The train will begin its skyward climb – at 26 feet per second – before it even leaves the station. Upon cresting the track’s peak, the train will plunge down an 85-degree descent and send riders rushing into the first of four high-speed, high-banked turns as they travel at speeds up to 75 mph.

Riders will feel the rush of five exhilarating airtime hills and transition from positive to negative gravity as they cross over the entire length of Comet, the oldest roller coaster in Hersheypark. Skyrush will travel over Spring Creek, the body of water that was a centerpiece when chocolate magnate Milton S. Hershey opened his park in 1907, and race along nearly 3,600 feet of steel track back to its station.

The third Intamin coaster in the Hersheypark arsenal, Skyrush will join crowd favorites Storm Runner, built in 2004, and Fahrenheit, built in 2008. It promises to deliver the same high-intensity thrills that Park guests have come to expect from this renowned coaster manufacturer.

Skyrush will also bring a new coaster sightline to the Comet Hollow section of Hersheypark, where it will interact with Comet, a classic wooden out-and-back coaster that dates to 1946; sooperdooperLooper, which opened in 1977 as the first steel looping coaster on the East Coast; and Great Bear, which debuted in 1998 as the first looping, inverted steel coaster in the Commonwealth of Pennsylvania.

Hersheypark, which is well known for blending the past with both the present and the future as it offers guests a one-of-a-kind experience, is reclaiming about three acres of land that have been closed to the public since 1972. The land is the site of the Park’s former “Sunken Gardens,” a popular place for early visitors to Hershey to take a stroll. The area is now being transformed not only by the new coaster, but also by a renovation that will result in the creation of a scenic observation path that’s lined by globe streetlights, fencing, trees, landscaping and flowers. The area will allow guests to reflect on the Park’s history while watching riders on a state-of-the-art mega coaster.

The coaster’s station house is being modeled after historic train stations in the Hershey area. New restroom facilities, games and food stands will replicate the Park’s buildings of yesteryear, and a new floating fountain in Spring Creek will bring back memories of days gone by.

For more information or to take a “virtual” ride on Skyrush, please visit

www.Hersheypark.com. Hersheypark will open for its 2012 summer season on May 4, 2012; Skyrush is scheduled to open later that month.