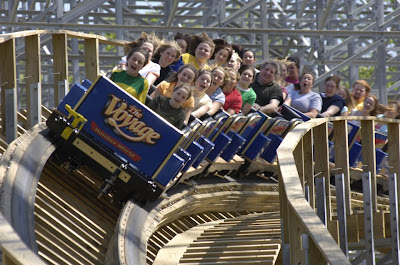 A Science Writer for the Times, Henry Fountain, visited Holiday World in early June to ride The Voyage, interview one of the ride’s designers, plus talk to roller coaster enthusiasts from all over the country who were visiting the park for its annual HoliWood Nights special event.

“Hosting a science writer from The New York Times plus a photographer and videographer for two days can be a little intimidating,” admitted Holiday World’s Director of Communications, Paula Werne. “But they were completely down to earth and fascinated with Voyage’s design and extreme forces. And when it was time for them to climb Voyage’s 16-story lifthill, I think the most intimidating factor was that big wooden coaster!”

Located in the park’s Thanksgiving section, Voyage is 1.2 miles long and provides riders with a record 24.3 seconds of “air time.” This steel-structure wooden coaster, ranked the #1 Wooden Coaster in the World five years in a row by Amusement Today, includes a record five underground tunnels, a series of dramatic drops (including a 66-degree angle of descent on the first drop), three 90-degree banked turns, and multiple track crossovers.

The online version of the article features a four-minute video of The Voyage, including interviews with one of the coaster’s designers, Chad Miller of Cincinnati’s The Gravity Group, plus Sister Michelle Sinkhorn of the Sisters of Saint Benedict in Ferdinand, Indiana.

The New York Times print edition has a circulation of nearly one million; the online version receives an average of 240 million monthly page views.

Joe Kleimanhttp://wwww.themedreality.com
Raised in San Diego on theme parks, zoos, and IMAX films, Joe Kleiman would expand his childhood loves into two decades as a projectionist and theater director within the giant screen industry. In addition to his work in commercial and museum operations, Joe has volunteered his time to animal husbandry at leading facilities in California and Texas and has played a leading management role for a number of performing arts companies. Joe has been News Editor and contributing author to InPark Magazine since 2011. HIs writing has also appeared in Sound & Communications, LF Examiner, Jim Hill Media, and MiceChat. His blog, ThemedReality.com takes an unconventional look at the attractions industry. Follow on twitter @ThemesRenewed Joe lives in Sacramento, California with his fiancé, two dogs, and a ghost.
Share
Facebook
Twitter
Linkedin
Email
Print
WhatsApp
Pinterest
ReddIt
Tumblr
Previous articleAldebo Fulldome Teams with Pufferfish for 360 Spherical Display
Next articleESPA Flagship Opening at Resorts World Sentosa