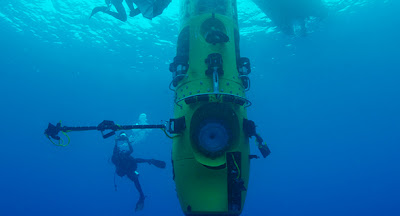 EDITOR’S NOTE: James Cameron’s themed attraction credits include three Thea Award recipients – Terminator 2 3-D: Battle Across Time (Universal Studios Florida, Hollywood, and Japan),  James Cameron’s Titanic: The Experience (Fox Studios Australia), and Titanic Official Movie Tour – along with a traveling exhibition and upcoming Disney theme park projects themed to the Avatar franchise.  Cameron is also producer and director of the IMAX 3D films Ghosts of the Abyss and Aliens of the Deep and executive producer of the giant screen film Volcanoes of the Deep Sea.  Plans call for 3D footage from the Mariana Trench expedition to be incorporated into future immersive films for museum-based theaters and Hollywood motion pictures. — JK

Washington, DC, USA (March 8, 2012) — Filmmaker and National Geographic Explorer-in-Residence James Cameron announced today that he will attempt to reach the world’s deepest point, the Mariana Trench, nearly 7 miles (11.2 km) beneath the ocean’s surface, in the coming weeks. Cameron’s dive in his specially designed submersible marks the launch of DEEPSEA CHALLENGE, a joint scientific project by Cameron, the National Geographic Society and Rolex to conduct deep-ocean research and exploration to expand our knowledge and understanding of these largely unknown parts of the planet.

Cameron’s historic DEEPSEA CHALLENGE expedition will be the first extensive scientific exploration by a manned vehicle to the Mariana Trench’s lowest point, the “Challenger Deep.” Cameron plans to spend six hours at the bottom of the Pacific Ocean trench, some 200 miles (322 km) southwest of Guam, to collect samples for research in marine biology, microbiology, astrobiology, marine geology and geophysics.

Relying on advanced engineering and technologies created by Cameron and his team, successful field tests were completed this week off the coast of Papua New Guinea. They included untethered deep-water dives — including one to a depth of more than 5 miles (more than 8 km) — in the revolutionary, single-pilot DEEPSEA CHALLENGER submersible, the result of an eight-year engineering effort and the deepest-diving manned marine vehicle in existence. The public will be able to follow Cameron’s progress on the expedition at www.DEEPSEACHALLENGE.com.

“The deep trenches are the last unexplored frontier on our planet, with scientific riches enough to fill a hundred years of exploration,” Cameron said. “National Geographic, which has been exploring the world for nearly 125 years, is the ideal partner to help usher in a new era of deep-ocean research and exploration that supports leading scientific institutions in answering questions about the deepest, unexplored parts of the Earth. Our goal is to build a scientific legacy for generations to come. It’s also to inspire people across the globe to celebrate exploration and to explore with us online and through the media we produce.”

Cameron added, “Rolex is also a natural partner in this venture — unique in having reached the Challenger Deep 52 years ago and in its celebrated, century-long history of supporting exploration and helping push the boundaries of human and scientific endeavor.”

The Challenger Deep has only been reached once in a manned descent, on Jan. 23, 1960, by U.S. Navy Lt. Don Walsh and Swiss oceanographer Jacques Piccard in the bathyscaphe Trieste. They spent approximately 20 minutes on the ocean floor before returning to the surface. Now, 52 years later, Cameron’s DEEPSEA CHALLENGER represents breakthroughs in materials science, unique approaches to structural engineering and new ways of imaging through an ultra-small, full ocean depth-rated stereoscopic camera. Cameron’s CAMERON | PACE Group, which supplies 3-D technologies and production support services, has provided the capability to document the historic expedition in high-resolution 3-D.

“Some believe the golden age of exploration is behind us. On the contrary, I believe we are at the beginning of our greatest age of exploration,” said Terry Garcia, National Geographic’s executive vice president for Mission Programs. “We salute James Cameron for his commitment to science and exploration, and we are delighted to be part of this groundbreaking adventure to the deepest and least explored point on Earth.”

In 1960, an experimental Rolex Deepsea Special watch was attached to the hull of the Trieste and emerged in perfect working order after withstanding the huge pressure exerted at 6.78 miles (nearly 11 km) below the surface. The DEEPSEA CHALLENGER submersible will carry a new experimental wristwatch, the Rolex Deepsea Challenge, strapped to its manipulator arm, renewing the pioneering engineering challenge the Swiss watchmaker took up 52 years ago with the Trieste.

“Our affinity with the deep also extends to active and sustained support of renowned marine researchers, supporting excellence and innovation in the advancement of human knowledge,” said Gian Riccardo Marini, Chief Executive Officer of Rolex SA. “I am convinced that James Cameron is bringing us to the threshold of a long-delayed revival in marine exploration. We are proud to have such a passionate and longstanding admirer of Rolex, and to return to the Challenger Deep on this historic venture to help unravel the secrets of the ocean’s deepest places.”

Cameron was named a National Geographic Explorer-in-Residence in 2011. While working on his film “Titanic,” he took 12 submersible dives to the famed shipwreck two and a half miles down in the North Atlantic. The technical success of that expedition led Cameron to form Earthship Productions, which develops films about ocean exploration and conservation. Since then he has led six expeditions, authored a forensic study of the Bismarck wreck site and done extensive 3-D imaging of deep hydrothermal vent sites along the Mid-Atlantic Ridge, the East Pacific Rise and the Sea of Cortez. Cameron has made 72 deep submersible dives, including 33 to Titanic. Fifty-one of these dives were in Russian Mir submersibles to depths of up to 3.03 miles (4.87 km).

Cameron has written and directed numerous films, among them “Avatar,” “Titanic,” “True Lies,” “Terminator 1 and 2,” “The Abyss” and “Aliens.” His films have blazed new trails in visual effects and have set numerous performance records, both domestically and abroad, including 11 Oscars for “Titanic.” “Avatar,” a 3-D science fiction epic reflecting five years of development of new production technologies, was nominated for nine Oscars and won three. “Avatar” is the highest-grossing film in history, surpassing the previous record holder, “Titanic.”

The DEEPSEA CHALLENGE expedition will be chronicled for a 3-D feature film for theatrical release on the intensive technological and scientific efforts behind this historic dive, which will subsequently be broadcast on the National Geographic Channel, and documented for National Geographic magazine. Cameron also will collaborate with National Geographic to create broad-based educational outreach materials.

Scripps Institution of Oceanography, UC San Diego, is the DEEPSEA CHALLENGE Project’s primary science collaborator. For nearly a decade, Scripps has been involved with James Cameron in developing new ways to explore and study the deepest parts of the oceans. With its decades-long history of deep-sea exploration, Scripps is recognized as a world leader in investigating the science of the deep ocean, from exploring the deep’s geological features to researching its exotic marine life inhabitants.

The expedition also is collaborating with the University of Hawaii, Jet Propulsion Laboratory and the University of Guam. Additional funding for education and digital outreach has been provided by the Alfred P. Sloan Foundation, which supports original research and public understanding of science, technology, engineering and mathematics.

Scientific research permits for the dive have been secured from authorities in the Federated States of Micronesia.

NOTE: In February, two members of the DEEPSEA CHALLENGE team, world-renowned filmmakers and explorers Andrew Wight and Mike deGruy, were killed in a helicopter crash in Australia. The team will honor their memory by moving forward with the expedition as a tribute to them and their contributions to the project.

ABOUT THE NATIONAL GEOGRAPHIC SOCIETY
The National Geographic Society is one of the world’s largest nonprofit scientific and educational organizations. Founded in 1888 to “increase and diffuse geographic knowledge,” the Society’s mission is to inspire people to care about the planet. It reaches more than 400 million people worldwide each month through its official journal, National Geographic, and other magazines; National Geographic Channel; television documentaries; music; radio; films; books; DVDs; maps; exhibitions; live events; school publishing programs; interactive media; and merchandise. National Geographic has funded more than 10,000 scientific research, conservation and exploration projects and supports an education program promoting geographic literacy. www.nationalgeographic.com.

ABOUT ROLEX
Leading brand of the Swiss watch industry, Rolex, headquartered in Geneva, enjoys an unrivalled reputation for quality and expertise the world over. Its OYSTER watches, all certified as chronometers for their precision, are symbols of excellence, performance and prestige. Pioneer in the development of the wristwatch as early as 1905, the brand is at the origin of numerous major watchmaking innovations, such as the OYSTER, the first waterproof wristwatch, launched in 1926, and the PERPETUAL rotor self-winding mechanism introduced in 1931. Rolex has registered over 400 patents in the course of its history. A truly integrated manufacturing company, Rolex designs, develops and produces in-house all the essential components of its watches, from the casting of the gold alloys to the machining, crafting, assembly and finishing of the movement, case, dial and bracelet. Rolex is also actively involved in supporting the arts, exploration, sports, the spirit of enterprise, and the environment through a broad palette of sponsoring activities as well as philanthropic and patronage programmes. www.rolex.com.

Joe Kleimanhttp://wwww.themedreality.com
Raised in San Diego on theme parks, zoos, and IMAX films, Joe Kleiman would expand his childhood loves into two decades as a projectionist and theater director within the giant screen industry. In addition to his work in commercial and museum operations, Joe has volunteered his time to animal husbandry at leading facilities in California and Texas and has played a leading management role for a number of performing arts companies. Joe has been News Editor and contributing author to InPark Magazine since 2011. HIs writing has also appeared in Sound & Communications, LF Examiner, Jim Hill Media, and MiceChat. His blog, ThemedReality.com takes an unconventional look at the attractions industry. Follow on twitter @ThemesRenewed Joe lives in Sacramento, California with his fiancé, two dogs, and a ghost.
Share
Facebook
Twitter
Linkedin
Email
Print
WhatsApp
Pinterest
ReddIt
Tumblr
Previous articleWorlds of Fun Looking to Hire 2,800 Employees for 2012 Season
Next articleLegendary Disney Songsmith Robert Sherman Passes Away at 86