Zenex Wave a Korean design and production company used Medialon Manager Show and Media Control Software with an iPad to give a chance for the audience to enjoy and experience a 3D world of virtual reality on stage.

The performance is a story told through music and dance about prisoners who lead a routine life, isolated from the outside world, and dream of freedom through a mysterious Bi-guep (a book with supernatural power), which happens to fall from the sky.

In VR BreakOut, selected as the 2010 Virtual Reality Content Support Project of the Korea Creative Content Agency (KOCCA), Zenex Wave applies holograms to a commercial stage for the first time in Korea, realizing virtual reality on the stage by combining technologies like 3D projection mapping, interactive sound and state of the art show control.

Actors perform free-style, following the main story of the production, while the holographic technology happens around them. A highlight is the holographic car in the background flying and rotates in the sky in real time.

For the holograms, 3D projection mapping, and interactive sound, Zenex Wave used various equipment and systems as Dataton Watchout media players and 5 video projectors fit with shutters to block light from the projectors. 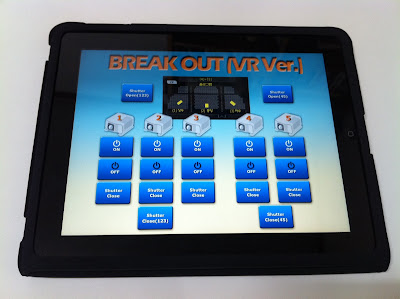 A single operator controls the entire show from an iPad through Medialon’s Manager Show Control Software, including all audio, video, and lighting.

“We made the performance become much more perfect by using a show control system so that a single operator could control these systems effectively from the video console,” declared Sin Kim Ji Hun from Zenex Wave.

The video cue menu and the projector control menu were automatically converted according to the rotation of the iPad, allowing a more efficient and easier control panel.

For the holograms, videos come from two projectors installed at the top behind the stage set out, and is reflected on the mat screen on the floor and then projected on the foil screen (optical film) mounted at a 45 degree angle.

With offices in the USA and Europe and international distributors, Medialon solutions are available worldwide.

Joe Kleimanhttp://wwww.themedreality.com
Raised in San Diego on theme parks, zoos, and IMAX films, InPark's Senior Correspondent Joe Kleiman would expand his childhood loves into two decades as a projectionist and theater director within the giant screen industry. In addition to his work in commercial and museum operations, Joe has volunteered his time to animal husbandry at leading facilities in California and Texas and has played a leading management role for a number of performing arts companies. Joe previously served as News Editor and has remained a contributing author to InPark Magazine since 2011. HIs writing has also appeared in Sound & Communications, LF Examiner, Jim Hill Media, The Planetarian, Behind the Thrills, and MiceChat His blog, ThemedReality.com takes an unconventional look at the attractions industry. Follow on twitter @ThemesRenewed Joe lives in Sacramento, California with his wife, dog, and a ghost.
Share
Facebook
Twitter
Linkedin
Email
Print
WhatsApp
Pinterest
ReddIt
Tumblr
Previous articleComcast to Sponsor New Entertainment District Adjacent to Philadelphia Sports Venues
Next articleNational Geographic Society Reorganizes Film Units