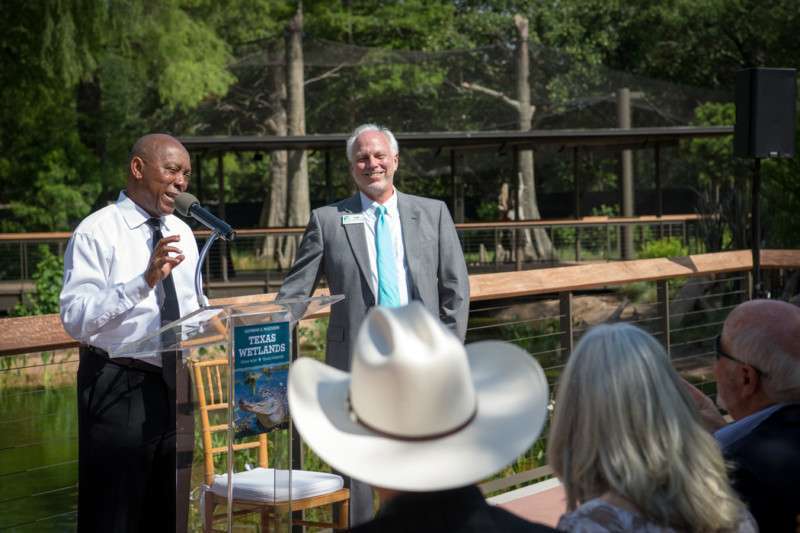 The Kathrine G. McGovern Texas Wetlands at the Houston Zoo opened to the public on Friday, May 24, just in time to kick off Memorial Day Weekend. The Texas Wetlands brings together three native Texas species—bald eagles, whooping cranes, and American alligators—in a lush wetland habitat. Thanks to the Endangered Species Act and the efforts of Texans, these three species, once close to extinction, now thrive in the Lone Star State.

During the opening ceremony, Houston Zoo president and CEO Lee Ehmke and Mayor Sylvester Turner (together in top photo) shared remarks about the importance of wetlands, and how the zoo is growing and changing to support Houston’s diverse needs.

“Thanks to generous support from Houstonians and our public-private partnership with the City, our Zoo has become a recognized leader in conservation and a top-tier destination,” said Ehmke. “Our aim with McGovern Texas Wetlands is to tell stories of hope. Bald eagles, whooping cranes, and alligators are thriving again because people took action to save wildlife.”

Forty school children from St. Francis of Assisi Catholic School participated in the opening ceremony by helping to place the final animals, amphipods, into the working wetland. Amphipods are microscopic crustaceans and important to the diversity of the working Wetlands biome.

In the heart of the zoo on the site of the former duck pond, the Houston Zoo has created a true wild wetland. Designed with living plants to filter the water for the Texas Wetlands’ animal residents and to flood and slowly release water to the bayous during heavy rains, the habitat demonstrates the importance and resilience of this valuable environment. Guests will be able to enjoy a boardwalk stroll and experience a close-up view of these important animals that Texans have helped save from extinction.

There may not be a better wildlife comeback story than the one of the United States’ national symbol, the bald eagle. In the 1960s and 1970s, the numbers of wild bald eagles plummeted from the effects of pesticides. However, due to the banning of the pesticide, and protection of the species through the Endangered Species Act, their numbers began to climb. In 2007, the avian icon was removed from the federal endangered species list. Now, Texans can see thriving wild populations of bald eagles throughout North America.

Whooping cranes are a coastal Texas treasure with a miraculous comeback story. While they are the tallest bird in North America, their time on earth was almost cut short in the 1950s when this distinctive bird nearly went extinct from hunting and habitat loss. With only a population of 20, whooping cranes were put on the endangered species list and conservation breeding programs kicked into high gear. Zoos and other conservationists worked together to save the species. Now, Texans can proudly say that there are more than 500 birds who travel from their breeding grounds in Canada to Port Aransas, Texas, each winter.

The American alligator might strike fear in the hearts of some. This fear and misunderstanding almost proved to be this 150-million-year-old creature’s demise. However, in the late 1960s, the alligator was placed on the endangered species list and started its steady comeback. By the late 80s, the alligator became so prevalent, that the “living fossil” was taken off the list. Most Texans are now so familiar with the American alligator that it’s inconceivable they were once in danger of going extinct.

This dynamic ecosystem also supports gar, snapping turtles, and a rich diversity of insects, fish, and other small animals that make up the web of life in a natural wetland.

In 2022, the Houston Zoo will celebrate its 100th anniversary by completing the most dramatic transformation in its history through a $150 million centennial fundraising campaign to support these efforts. The campaign will secure funds from individuals, foundations, corporate partners, and the Houston Zoo’s operational cash flows to complete Phase I of the master plan by 2022. Every year leading to the centennial, a new experience will open for guests to explore. Kathrine G. McGovern Texas Wetlands at the Houston Zoo is the first major construction project to open as a result of the campaign.

Joe Kleimanhttp://wwww.themedreality.com
Raised in San Diego on theme parks, zoos, and IMAX films, InPark's Senior Correspondent Joe Kleiman would expand his childhood loves into two decades as a projectionist and theater director within the giant screen industry. In addition to his work in commercial and museum operations, Joe has volunteered his time to animal husbandry at leading facilities in California and Texas and has played a leading management role for a number of performing arts companies. Joe previously served as News Editor and has remained a contributing author to InPark Magazine since 2011. HIs writing has also appeared in Sound & Communications, LF Examiner, Jim Hill Media, The Planetarian, Behind the Thrills, and MiceChat His blog, ThemedReality.com takes an unconventional look at the attractions industry. Follow on twitter @ThemesRenewed Joe lives in Sacramento, California with his wife, dog, and a ghost.
Share
Facebook
Twitter
Linkedin
Email
Print
WhatsApp
Pinterest
ReddIt
Tumblr
Previous article
Charles Myers joins Cedar Fair as SVP Creative Development
Next article
Children’s Discovery Museum of San Jose launches initiative for accessibility and inclusion of visitors of all abilities