The IAAPA trade show floor is open. So far, exhibitors I’ve spoken with seem to feel that floor traffic is down, although it’s only day one. The mood is still decidedly upbeat, with a healthy array of new ideas mixed in with some of the “classics.” 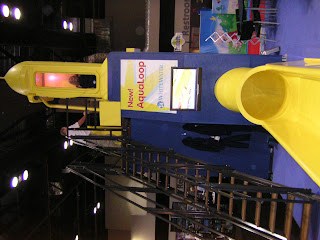 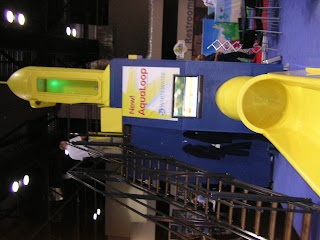 For the adventurous, Whitewater West is showcasing its dropping slide start (sans water, of course). Check out the before and after photos of one lucky visitor. 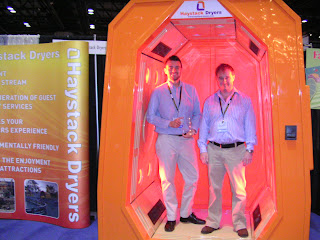 We also spoke with Wayne and Paul, from Haystack Dryers. In addition to letting me try the full sized version of their award winning family dryer unit, they were kind enough to pose for a photo. Heat lamps provide immediate warming for the skin, while filtered, purified and heated air circulates around you. According to Wayne, it’s only at half power here at the show (or else Wayne and Paul would overheat!). Next year, they should partner with the dunk tank people for coordinated demonstrations. 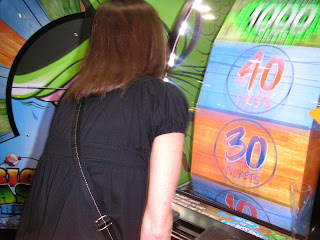 BayTek exhibited their fun new game, which borrows a popular element from the Price is Right game show. The best part is the “yooper” accent the game has, which I tried to capture on video.

Zamperla has the stand-up version of their popular tug/skateboard ride. This one is surf themed. 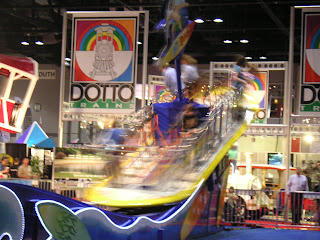 And finally, in the just for fun category, I thought it was nice that this inflatable attraction didn’t conform to the perfect body stereotype so prevalent, and instead chose a full figure model for its prototype! 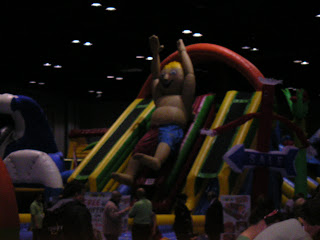 Until later, from the show floor at IAAPA…