March 2011 events in Europe demonstrate that Immersive Digital Dome Cinema (“fulldome”) has made huge strides in the past 10 years – technically, creatively and in market penetration.

Presenting at both gatherings is Dan Neafus, Operations Manager of the Gates Planetarium at the Denver Museum of Nature & Science, and co-founder of IMERSA.org. The nonprofit IMERSA (Immersive Entertainment, Research, Science & Arts) is a leading proponent of fulldome and immersive media, founded in 2008. On behalf of IMERSA, Neafus will lead a demonstration / discussion on The Language of Immersive Cinema, and the IMERSA 2011 Update – an overview of the future of large-scale immersive cinema.

“Fulldome cinema is a unique and evolving medium,” says Neafus. “Production capabilities for this challenging format have improved dramatically in the past decade, attracting new creative talent into the dome. Lacking, however, is a cinematic language that adequately describes producing for the ‘viewer-centric’ experience in the dome.” His presentations will feature examples and suggestions of ways to continue to develop the creative potential of this unique medium.

About fulldome
Digital dome cinema aka “fulldome” is an internationally emerging, dome-specific video display medium with an expanding network of theaters – currently numbering more than 700 around the world and expected to near 800 in the next year. Currently, approximately half of all fulldome theaters are in the US, but many new installations are in Asia and Europe. 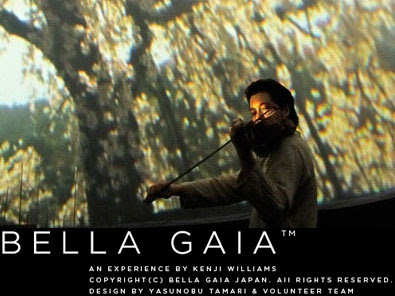 Kenji Williams performs Bella Gaia in the Vortex Dome, Los Angeles
Fulldome has its foundation in planetariums and science centers, but as the community grows, both venues and content are diversifying. Entertainment operators, houses of worship, corporate marketers, special event producers, video game developers and casinos are all showing interest in fulldome. 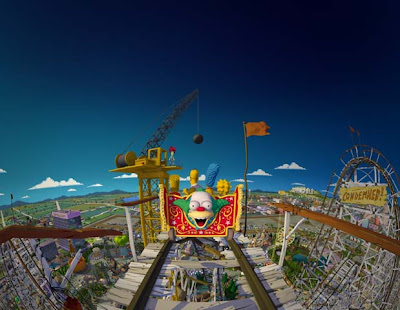 Screenshot of The Simpsons Ride. Photo: Universal Studios
As a creative medium, fulldome’s virtues include immersiveness (the ability to surround an audience with a panorama of imagery), its power to both educate and entertain, and its facility to turn a theater into a multimedia, multipurpose space.
RELATED ARTICLES FROM IPM MAGAZINE
Immersive cinema reaches new dimensions with 4D media master Markus Beyr
Fulldome theaters become cultural venues at some planetariums
The language of convergence: IMERSA fulldome summit 2010 in Denver
Giant screen filmmaker Bayley Silleck explores and explains the fulldome scene
More articles about AV, Cinema and Media

To learn more about the many fulldome-related events and festivals around the world in coming months, see the IMERSA Calendar of Events.

A sampling of digital dome theaters
In planetariums/science centers:
Trailer for Life: A Cosmic Story produced by the Morrison Planetarium
In entertainment venues and theme parks:
About IMERSA.org

IMERSA – Immersive Media, Entertainment, Research, Science & Arts – is an international non-profit professional organization that celebrates and promotes immersive and fulldome media for education and entertainment in planetariums, schools, museums, cinemas, events and attractions. Mandated to raise the profile and professionalism of its members, IMERSA bridges many disciplines including researchers, artists and technicians. IMERSA is a driver and nexus for communication, collaboration, experimentation, education and promotion of digital immersive media in a variety of formats and functions.

Fulldome UK 2011
12-13 March, Thinktank Science Museum, Birmingham
The event will focus on the use of fulldome as an artistic medium and will look to highlight the more creative and experimental applications of fulldome immersive environments, beyond the realm of astronomy education most commonly associated with digital planetariums today.

Cyprus Domefestival
18-21 March
Presented by the Cyprus Science Festival and the Kition Planetarium and Observatory at the American Academy of Larnaca. This four-day celebration of immersive film and animation will explore emerging technologies in immersive cinema, collaborations between art and science, techniques for engaging audiences and the use of immersive film in education.

Judith Rubin
Judith Rubin ([email protected]) is a leading journalist, publicist, strategist, blogger, content marketing specialist and connector in the international attractions industry. She excels at writing about all aspects of design and technical design, production and project management. Areas of special interest include AV integration and show control, lighting design and acoustics, specialty cinema, digital video and world’s fairs. Judith has ties to numerous industry organizations. From 2005-2020 she ran communications, publications and social media for the Themed Entertainment Association (TEA). In 2013, she was honored with the TEA Service Award. She was development director of IMERSA, and co-chair of the 2014 IMERSA Summit. She was publicist for the Large Format Cinema Association in the 1990s, now part of the Giant Screen Cinema Association (GSCA) and has also contributed to the publications of PLASA, IAAPA and the International Planetarium Society. Already making her mark as a magazine and book editor, Judith joined World’s Fair magazine in 1987, which introduced her to the attractions industry. Launching as a freelancer in the mid 1990s she has contributed to dozens of publications and media outlets including Funworld, Lighting&Sound America, Sound & Communications, Urban Land, The Raconteur and The Planetarian. She joined InPark in 2010. Judith earned a Bachelor of Fine Arts from Pratt Institute. She has lived in New York City and the San Francisco Bay Area, and now makes her home in Saint Louis, where she is active in the local arts and theater community.
Share
Facebook
Twitter
Linkedin
Email
Print
WhatsApp
Pinterest
ReddIt
Tumblr
Previous articleHerschend Family Entertainment and Jerry Henry & Associates Join to Launch New Research Company
Next articleThe Henry Ford Promotes Christian Overland to Executive Vice President