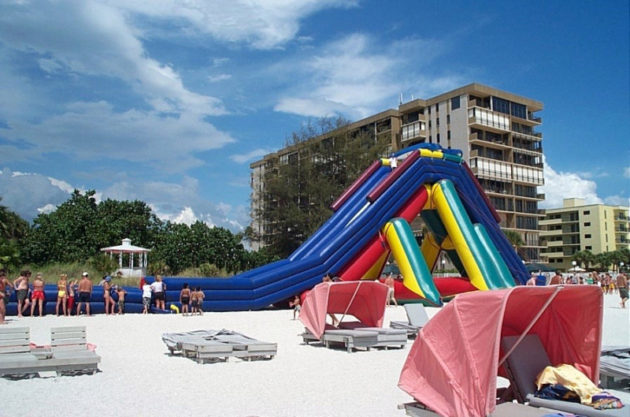 The innovative inflatable waterslides of FreeStyle

FreeStyle Slides® is a supplier of inflatable water slides offered since 2002 as an alternative to permanent water slides, and positioned to compete in the theme park and waterpark sectors. The inflatable slides are on a comparable scale to theme park attractions but considered to be temporary structures. This has enabled the company to penetrate non-traditional markets such as campgrounds, zoos, and beach resorts – in addition to serving private customers. Here are some FreeStyle Slides “greatest hits.” 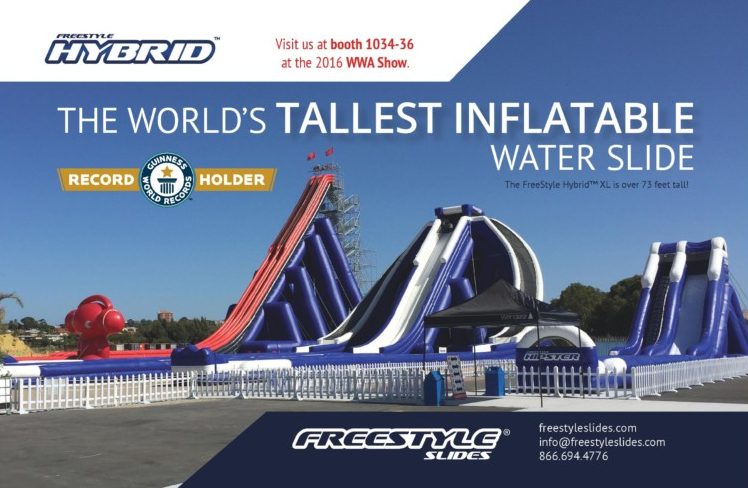 Hippo: The Slide That Started It All (pictured above)

FreeStyle Slides® installed the Hippo® at TradeWinds Island Resorts in St. Pete Beach, Florida in 2002 and an industry niche was born. Fourteen years have passed and the mutually-beneficial partnership between FreeStyle Slides and TradeWinds is still going strong. 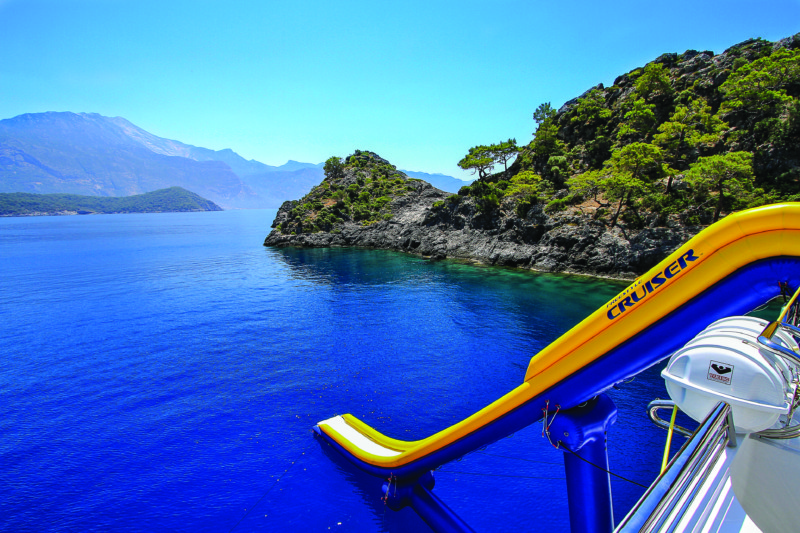 A Hybrid of Land and Sea 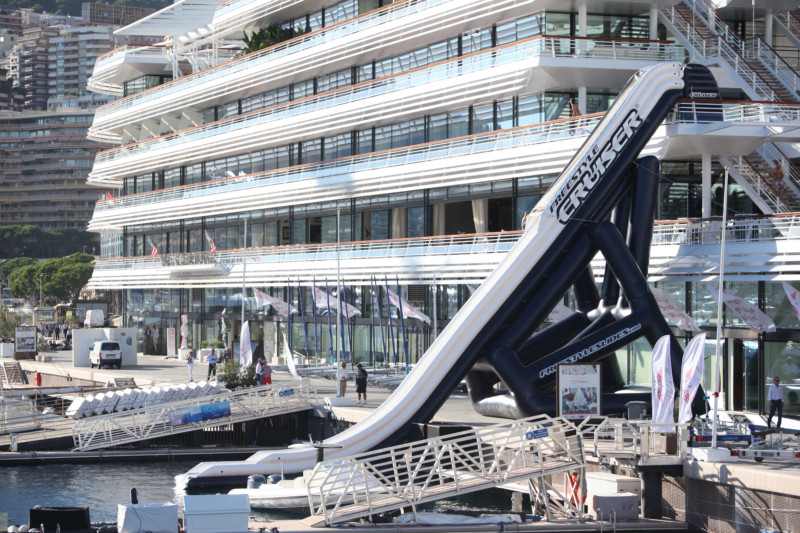 The engineering team at FreeStyle Slides never backs down from a challenge, especially when it comes as a request from a member of Monaco’s royal family. Combining elements of its land slide with its Cruiser yacht slide resulted in the first Hybrid® slide. This landmark slide was installed on the third story deck of the Yacht Club de Monaco in 2014. Riders slide 15 meters down before plunging into the Mediterranean. FreeStyle Slides custom Hybrids can launch from scaffolding or an existing structure and run into a slide landing bed or a body of water. 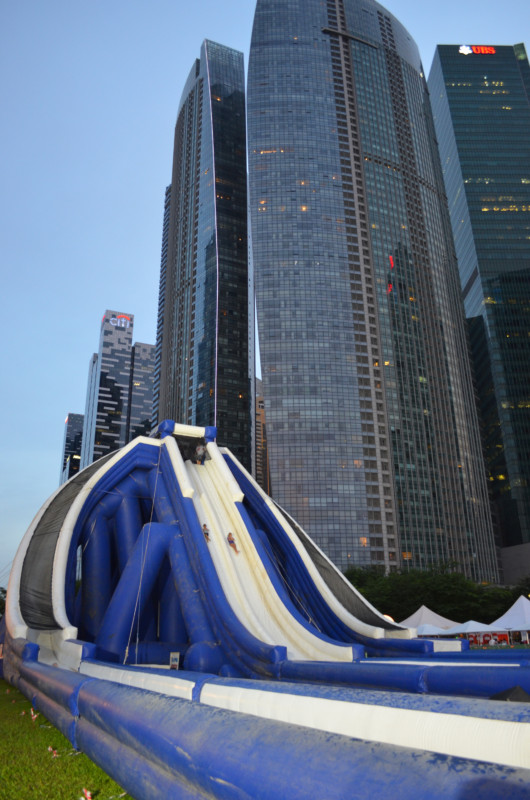 The FreeStyle Trippo® was created in 2012 after the Tradewinds Island Resort requested a slide that would top their Hippo. The first Trippo stood 36’ tall – the same height as the original Hippo – but featured three slide paths, resulting in a novel, 3-lane inflatable waterslide. The TrippoXL (pictured left) made its debut in 2016 in Australia measuring a whopping 50’ tall. 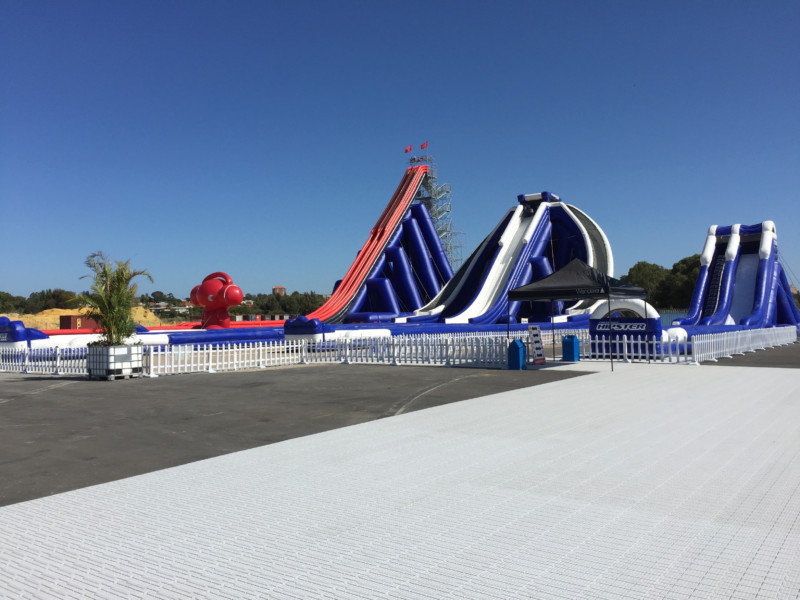 FreeStyle Slides created a soaring 73-foot+ tall HybridXL for a private customer in Perth, Australia. “The Drop” was named the world’s tallest inflatable water slide by the Guinness Book of World Records. Thrill seekers can ride The Drop at Splash City Perth in the near future.

In addition to designing and manufacturing their own products, the team at FreeStyle Slides is often called upon to produce inflatable products on behalf of other companies. We were honored to collaborate with industry leader WhiteWater West in 2012 to produce inflatable versions of their FlowRider and WaveOz simulated surfing systems. Slide to Safety also partnered with FreeStyle Slides to produce a Rapid Evacuation Slide that provides an alternative method of evacuation from multi-story buildings in the event of dangerous situations. “Our engineering team enjoys the challenge of creating solutions for our partner companies,” says FreeStyle Slides CEO, Stephen Philp. • • •

Joe Kleimanhttp://wwww.themedreality.com
Raised in San Diego on theme parks, zoos, and IMAX films, InPark's Senior Correspondent Joe Kleiman would expand his childhood loves into two decades as a projectionist and theater director within the giant screen industry. In addition to his work in commercial and museum operations, Joe has volunteered his time to animal husbandry at leading facilities in California and Texas and has played a leading management role for a number of performing arts companies. Joe previously served as News Editor and has remained a contributing author to InPark Magazine since 2011. HIs writing has also appeared in Sound & Communications, LF Examiner, Jim Hill Media, The Planetarian, Behind the Thrills, and MiceChat His blog, ThemedReality.com takes an unconventional look at the attractions industry. Follow on twitter @ThemesRenewed Joe lives in Sacramento, California with his wife, dog, and a ghost.
Share
Facebook
Twitter
Linkedin
Email
Print
WhatsApp
Pinterest
ReddIt
Tumblr
Previous articleQuality AND Quantity
Next articleFun with Fabrication