Inside the time machine 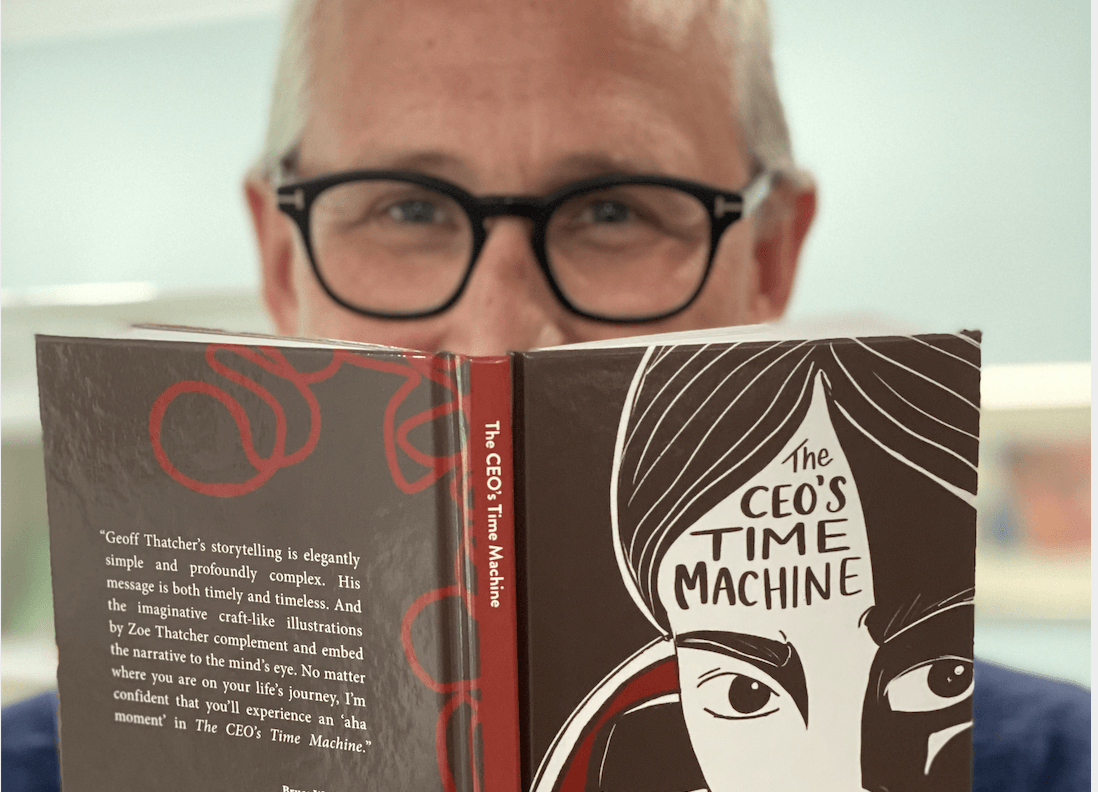 Creative Principals’ Geoff Thatcher says now is the time for themed entertainment designers to create their own IP and delivers his own with The CEO’s Time Machine.

When COVID-19 hit, firms in the industry looked for ways to innovate and contribute. Geoff Thatcher, who founded the small experience design firm Creative Principals in 2017, believes one of the ways to do that is through IP. As projects went on hold and the world turned upside down, he turned to a short story he had written in 2016.

The CEO’s Time Machine is a quick and enjoyable read with 43 stunning illustrations. It’s a business parable that takes readers on an unexpected journey with a successful CEO and his anticipated successor. Will everyone agree with the conclusions drawn from the story? Perhaps not, but it’s provocative and gets the reader to think. That alone is a marker of a successful book. More importantly, this project kept the team at Creative Principals, including a few key regular contractors, busy. Working with publisher Casa Flamingo Literary Arts and IAAPA Hall of Fame inductee Tim O’Brien, they published the book and had it up on Amazon in four weeks.

I recently had the opportunity to ask Geoff for some background on the book and the lessons behind it.

Where did you develop the idea for The CEO’s Time Machine?

In 2016 I was working on a project with JRA in Saudi Arabia for the King Abdullah Foundation. We were partnering with The History Factory and I immediately connected with their CEO Bruce Weindruch. What intrigued me about Bruce’s philosophy is that while his company is about history, he always starts with the future. In fact, he wrote a book called Start with the Future and Work Back. The premise of the book is that an organization’s future is dependent on leadership understanding the company’s past. So, on one of my many flights back and forth to Riyadh, I started thinking about time. And I started writing.

Originally, I published this short story in the summer of 2016 through four different LinkedIn posts. And the posts just sat there. I think about five people read them. I always thought it was a good story, but I felt like it needed strong visuals to bring it to life.

What inspired you to publish the book now?

In October 2019, I told our new designer Zoe that she could use company time to participate in the Instagram challenge #inktober because I saw Randy Ewing at Thinkwell doing the same. On October 29th, she posted a black and white sketch featuring a girl with a red scarf. When I saw it, I immediately thought, “Wow, this would be a great illustration style for The CEO’s Time Machine.” Zoe is an amazingly talented designer. I’m biased, of course, because she’s my daughter.

Although Zoe played around with some character design, we honestly were just too busy on other projects to really invest any time in it. About the only thing we’d figured out by March 2020 was the character design for our hero “the protégé” and that we never wanted to show the CEO’s face. And then COVID-19 hit!

When we realized the economy was shutting down mid-March, I immediately turned to Zoe and said, “We are going to work harder than ever before. Let’s get that book published before the lockdown ends.” So, while Zoe worked on 43 illustrations, I called Tim O’Brien and asked if he would be willing to publish a book in four weeks. Thankfully, he said “YES!” Tim’s a boutique publisher and that was exactly what we needed to get the work done. We brought on Carrie Oneal to do the typography and layout. I absolutely love how Carrie worked with Zoe’s illustration for our cover. We also brought in Callie Stoker as an editor. She agreed to rush us to the front of the queue.

It’s hard to describe, but I personally felt this urgent desire to “DO SOMETHING” and do it quickly. I had people tell me it was a huge mistake to publish a book in the midst of a pandemic, but I honestly believe there is no better time for the creative minds in our industry to generate their own intellectual property. Now is the time to dust off that novel, song, podcast or whatever, and start generating your own IP.

It also felt good to invest in a very small way back into the economy. Like almost everywhere else, so many projects have been put on hold. So, it was fun working on something, even if small. It felt great actually paying some of our regular freelance partners.

Why did you opt to write the book like it was a theme park attraction?

If you love the theme park industry, one thing you’ll quickly notice is that the book is written like a ride. There’s an iconic entrance to the experience—a garage door. Then our CEO and his protégé wind their way through a queue full of stuff. Next, they end up in what amounts to a pre-show. And finally, there is the main attraction as they step into the time machine. This Experience Model works far beyond our industry and is really about psychology more than anything else.

First, we want to ATTRACT people into the experience. Second, we want to build TRUST and provide some context. Third, we want to INFORM them and give them the tools they need to move forward in their journey. Fourth, we want them to INTERNALIZE the story – it’s about emotion! Fifth and finally, we want them to ACT. This is the model we use in all of our work and it’s the model I used to write the book. So yes, The CEO’s Time Machine is a ride!

Are the characters modeled after anyone from your career?

The protege is modeled after so many people who simply never got the chance to be “plucked” out of their work by a leader who saw potential. One theme of this book is that leaders often do a horrible job of identifying talent. There have been so many examples of leaders who not only let visionaries leave their company, but actually fired them! I’ve experienced this in my own career where a leader doesn’t believe in you and doesn’t believe in your potential. That can be crushing. So, the protege in this book is really a substitute for anyone who has felt like their ideas and their potential was ignored. Also, we made the protege a woman because there is a well-documented history of women being overlooked in the workplace. We wanted our story to enable and inspire.

There are plenty of theme park references in the book, but it feels like your audience is larger than that.

While I think people in the industry will like this book because it’s written like a ride, it is also a business parable. We think it will appeal to leaders as well as young people just starting their careers. The lessons in this book apply across vertical markets. Whether you are an accountant or a designer, the lessons apply equally. This book is for everyone.

What lessons do you hope people learn from the book?

There are three lessons I want people to take from this book. First, do not ignore the past. Second, be decisive in the present. And third, listen to the young people in your organization because they are, quite literally, your future. There are other lessons people can absorb, such as the ethical dilemma toward the end of the story. What’s been interesting to me is that people tend to takeaway a different lesson depending on their own personal experiences. And I love that!

What other writing have you done?

I worked my way through a journalism degree working at an amusement park and then after a few years in newspapers, my first job in the “industry” was as a creative writer at JRA. I’ve written a coming of age novel set in an amusement park, but it isn’t ready to be published yet. I helped research and ghost write a book on leadership communication back in 2002. I’ve posted a ton of short essays on LinkedIn. And, of course, I write every day at work.

Despite COVID-19, we have one project still active and it has involved a lot of writing for both me and Colette Piceau from It Ain’t Shakespeare Inc. In my opinion, she is one of the best writers in our industry. In fact, I think too many people don’t understand that writing is a creative process. Too often in this industry, people want to brainstorm and workshop an idea forever rather than allowing one creative writer to go away and write. Writing, rather than talking, is what truly helps you figure things out. In fact, when I started writing The CEO’s Time Machine, I had no idea how it was going to end.

What books and shows have inspired you?

One of my all-time-favorite books about the industry is Walt’s Revolution!: By the Numbers by Harrison “Buzz” Price, which also happens to have been published by Tim O’Brien. When it comes to fiction, Zoe is a huge Brandon Sanderson fan so I’ve been reading his novels. I also love sci-fi time travel shows, from all those amazing time travel episodes in Star Trek to even corny romances like Somewhere in Time.

Where can people order a copy?

The book is available for sale on Amazon, Barnes & Noble and other online retailers. You can find more information and links to these sellers at www.ceotimemachine.com

ISE postponed until spring due to Omicron