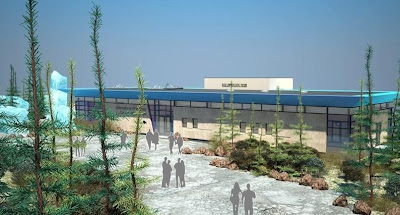 Winnipeg, Manitoba, Canada (January 23, 2012) — The International Polar Bear Conservation Centre, which will care for orphaned, injured, and problem polar bears, opens today at Assiniboine Park Zoo.  The modern new facility is a key component of the new Journey to Churchill exhibit currently under construction at the Zoo as part of the Assiniboine Park Conservancy’s overall $200 million redevelopment plan.

Journey to Churchill, designed by Portico Group, is one of the most comprehensive projects ever undertaken in Canada aimed at issues related to climate change, polar bears and other northern species.  This fully integrated initiative combines elements focused on research conservation, education and public display to provide a venue that will bring the North to mainstream Canadians while bridging the gap between field research, the conservation world and the general public.

When complete, Journey to Churchill will feature polar bears – as well as other species – in three distinctive zones along the fascinating 10-acre route.  In each zone, visitors will experience a variety of landscapes and animal viewing areas.  Interpretive signage, interactive displays, and audio-visual components will reinforce the messages of biodiversity, climate change and conservation.  The Zoo describes each zone in the exhibit as follows:

Zone One: Wapusk Lowlands
Visitors head from the prairies through the boreal forest, where they will see moose, black bears, whooping cranes and gray wolves, and head north to the expanse of the tundra.  With the sound of the wind in their ears, they round a corner and see the snowy owls, while caribou stand alert on a hill behind them.  To their left, arctic foxes play in the grasslands while musk ox graze on the rise above and higher still, the first glimpse of the mighty polar bear.  With no visible barriers between the species, visitors will experience the vastness of the tundra.  Interpretive content will describe the age, scale, fragility, and beauty of the tunda and the many species that depend on it.

Zone Two: Gateway to the Arctic
The Gateway to the Arctic will be a primary viewing point for polar bears and ringed seals.  Interpretive media helps visitors learn about physiological adaptations to life on and under the sea ice.  From inside a 10 foot wide acrylic tunnel, visitors will be provided the rare opportunity to view these creatures from below the surface of the water.  The large swimming area provides physical exercise and a place to frolic and dart between the ice chunks.  With only a clear wall bisecting the two species habitats, the polar bears and seals see and smell each other, creating a dynamic and enriching environment.  This interaction between the seals and polar bears will be part of what puts this exhibit at the forefront of arctic zoo experiences.

The domed Aurora Borealis Theatre will be a place of wonder and awe.  With the play of the northern lights above and the encircling wall projecting a 360 degree horizon, visitors will appear to stand in a vast expanse of Arctic landscape.  Through a short film, they watch the Arctic’s seasonal beauty unfold and learn about the people, plants and animals that live in Canada’s northland.  After hours, the theatre becomes a dramatic backdrop for storytelling or concerts.

Zone Three: Churchill Coast
By their very nature, parks are places where families and friends can come together to have fun, celebrate important occasions, or just relax and take time out.  This immense social value is part of the “glue” of a healthy society.  The Churchill Coast brings all of these elements together in the culmination of the Journey to Churchill.

With a façade resembling the town of Churchill, visitors will feel as though they have been transported to the northern frontier.  The landscape will include bear dens that can shelter a bear on a hot summer’s day, or house a mother bear with her new cubs.  Visitors can watch the bears from the Tundra Grill, a 150-seat restaurant, while they enjoy their lunch.  The adjacent Polar Playground is designed to engage children in a polar-themed wonderland of active participation.

Journey to Churchill is scheduled to be completed in October 2013.

Joe Kleimanhttp://wwww.themedreality.com
Raised in San Diego on theme parks, zoos, and IMAX films, Joe Kleiman would expand his childhood loves into two decades as a projectionist and theater director within the giant screen industry. In addition to his work in commercial and museum operations, Joe has volunteered his time to animal husbandry at leading facilities in California and Texas and has played a leading management role for a number of performing arts companies. Joe has been News Editor and contributing author to InPark Magazine since 2011. HIs writing has also appeared in Sound & Communications, LF Examiner, Jim Hill Media, and MiceChat. His blog, ThemedReality.com takes an unconventional look at the attractions industry. Follow on twitter @ThemesRenewed Joe lives in Sacramento, California with his fiancé, two dogs, and a ghost.
Share
Facebook
Twitter
Linkedin
Email
Print
WhatsApp
Pinterest
ReddIt
Tumblr
Previous articleThe Chuck Jones Experience: A Review
Next articleLondon Eye Becomes Interactive