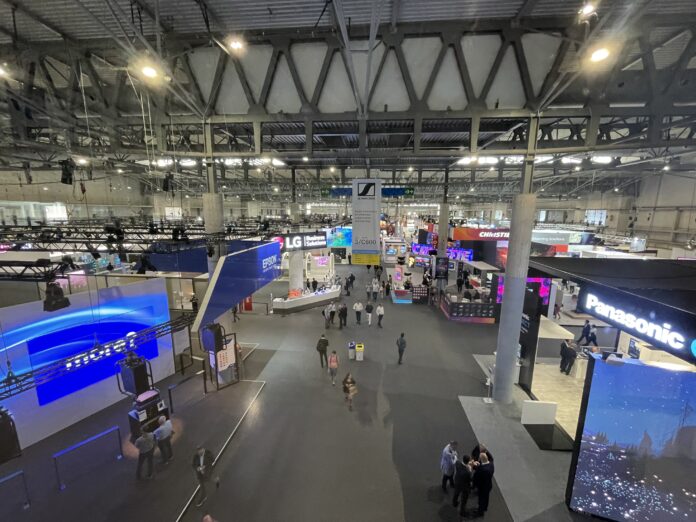 A fellow journalist and I both recently commented on how challenging things still are in the industry. Yes, people are headed to the destination theme parks with money in hand, and presumably this trend will extend to regional attractions this summer. But some companies have seemed to fare better than others, and as a publication that serves our industry vendors, our success depends on a healthy market for all.

One litmus test came in the form of the Integrated Systems Europe (ISE) conference in Barcelona May 10-13, 2022. The show had been rescheduled from February due to the pandemic. Would the event be well-attended?

Walking into the multi-hall exhibit space felt like a return to the past. Electronics juggernauts like Sony and Panasonic had giant, towering booths, reminiscent of the last ISE event I attended in Amsterdam (2019). Some booths featured spaces larger than many restaurants, crammed full of tables, coffee (or maybe beer?) and people – all in the name of connecting buyers to sellers.

Visually, there appeared to be plenty of both, and the official numbers back it up. ISE reported over 43,000 attendees visited 834 exhibitors booths spread out over 48,000 square meters.

Here, in no particular order, are some of the things those buyers saw.

On the projector front, the Griffyn series now offers a 4K50 version, with up to 50,000 lumens coming out of the same size box as the 4K32. The added brightness is particularly useful for video mapping projects. The new M series projector illuminated the Christie logo above the booth, with its Rec 2020 color profile that Christie’s Director of Sales Joe Graziano called “punchy and bright, with amazing color.”

The booth was protected by two CounterAct disinfecting fixtures overhead. Each unit offers a 45-degree cone of coverage and sits about 22-feet above the ground. The lights disinfect the air by inactivating airborne viruses.

Barco was represented in multiple spaces on the show floor, including in the new Immersive Art Experience. Inside, 34 G60 projectors covered the walls and floors to create an enveloping projection space, highlighting different artists through different, short shows. The space was a welcoming respite for attendees looking to escape the crowds on the show floor.

Inside their booth, Barco used four 40,000 lumen 4k projectors to map an eight-sided diamond with short-throw lenses to avoid shadows. The images featured on the diamond were integrated with their new TruePix LED wall, creating a cohesive show set. TruePix features a fully automatic install – each panel senses its neighbors and self-aligns. LED batch compatibility is guaranteed up to ten years.

Finally, Barco has partnered with Ernst & Young to create an Eco-Score system to help buyers understand which products are the most environmentally friendly. They are currently working towards having 70% of new product launches qualify for the Eco-Score designation.

Kinetic, the turnkey media server solution from Modulo Pi is getting an update. When version five is released later this year, the system will have more functionality with different sensor inputs. Knobs, buttons, RFID tags and LIDAR scanners are only a few of the types of inputs available for creative studios to use in planning exhibits and interactives. Modulo Pi’s booth combined all of those inputs and a projection mapped table to create a mini simulation experience for guests to try their hand at.

Modulo Pi hopes designers will be creative with the options and push interactivity to new levels. All current Kinetic clients will have access to the new features when the update is released.

The Pixera Four RS is a special model designed for the rental staging market, featuring a dedicated configuration designed to ease set up and use in multiple venues.

Featured in the Illuminarium experiences, Holoplot’s speaker matrix arrays target sound precisely to different spaces within one room. The system can steer sound vertically or horizontally based on the designer’s decisions. More importantly, it can easily be changed without having to rehang the array of speakers. For example, a single array of Holoplot speakers could be directed to send sound towards stadium stands during an afternoon game and then down at the stadium floor during an evening concert without touching the rig.

Holoplot brought an array of speakers to ISE and offered demos for attendees. Demos of the equipment will continue at InfoComm (June 8-10) in Las Vegas.