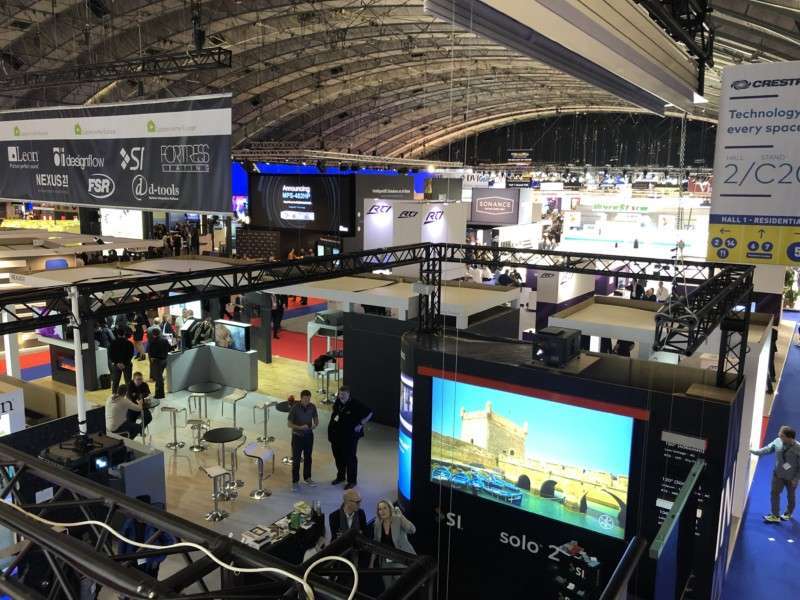 “The world’s largest exhibition for AV and integration systems” gathers in Amsterdam. InPark checks in on the annual expo and conference.

More than ever, AVIXA and exhibitors at the show are realizing the transformative effect AV is having on a variety of markets. As themed entertainment has expanded into retail, hospitality, museums and more, AV technology has been a partner in that process. That connection is apparent from the breadth of products available and from how exhibitors present them at the show.

ISE bills itself as “the world’s largest exhibition for AV and systems integration,” and the numbers appear to stack up. Over 81,000 attendees visited 15 halls (several of them temporary tent structures added on to Amsterdam’s RAI Center) to see the latest from 1,301 exhibitors. By comparison, 2018’s InfoComm in Las Vegas (also organized by AVIXA) saw nearly 43,000 attendees and 964 exhibitors.

While some areas target specific niche markets, such as conference rooms or home theaters, the vast majority of exhibitors are bringing products applicable to a variety of experiences. Many of them understand how valuable AV is to the modern attractions and guest experience landscape.

Media-based attractions are ubiquitous and rely on a wide range of AV technology, with big industry players always on the lookout for ways to enhance the guest experience, competing not only with other attractions, but also with in-home entertainment. Frequently, this means finding the latest technology in projectors and LED screens, which were in ample supply at ISE. More pixels, crisper resolution, higher lumens…it’s almost like the bigger, taller, faster roller coaster wars of the 1990s. Competition and advances in technology are also encouraging suppliers to create product versions at price points that encourage venues of all budget-sizes to look at how they can better integrate AV into their offerings.

Here, then, is InPark’s brief walk through the ISE expo, highlighting only a few of the many technology marvels on display.

The Pixera GUI guides users through three main tabs. Every single tab allows for a different point of view and point of access to the overall creative setup. “Screens” offers users an overview of their project space where they can arrange their screens, LED walls, objects etc. “Mapping” is where warping, softedge adjustment and output routing happens. Within the “Compositing” tab, users can be creative and use content to create and program their shows. Live rendering allows for immediate feedback for the programmer for a professional finished product.

Pixera integrates with AV Stumpfl’s suite of products and has a very flexible API, allowing it to work with other manufacturers’ control systems and components, such as Medialon and Panasonic GeoPro. Pixera also simplified the process for mapping 3D objects. It is designed to serve a wide range of market verticals including theme parks, museums and visitor attractions.

“With Pixera we focused on creating ease and usability in a system designed for experienced professionals and those entering the world of professional video playout for the first time,” said Stucken.

UK-based 7thSense Design, known for the durable Delta media server product as well as other server and show control systems, debuted the new Pico server. Pico is smaller and ruggedized, making it ideal for dark rides or motion platforms. It integrates with the full line of 7thSense products.

7thSense also showcased their newest software, Compere, which oversees controls hardware, and can also be used for confidence monitoring. For example, within a multi-screen attraction Compere monitors what is happening in all the media, and includes a live feed of media, allowing operators to monitor the content remotely. It also provides easy and precise warping and blending, intelligently knowing where to combine images. In the near future, Compere will also be able to be used for system visualization.

Italy’s Powersoft has a reputation for manufacturing pro-audio amplifiers. They transformed their existing technology into a new product line after learning The Lava Center in Iceland wanted to simulate an earthquake for guests. Powersoft created a 1.5 meter platform that can replicate earthquakes up to magnitude 6.0 on the Richter scale (though it typically operates at a 3.2 level). This was achieved through the use of M-Force, an innovative transducer based on a patented moving magnet linear motor structure developed by Powersoft for its amplifiers. The development of this system led the way to the creation of the Mover product line.

Similar to M-Force, Mover uses a moving magnet linear motor to create low-frequency vibration. The product began testing in September 2018 and has been available in the market since February 219. Mover is designed for high efficiency and minimal maintenance. Some of the areas Powersoft anticipates the Mover will be popular include rides, VR systems, gaming, cinema, 4D attractions as well as in industrial applications.

With offices in the USA, Canada and China, Christie is primarily recognized for their line of projectors and accompanying software and equipment. They have long been involved in the attractions marketplace, and have been focusing on specific product solutions for that space. Christie View (previewed by InPark during the IAAPA Expo 2018) allows up to four users to see different content on the same screen at the same time, each at 60fps, resulting in a total rate of 240fps. Christie View is expected to be available in May. Interest has predominantly been from the LBE market, although some film studios and gaming operators have also explored Christie View’s possibilities.

The D4K40-RGB pure laser projector enjoyed its European debut during ISE. In addition to its unique, all-in-one design and the advanced high frame rate and color capabilities, the projector can be oriented in any direction and only requires single phase power. As we mentioned in our April 2019 article on RGB laser projection, [“Christie: Screens to fill, markets to disrupt,” InPark issue #77] a most important attribute is that RGB laser technology facilitates a leap forward in the color space a projector can produce. The ability to support the expansive Rec. 2020 color palette is something to delight audiences with visual richness and range (think art and nature) – while also able to fulfill business needs with its precision (think branding and IP).

Meanwhile, the beloved Christie MicroTiles have been re-engineered as MicroTiles LED. The new MicroTiles LED route both signal and power through a single PoE Cat6 Ethernet cable. MicroTiles LED have been designed to eliminate alignment requirements, drastically increasing installation speed. The tiles communicate to one another to automatically match color and brightness across the wall. Displays can be designed in nearly any configuration, including convex and concave walls or 90-degree inside and outside corners.

Belgium-based Barco offers a wide line of projectors, LED screens, image processing and visual display systems. Through an acquisition, they also offer Medialon show controls, popular with the attractions industry. At ISE 2019 Barco introduced its brand new G60 series of one-chip laser phosphor projectors. Available in 7,000-, 8,000- and 10,000-lumen versions the G60 is designed to create straightforward and cost-effective displays while enabling existing lenses to be re-used. At the same time, Barco has nudged up the brightness of its industry-leading F80 one-chip laser phosphor range, adding a 12,000 lumen version with the same vivid, 4K color quality. It’s all part of Barco’s goal of providing ever greater brightness from the same technology, “without compromising on color quality, footprint, noise or price.”

Higher up the Barco range the same process is happening. Barco’s established three-chip laser phosphor large venue projector, the UDX, is already popular for building-mapping, concerts, arenas and sports events. Now the UDX has been upped to a maximum of 40,000 lumens. Later this year Barco plans to bring out a new UDX series with a brightness of around 14,000-22,000 lumens. This new range will be compact, about half the weight of today’s UDXs, and at a competitive price point.

With a home office in Germany, VIOSO has a product suite of both hardware and software solutions designed to simplify the projector alignment and calibration process. During ISE, VIOSO released Anyblend 5 – its latest software to automatically align projection systems, thanks to new patented algorithms. With the help of a standard camera, VIOSO Anyblend is able to convert an image seen by the camera in 2D into a 3D surface. How does it work? Projected dots create splines and the camera essentially ‘connects the dots.’ The camera is then able to identify the specificities of the 2D view and uses an advanced method to build a splice based on what the dot pattern should look like. The result is a better and smoother projected content on any 3D surface.

Based in Switzerland, Barix manufactures a full line of audio solutions products, with an emphasis on audio distribution and paging systems. During ISE Barix presented a new concept coming to market: The Paging Cloud. Expected later this year the system uses existing paging systems to broadcast to mobile phones. The device “hears” a page, records it and then forwards it to the cloud. Guests then receive a notification on their phone, and click a link to listen to the message.

Guests opt in to the program and the small box doesn’t change anything operation-wise for the attraction. Barix is keen on hearing from people who want to run a trial – especially amusement park operators. • • •

Joe Kleimanhttp://wwww.themedreality.com
Raised in San Diego on theme parks, zoos, and IMAX films, Joe Kleiman would expand his childhood loves into two decades as a projectionist and theater director within the giant screen industry. In addition to his work in commercial and museum operations, Joe has volunteered his time to animal husbandry at leading facilities in California and Texas and has played a leading management role for a number of performing arts companies. Joe has been News Editor and contributing author to InPark Magazine since 2011. HIs writing has also appeared in Sound & Communications, LF Examiner, Jim Hill Media, and MiceChat. His blog, ThemedReality.com takes an unconventional look at the attractions industry. Follow on twitter @ThemesRenewed Joe lives in Sacramento, California with his fiancé, two dogs, and a ghost.
Share
Facebook
Twitter
Linkedin
Email
Print
WhatsApp
Pinterest
ReddIt
Tumblr
Previous articleSeaWorld terminates agreements with Zhonghong Holding for China-based parks and attractions
Next article2019 TEA Summit and Thea Awards