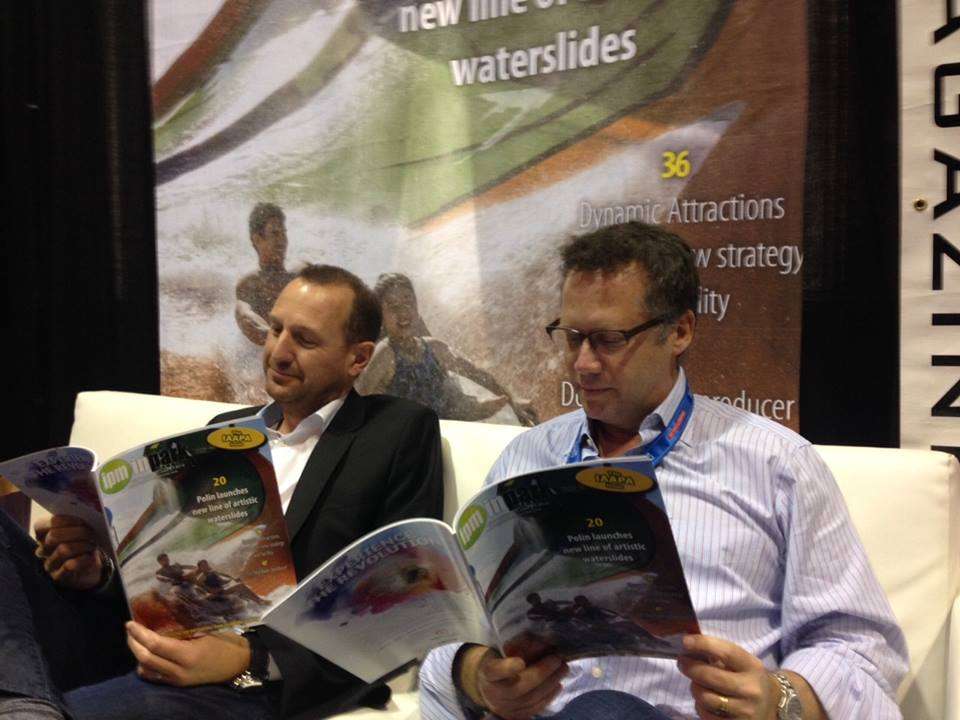 ABOVE: Greg Lombardo and Scott Ault check out the latest IPM issue at the 2015 IAAPA Attractions Expo. Read our interview with Greg about his new role as Head of Experiences at Netflix inside issue 79.5.

People with an eye for detail may have noticed that this is InPark issue #79.5. It’s a rather odd number for a magazine, so maybe a little explanation is in order.

After establishing the editorial calendar for this year, we got feedback from readers that our post-IAAPA issue reached folks at a time when many were heading home for the holidays or otherwise intending to take a break from work.

Instead, there seemed to be interest for more coverage both right before the IAAPA Expo and then during the week of the Orlando show. In that way, an IAAPA preview issue could help drive readers to certain booths or events at the show, while an issue released the week of the show would allow companies who were planning to make announcements during the expo have a story ready to go in print.

This seemed like a good idea and has allowed us to bring you two issues nearly back-to-back full of exciting news, in-depth reporting and trend-watching.

This presented us with a small numbering challenge, however. As IAAPA 2019 will mark InPark’s 15th anniversary, we wanted a nice round number like issue 80 to align with that event. Issue 81 got pushed into 2020, then the concept of issue 79.5 was born and subsequently added into the schedule.

So enjoy 79.5, our IAAPA preview issue, and get ready for 80 to launch on Tuesday, November 19th – opening day of IAAPA Expo 2019, and InPark’s 15th anniversary. Both issues will be available at the InPark booth (#1773) and in the publication rack at IAAPA Central. We’ll see you there!

Joe Kleimanhttp://wwww.themedreality.com
Raised in San Diego on theme parks, zoos, and IMAX films, Joe Kleiman would expand his childhood loves into two decades as a projectionist and theater director within the giant screen industry. In addition to his work in commercial and museum operations, Joe has volunteered his time to animal husbandry at leading facilities in California and Texas and has played a leading management role for a number of performing arts companies. Joe has been News Editor and contributing author to InPark Magazine since 2011. HIs writing has also appeared in Sound & Communications, LF Examiner, Jim Hill Media, and MiceChat. His blog, ThemedReality.com takes an unconventional look at the attractions industry. Follow on twitter @ThemesRenewed Joe lives in Sacramento, California with his fiancé, two dogs, and a ghost.
Share
Facebook
Twitter
Linkedin
Email
Print
WhatsApp
Pinterest
ReddIt
Tumblr
Previous articleJoe Kleiman: Fan power
Next article#79.5 – IAAPA Expo Preview