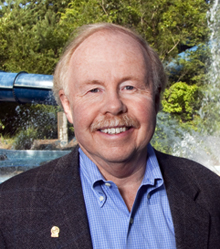 The International Association of Amusement Parks and Attractions (IAAPA) today announced James “Chip” Cleary has been named president and CEO. He will take over the top staff position at the worldwide trade association on April 4, 2011.
“Chip’s proven leadership acumen, diverse and extensive experience in the attractions industry, and his years of service as an active volunteer and leader within IAAPA make him ideally qualified to lead the association as president and CEO,” said IAAPA Chairman Bob Rippy. “Chip will use his knowledge of our industry and his passion for the success of our members to elevate the products and services we offer around the world.”
A 30-year veteran of the attractions industry, Cleary has been a partner in and/or managed a variety of attractions including amusement parks, family entertainment centers, and waterparks.
Cleary started his career in the industry in 1978 at Adventureland Amusement Park in Farmingdale, New York. He worked his way up through a number of positions to serve as vice president, where he oversaw the rebuilding and operation of the park.
In 1991 Cleary supervised the design and construction of Splish Splash waterpark on Long Island, New York, and served as the park’s president until 1999. Cleary and his partners sold Splish Splash to Palace Entertainment in 1999, and Cleary joined Palace’s executive team as vice president of the waterpark division. Splish Splash is consistently rated one of the top waterparks in the United States.
Palace Entertainment was purchased by Spain-based Parques Reunidos in 2007 and Cleary was named senior vice president to oversee the company’s portfolio of waterparks in the U.S. In 2008 Lake Compounce was added to his group.
Cleary has been an active volunteer in IAAPA for nearly 15 years. He served on the association’s exhibitor awards, government relations, safety and maintenance, and conference and trade show advisory committees and chaired the membership, strategic planning, compensation, and executive committees. Cleary also led the team that produced the Kickoff Event at IAAPA Attractions Expo for the past four years. He served two terms on the board of directors and was elected third vice chairman in 2007. He served as second and first vice chairman in 2008 and 2009 respectively and he was chairman of the board in 2010.
Cleary graduated magna cum laude in 1973 from the New York Institute of Technology with a Bachelor of Fine Arts degree. He is a past chairman of the board for the Amusement Council of the New York State Hotel Motel Association and has served on the boards for the Long Island Convention and Visitors Bureau and the Miller Place Civic Association.
About IAAPA
IAAPA is the premier trade association for the attractions industry worldwide. Founded more than 90 years ago, IAAPA is the largest international trade association for permanently situated amusement facilities and attractions worldwide and is dedicated to the preservation and prosperity of the attractions industry. IAAPA represents more than 4,000 facility, supplier, and individual members from more than 90 countries. Member facilities include amusement/theme parks, waterparks, attractions, family entertainment centers, arcades, zoos, aquariums, museums, science centers, resorts, and casinos. IAAPA is a nonprofit organization.

Judith Rubin
Judith Rubin ([email protected]) is a leading journalist, publicist, strategist, blogger, content marketing specialist and connector in the international attractions industry. She excels at writing about all aspects of design and technical design, production and project management. Areas of special interest include AV integration and show control, lighting design and acoustics, specialty cinema, digital video and world’s fairs. Judith has ties to numerous industry organizations. From 2005-2020 she ran communications, publications and social media for the Themed Entertainment Association (TEA). In 2013, she was honored with the TEA Service Award. She was development director of IMERSA, and co-chair of the 2014 IMERSA Summit. She was publicist for the Large Format Cinema Association in the 1990s, now part of the Giant Screen Cinema Association (GSCA) and has also contributed to the publications of PLASA, IAAPA and the International Planetarium Society. Already making her mark as a magazine and book editor, Judith joined World’s Fair magazine in 1987, which introduced her to the attractions industry. Launching as a freelancer in the mid 1990s she has contributed to dozens of publications and media outlets including Funworld, Lighting&Sound America, Sound & Communications, Urban Land, The Raconteur and The Planetarian. She joined InPark in 2010. Judith earned a Bachelor of Fine Arts from Pratt Institute. She has lived in New York City and the San Francisco Bay Area, and now makes her home in Saint Louis, where she is active in the local arts and theater community.
Share
Facebook
Twitter
Linkedin
Email
Print
WhatsApp
Pinterest
ReddIt
Tumblr
Previous articleGiving classical opera another dimension – Principal Large Format produces ‘Carmen 3D’ for Royal Opera House and RealD
Next articleSIX FLAGS NAMES FAMOUS FAMIGLIA OFFICIAL IN-PARK PIZZA PARTNER