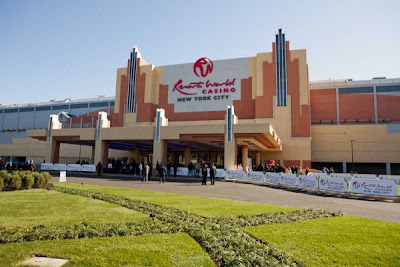 “Located within the Aqueduct Racetrack complex, Resorts World is an extraordinary example of creative repositioning and adaptive reuse. Working with Genting, we have transformed an aging landmark into a vibrant and energetic entertainment destination,” said Peter Stevens, President of JCJ Architecture. “Not only will Resorts World donate one percent of pre-tax profits to the local community, it has also created more than 1,350 permanent jobs for the city’s residents.”

“Embodying Genting’s design philosophy, we abandoned traditional, windowless casino notions and reinvented a brighter aesthetic that is more vibrant and uplifting,” said Brian Davis, Design Principal of JCJ Architecture, who along with Bill Dow, Principal, led the project. “Everything from the vaulted ceilings to the 60-foot chandelier in the lobby to the ornate detailing of the terrazzo floors evokes a sense of grandeur and expansiveness.”

Resorts World, designed to be ‘uniquely New York,’ subtly incorporates design elements that celebrate many of the most iconographic features of the city. Each of the casino’s three levels reflects a distinctive atmosphere inspired by a New York City landmark:

“Our vision for Resorts World was to create a vibrant venue with entertainment options that appeal to a broad audience,” added Mike Speller, President of Resorts World Casino New York. “Through our collaboration with JCJ Architecture, that vision has become a reality, and now one of the greatest cities in the world has a gaming and entertainment destination it can call its own.”

Proposed future phases at Resorts World include a multi-billion-dollar, multi-million-square-foot convention center and hotel, making it the premier conference destination for both domestic and international markets.

ABOUT JCJ ARCHITECTURE
Founded in 1936 and headquartered in Hartford, Connecticut, JCJ has offices in San Diego, Phoenix, New York City and Boston. The firm is recognized nationally as one of the country’s most respected architectural firms, providing clients with comprehensive planning, programming, architectural and interior design, project management and construction administrative services. With a long-standing reputation for creativity, excellence and business acumen, JCJ Architecture works across a broad range of industries including hospitality, education, civic, science and technology and commercial design. For more information, visit www.jcj.com.

Joe Kleimanhttp://wwww.themedreality.com
Raised in San Diego on theme parks, zoos, and IMAX films, Joe Kleiman would expand his childhood loves into two decades as a projectionist and theater director within the giant screen industry. In addition to his work in commercial and museum operations, Joe has volunteered his time to animal husbandry at leading facilities in California and Texas and has played a leading management role for a number of performing arts companies. Joe has been News Editor and contributing author to InPark Magazine since 2011. HIs writing has also appeared in Sound & Communications, LF Examiner, Jim Hill Media, and MiceChat. His blog, ThemedReality.com takes an unconventional look at the attractions industry. Follow on twitter @ThemesRenewed Joe lives in Sacramento, California with his fiancé, two dogs, and a ghost.
Share
Facebook
Twitter
Linkedin
Email
Print
WhatsApp
Pinterest
ReddIt
Tumblr
Previous articleReynolds Provides R-Cast Acrylic to Three New Aquarium Projects
Next articleKenneth S WIlliams Named New CEO and Executive Director ETC @ USC