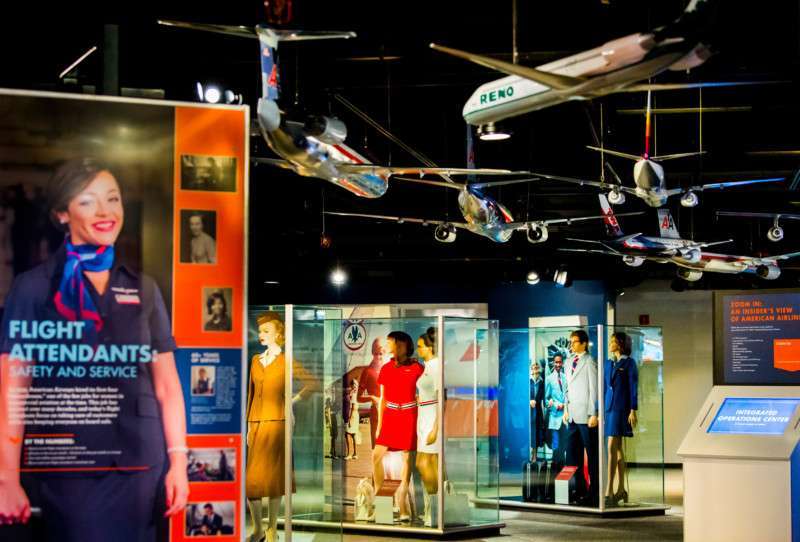 The American Airlines CR Smith Museum has recently re-opened following the successful completion of a redesign of its permanent exhibitions.

The redesign, made possible through a lead donation by the American Airlines Group and gifts by PACMIN and Boeing, marks the first major redesign in the museum’s 25-year history.

“Despite how common air travel has become, many aspects of airline operations still are frequently misunderstood. The redesign takes a fresh approach to explain the inner workings of airline operations and showcases the very people who run American Airlines every day,” said Uli Das, Executive Director of CR Smith Museum. “Our goals were twofold: Establish a point of pride for American Airlines team members and their unique professions and create a learning opportunity for the general public. Ultimately, the museum’s new focus will generate and infuse more local interest in joining the American Airlines team.”

More than 300 American Airlines team members volunteered to help during the process of developing the new content and exhibits, which are designed to give museum visitors insight into the various roles of American team members and how they work together to support a global operation. New signature exhibits include the Airline Command Center, enabling guests to make tough operational decisions; an authentic McDonnell Douglas MD-80 cockpit, including a guided tour of the switches and buttons provided by an American MD-80 Captain; and a baggage loader exhibit where visitors try their hand at loading baggage in the shortest time possible.

“JRA is excited to have been involved on this unique project,” said Matthew Wheeler, JRA Senior Project Director. “The daily complexity and magnitude of running an airline every day is truly amazing when you think about it. In the end, it’s all about American Airlines’ employees. It’s their combined passion, dedication, and experience that make the world’s largest airline function. Our job was conveying this story in an interactive, educational, and compelling way.”

The CR Smith Museum is an independent nonprofit organization located on the American Airlines campus. The museum plays an important role in preserving and celebrating the history of American Airlines and the aviation industry, as well as educating visitors about the science of flight, airline operations and aviation careers.

“We want to give every visitor a glimpse into the roles of team members, and expose students, including many from Title I schools, to career opportunities in aviation that they otherwise would have not known about,” said Das.

Joe Kleimanhttp://wwww.themedreality.com
Raised in San Diego on theme parks, zoos, and IMAX films, InPark's Senior Correspondent Joe Kleiman would expand his childhood loves into two decades as a projectionist and theater director within the giant screen industry. In addition to his work in commercial and museum operations, Joe has volunteered his time to animal husbandry at leading facilities in California and Texas and has played a leading management role for a number of performing arts companies. Joe previously served as News Editor and has remained a contributing author to InPark Magazine since 2011. HIs writing has also appeared in Sound & Communications, LF Examiner, Jim Hill Media, The Planetarian, Behind the Thrills, and MiceChat His blog, ThemedReality.com takes an unconventional look at the attractions industry. Follow on twitter @ThemesRenewed Joe lives in Sacramento, California with his wife, dog, and a ghost.
Share
Facebook
Twitter
Linkedin
Email
Print
WhatsApp
Pinterest
ReddIt
Tumblr
Previous article
Efteling to replace bobsleigh ride with new dual track family coaster
Next article
Holiday World to replace Kringle’s Kafe with larger Santa’s Merry Marketplace in 2019