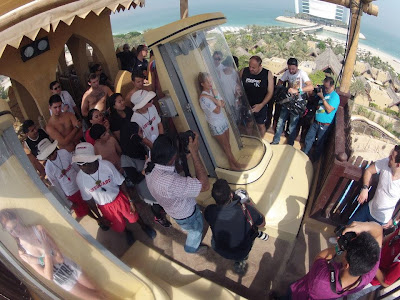 Dubai, UAE — Wild Wadi Waterpark, which forms part of the Jumeirah Group, unveiled the latest addition to the park to the public today, the new and improved Jumeirah Sceirah.

“I am very excited to be part of Dubai’s newest adventure and take part in the inauguration of such a fun experience,” said Mohammed Saeed Harib.

Guests experiencing the ride will make their way up a towering height of 32 metres where they will stand on a trap door, unable to see what the slides hold below. They will then be released by the trap door, rapidly descending down the 120 metre slide through a tunnel at an astonishing speed of over 80 km/h.

“We are delighted with our latest addition to Wild Wadi. Jumeirah Sceirah was always the most popular and iconic ride in our water park and we are excited for its return. Hopefully the ride will attract thrill-seekers eager for adventure from all over,” said Chris Perry, General Manager of Wild Wadi water park.

Now in its thirteenth year, Wild Wadi water park is Dubai’s favourite family destination offering over 30 rides and attractions for all ages.

Wild Wadi Waterpark, which forms part of the Jumeirah Group portfolio, was launched in 1999 and is one of the largest of its kind outside of North America. Situated between sister properties Burj Al Arab, Jumeirah Beach Hotel and Madinat Jumeirah, Wild Wadi Waterpark is located on Jumeirah Beach Road, a leisurely half hour drive from Dubai International Airport.

13 of the 31 rides are inter-connected , allowing thrill seekers of all ages to experience one adrenaline rush after another without ever leaving the water. The recently launched Tantrum Alley and Burj Surj will soon be joined by an exciting new tandem ride that replaces the iconic Jumeirah Sceirah. The two slides both reach 32m with a length of 120m.

Created by WS Atkins, the engineering and design consultancy firm behind Burj Al Arab and Jumeirah Beach Hotel, Wild Wadi Waterpark is designed around a tale from Arabian folklore featuring Juha and his seafaring friend, Sinbad. The design and attention to detail, including characters to support the theme, led to a World Waterpark Association Industry Innovation Award for Outstanding Accomplishments in Design and Theming in its opening year.

Joe Kleimanhttp://wwww.themedreality.com
Raised in San Diego on theme parks, zoos, and IMAX films, InPark's Senior Correspondent Joe Kleiman would expand his childhood loves into two decades as a projectionist and theater director within the giant screen industry. In addition to his work in commercial and museum operations, Joe has volunteered his time to animal husbandry at leading facilities in California and Texas and has played a leading management role for a number of performing arts companies. Joe previously served as News Editor and has remained a contributing author to InPark Magazine since 2011. HIs writing has also appeared in Sound & Communications, LF Examiner, Jim Hill Media, The Planetarian, Behind the Thrills, and MiceChat His blog, ThemedReality.com takes an unconventional look at the attractions industry. Follow on twitter @ThemesRenewed Joe lives in Sacramento, California with his wife, dog, and a ghost.
Share
Facebook
Twitter
Linkedin
Email
Print
WhatsApp
Pinterest
ReddIt
Tumblr
Previous articleNational September 11 Memorial & Museum Hosts Successful Gateway Ticketing User Group Meeing
Next articleWater Wars to Showcase New Products at IAAPA 2012

UAE: From The Palm to The Frame