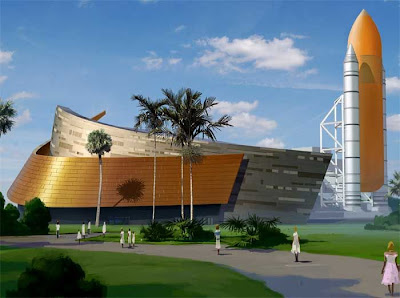 St. Louis, MO, USA — PGAV Destinations, a global leader in the planning and design of entertainment and cultural destinations, is pleased to announce the ground breaking for its premier project at the Kennedy Space Center in Florida – the future home for space shuttle Atlantis.

“We are honored to design the future home for Atlantis,” states Mike Konzen, Principal PGAV Destinations. “We anticipate that thousands of people who worked on the Space Shuttle Program as well as millions of visitors from around the world will enjoy being so close to this national treasure.”

The $100 million, 65,000 square-foot Atlantis exhibit will be the marquee feature of the Visitor Complex’s 10-year master plan, completed by PGAV Destinations on behalf of Delaware North Companies Parks & Resorts, which has operated Kennedy Space Center Visitor Complex for NASA since 1995.The exhibit will provide guests an extraordinary and unique opportunity to view Atlantis up close and “in flight.” Guests will learn how the spacecraft worked in space as well as the story of the 30-year Space Shuttle Program, through a number of hands on, interactive and immersive mediums.

The exterior of the Atlantis exhibit will be comprised of two sweeping architectural elements, or “wings” representing the space shuttle’s launch and return. The outer layer of the building will be cloaked in iridescent hues of orange and gold, representing the fiery-glow of reentry. The taller, internal wing of the building will be covered in a shimmering tile pattern in varying tones of gray, designed to represent the tiled underside of the orbiter. 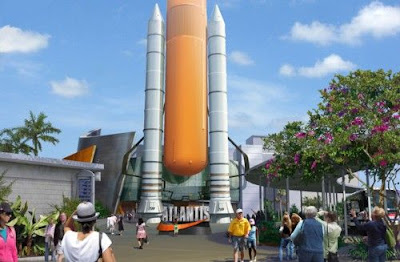 At the entrance to the exhibit, guests will be greeted by a full-size, upright, replica external tank and two solid rocket boosters. On the opposite side of the tank and booster assembly, a silhouette of the orbiter is attached to illustrate its exact size and placement. A 184-foot-tall space shuttle stack will give visitors a true sense of the massive size and awesome power used to thrust the space shuttle into low-earth orbit. Atlantis will be shown with payload bay doors open and the Canadarm extended. In the distance, a sliver of sunrise is revealed as the orbiter emerges from the far side of its 90-minute orbit around the earth. 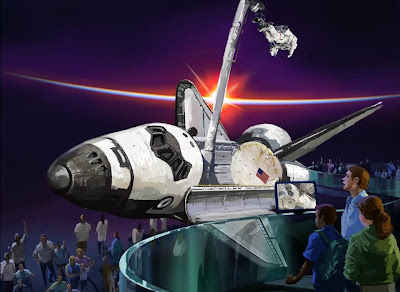 “This is an incredible day for our nation’s space program,” stated Bill Moore, Chief Operating Officer, Kennedy Space Center Visitor Complex, at the groundbreaking ceremony with a host of dignitaries, including space and tourism industry representatives, and astronauts.

“Today marks the start of a new era in which this magnificent ship, Atlantis, which has traveled to space and back an astounding 33 times, will remain docked in her home port, displayed in all her glory with a new mission to uphold — to inspire a new generation of space explorers who will take us to even greater heights. We are extremely proud and excited to break ground today on what will be the crown jewel of our 10-year master plan for Kennedy Space Center Visitor Complex.”

The grand opening of the showcase facility is slated for summer 2013. Constructed by Whiting-Turner Contracting Company in Orlando, the six-story exhibit will be located in the Shuttle Plaza adjacent to the existing Shuttle Launch Experience.

PGAV Destinations is a global leader in the planning and design of unique destinations. The firm uniquely combines award-winning storytelling and creativity with business strategy to create some of the world’s most important cultural, heritage, and natural destinations. PGAV develops growth-oriented master plans and translates these plans into innovative new destination products. Now in its fifth decade, the firm has authored hundreds of highly successful projects in places such as SeaWorld, the Grand Canyon, Biltmore Estate, The Gettysburg Battlefield, the Georgia Aquarium, Kennedy Space Center, and Busch Gardens. http://www.pgavdestinations.com

Joe Kleimanhttp://wwww.themedreality.com
Raised in San Diego on theme parks, zoos, and IMAX films, InPark's Senior Correspondent Joe Kleiman would expand his childhood loves into two decades as a projectionist and theater director within the giant screen industry. In addition to his work in commercial and museum operations, Joe has volunteered his time to animal husbandry at leading facilities in California and Texas and has played a leading management role for a number of performing arts companies. Joe previously served as News Editor and has remained a contributing author to InPark Magazine since 2011. HIs writing has also appeared in Sound & Communications, LF Examiner, Jim Hill Media, The Planetarian, Behind the Thrills, and MiceChat His blog, ThemedReality.com takes an unconventional look at the attractions industry. Follow on twitter @ThemesRenewed Joe lives in Sacramento, California with his wife, dog, and a ghost.
Share
Facebook
Twitter
Linkedin
Email
Print
WhatsApp
Pinterest
ReddIt
Tumblr
Previous articleGlobal Immersion Transforms Fleet’s IMAX Dome Into Fulldome Digital Cinema
Next articleTrack Complete for Busch Gardens Williamsburg’s 2012 Coaster – Verbolten